As Air New Zealand prepare to launch yet another wacky safety video, we look back at all those that have gone before 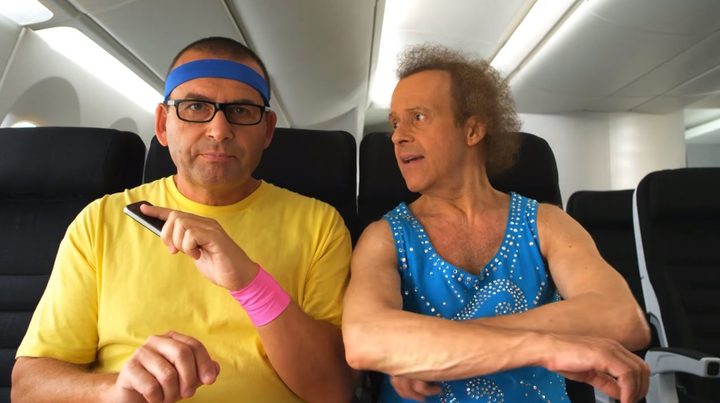 Planes are great but also scary and, as anyone who has seen Lost will know, when things go wrong they can go really wrong.

It goes without saying then, that safety is vital, yet with all the excitement of air travel (Holidays! Inflight movies! Plane food!) more than a few of us are guilty of phasing out when safety announcement time rolls around.

Thank goodness then that Air New Zealand isn’t a regular airline - it's a cool airline. It wants to make safety fun and for nearly a decade that is exactly what it's done with a bevy of crazy characters with amusing yet informative safety messages for all.

The latest in the quest for the perfect piece of inflight safety-tainment will debut Wednesday and, with extremely current and not at all random Hollywood celebs Katie Holmes and Cuba Gooding Jr set to star, one can only imagine the wacky times awaiting the skies.

But to see the future we must look to the past.

This was a simpler time. Obama was inaugurated. Lady Gaga and Beyonce released 'Telephone'. And an Air New Zealand advertising exec posed the question: “How can we get people to watch boring airline safety videos?”

The answer was naked people.

A creature of unspecified origin, in terms of both species and nationality, Rico was a furry, sleazy, possibly European sex pest who, for one magical year, become Air New Zealand’s mascot.

Though Rico’s time was short lived, he managed to make quite an impact by interviewing Lindsay Lohan while she was on home detention, making a “rap video” with Snoop Dog, appearing on Campbell Live and finally being murdered by Richard Simmons.

SPEAKING OF RICHARD SIMMONS, before he went mysteriously missing the '80s fitness guru was kind enough to use some of his celebrity to help Air New Zealand keep passengers’ safe, usurping Rico after his untimely death. What better way to get people to use their seatbelts than by having a reclusive figure from yesteryear scream at them?

Because in New Zealand we can never just be cool about things, a safety video to coincide with the release of Peter Jackson’s cash-cow The Hobbit came to be and it was exactly as grim as it sounds.

However, lest Middle Earth failed make an impact, that same year Air NZ employed Kiwi Two and a Half Men star Melanie Lynskey and the granddad from Modern Family to voice (but not actually appear in) an animated safety short to the dulcet tones of the Naked and Famous.

I must have travelled a lot in 2013 because the Bear Grylls safety video is forever burned into my mind and also acts to represent the moment when Air New Zealand began to lose their already tenuous grip on how plane related airline safety videos really need to be. Sadly Bear does not get an opportunity to drink his own urine or whatever it is he usually does, but the video does feature a cameo from much beloved bug man Ruud Kleinpaste to warn him not to eat glow worms.

The same year also saw a Betty White safety video which was much better because at least people like Betty White.

In 2014, controversy hit when Air New Zealand got sexy and sexist with a video featuring models from glorified lad mag Sports Illustrated drew the ire of people who think that women are for more than just looking nice in bikinis. The ad ran for about half the year before being dropped, not because of outrage or a petition which gathered more than 10,000 signatures, but rather because Air New Zealand had always planned to abrubtly cut it after 6 months and replace it with the previous year's Bear Grylls one. I mean isn’t that how ads work?

Things got grim in 2015 when, having presumably decided to play things safe post-bikinigate, Air New Zealand took inspiration from a film made in 1997 and made a Men In Black themed safety video. Featuring Rugby players Dan Carter and Richie McCaw, my darling Stan Walker (Stan, WHY) and ORIGINAL MEN IN BLACK CAST MEMBER RIP TORN, the video also includes a wisecracking, rapping pug dog. Hmm.

Once again departing from what the fairly elementary theme of "aircraft", the most recent safety video bestowed on us by our friends at Air New Zealand features Flight of the Conchords star Rhys Darby and US actress Anna Faris (introduced as “the hot blonde from Scary Movie and Mom” in case viewers don’t know what she’s from or whether she’s hot) pretending to make movies at Universal Studios. What a romp!

Which of course brings us to the present: Can Katie Holmes and Cuba Gooding Jr live up to these amazing achievements in airline safety history? We can but wait and see.