“Our safety matters more than your reputation” 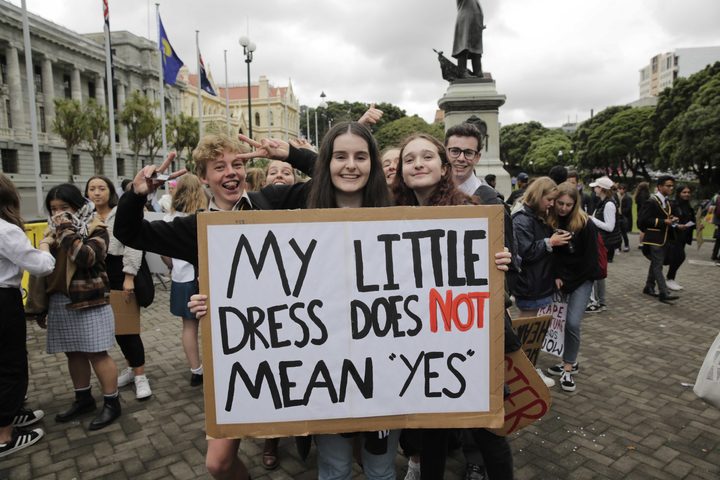 Hundreds of people packed the lawn outside Parliament this afternoon to protest against rape culture and call for consent to be taught in schools.

The crowd of mostly school students chanted “No means no” and held up signs that read “Our safety matters more than your reputation” and “Real men are feminists”.

They were there after a nightmare week for two Wellington schools.

Last Tuesday, it was revealed two Wellington College boys had posted messages in a private group about having sex with drunk and unconscious girls.

One of the protest’s organisers, Wellington High School student Norma McLean, told the crowd it was important they send a message that “the buck stops here”.

Deputy Prime Minister and Minister for Women Paula Bennett said she would have expected her granddaughters to feel safe by now, but that didn’t seem to be the case.

The mood on the banks was positive, and a good third of the crowd was made up of young men who were applauded for joining in.

One of those was Raven Bax, a Year 12 student at Wellington High School, who held up a sign saying “Boys will be boys who respect girls”.

“I took it on myself to come here and try to learn from other people,” he said.

“At first I was a little nervous to come here as a male, but as soon as I got here I felt welcome and realised women want us to help.”

Anj Barton is a criminology student at Victoria University. She said the protest was against “everything that’s wrong with the world right now - feminism is activism”.

“If we don’t try to educate people about sex and equality, we’re never going to get anywhere. The girls who have organised this are so brave and we need to stand in solidarity with them.”

Year 13 student Eleanor McIlraith’s sign read “My little dress does not mean ‘yes’.” She said rape culture is a massive issue and it was vital for young people, including boys, to stand up for equality.

Jean Donaldson’s sign said “Our safety matters more than your reputation”. “We’re all part of the feminist club at Wellington High School, which has opened my eyes,” she said.

“I’m angry with the world right now and being here is about trying to bring about change.” 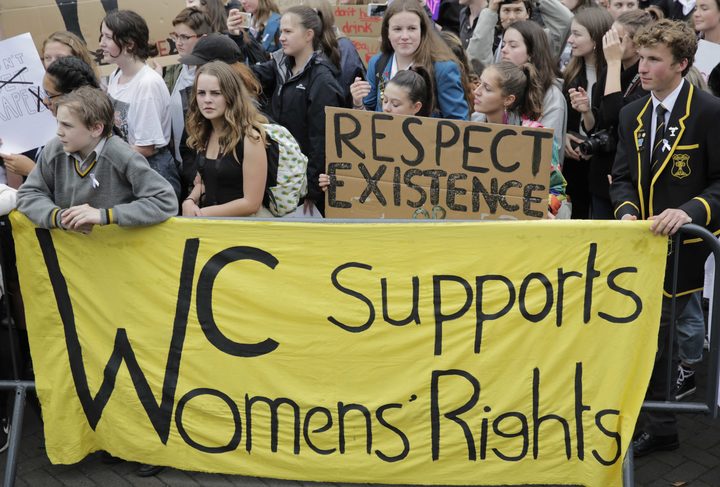 Wellington College has been at the centre of the controversy. Photo: Max Towle/The Wireless 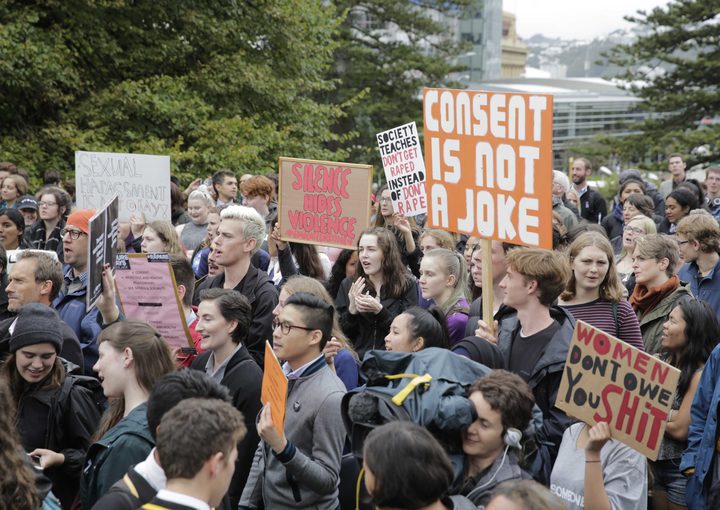 The protesters chanted "No means no". Photo: Max Towle/The Wireless 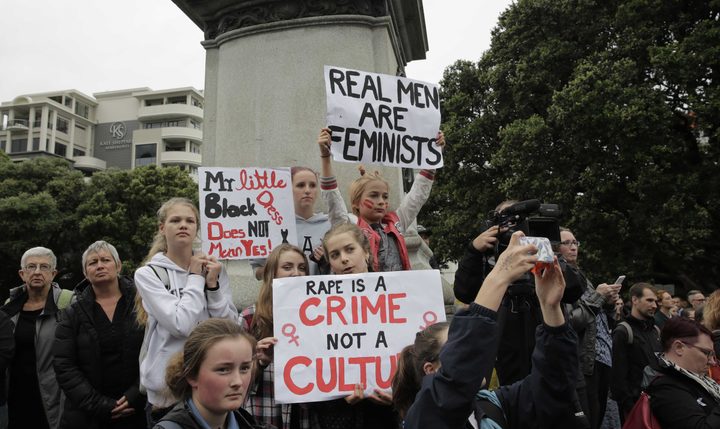 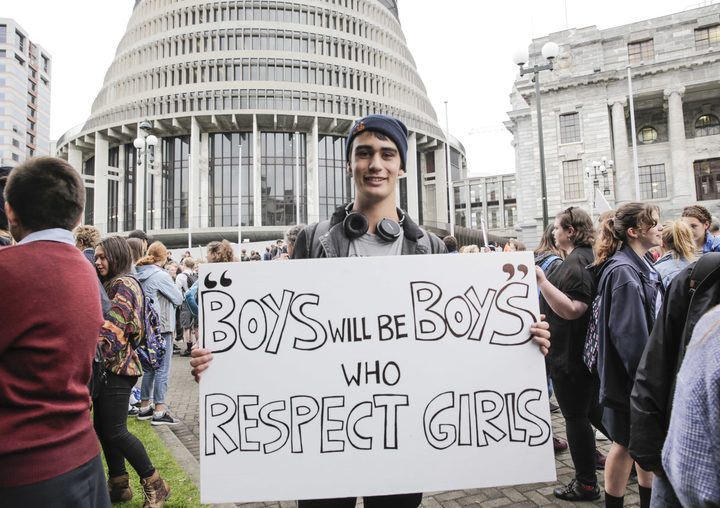 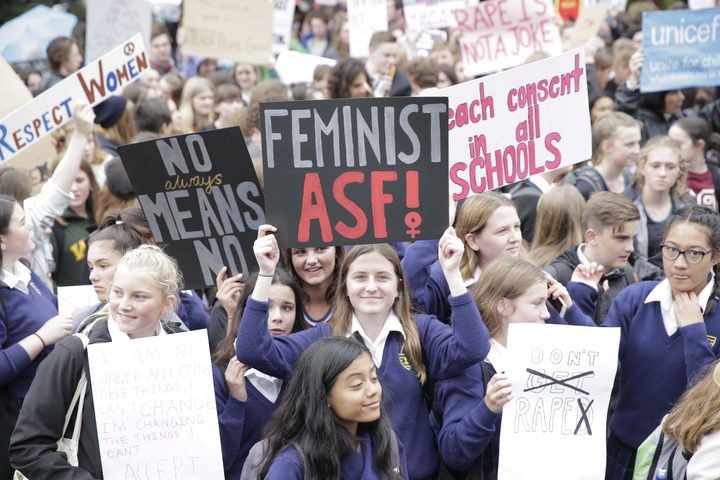 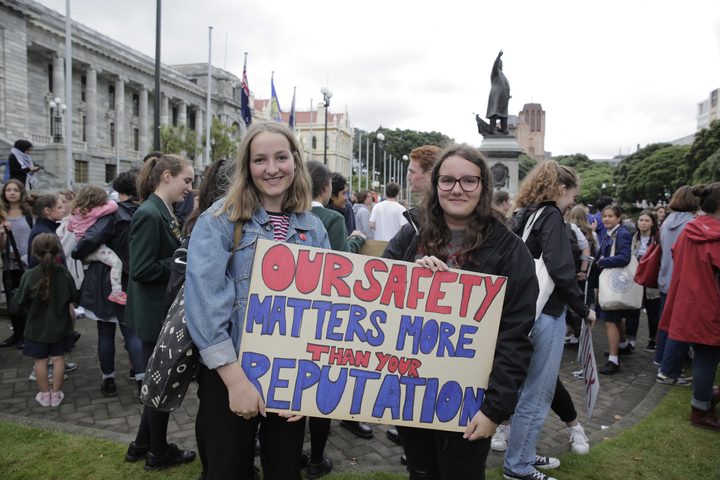 Hundreds turned out to the protest. Photo: Max Towle/The Wireless 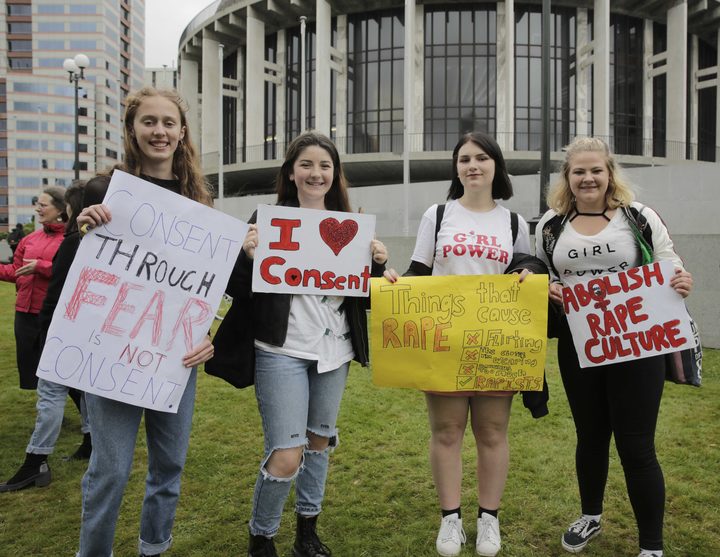 There were dozens of homemade signs in the crowd. Photo: Max Towle/The Wireless