All it took was one old man saying something stupid to start an avalanche of people saying stupid things. But which one is the stupidest? 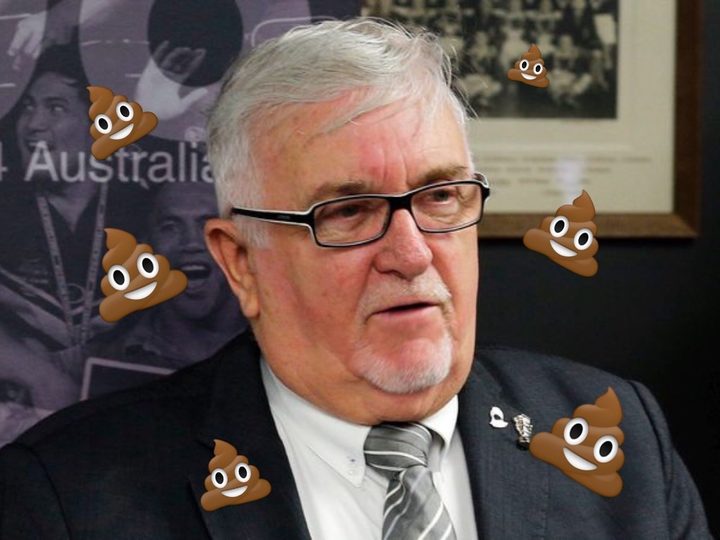 Is Sir Peter Leitch in the poo? Photo: Unknown

On Tuesday the 2nd of January, a young Māori woman posted a video on social media, telling a tale that will no doubt be familiar to most women and people of colour: During a family outing to the Stonyridge vineyard on Waiheke that day, an old white man approached her and made racist remarks, in particular that Waiheke Island was a "white man's island".

Now old white men going out of their way to make young women of colour feel like shit is nothing new. But the man Lara Bridger was describing was NO ORDINARY MAN. He was a millionaire; a mogul; a New Zealand icon, loved and admired by all.

That’s right, your old mate The Mad Butcher, AKA Sir Peter Leitch, was the culprit.

You have no doubt followed this story with confusion and neither you, nor I, can really know what went down. What has followed has not so much provided clarity as it has exposed the worrying gaps in certain people's grasp on race relations.

Which begs the question: who in the aftermath of this huge stupid mess has said the stupidest thing of all?

"This was not a serious comment and was only ever intended to be light-hearted banter. When she later informed me she was offended by my comment I apologised unreservedly. There is no way I can ever be accused of being racist. The irony is that I was with my own granddaughter, who is herself of Ngāpuhi heritage."

Leitch isn’t racist, he was just having some bants! He apologised! He’s obvs not racist! Some of his best friends are Māori! Gee who would have thought bothering non-white strangers with racially charged lad humour could ever go wrong?

Race could never have been an issue here because, hey guess what, former National Party President and master of the colour wheel Michelle Boag does not consider Bridger’s skin colour to be dark enough to be the target of racism. Appointed Leitch’s media spokesperson, Boag says she regrets making the remark to a Māori Television reporter in a conversation she believed to be off the record, however in defending herself somehow managed to make the remark again anyway.

“I said 'that was ridiculous she was barely coffee coloured.’ It's been blown out of all proportion."

Later realising that what she had said had been taken poorly, Boag helpfully clarified that she considers Bridger “a very attractive colour - and I aspire to a tan like that every year”.

“He's the least racist person I know in the world and yet what he said was obviously taken as offence by that young woman...I think it's generational and culturally different these days and he's probably licking his wounds today.”

Describing him like some old, sad, bigoted cat this morning on Radio New Zealand, NZ Race Relations commissioner Dame Susan Devoy managed to somehow simultaneously reveal how few non-racist people she knows along with her curiously low threshold for defining racism itself.

She was not done however and just hours later Devoy had MORE TO SAY.

“I know Sir Peter and while I believe he's a very good person at heart: that thing he did was offensive to Lara and it needs to be fixed up...It is pretty clear he had no idea how offensive his words were but he will definitely know this now."

THE MAD BUTCHER IS NOT RACIST HE’S JUST CONFUSED AND OLD AND REALLY NICE BUT NOT ALWAYS NICE ENOUGH AND NOW HE KNOWS HE IS GOING TO FIX ALL OF THESE THINGS VERY SOON.

“And, really, should these things even become news?  Should people take such offence even if someone’s joke falls badly flat? Is a Facebook video really a good idea? Are we now going to have Dame Susan Devoy involved at the Race Relations Office?  And what does it say about us that we’re so interested in this sort of stuff?”

Ever the philosopher, Matthew Hooton put on his thinking cap on Wednesday and penned this charming and thoughtful op-ed for NewstalkZB. Really driving home the power of the rhetorical question, Hooton concluded on this nuanced wee note: bad jokes should be secrets and casual racism is probably not too important.

Update: Do we have a winner?