November's 7.8 magnitude earthquake has damaged much of State Highway 1, cutting small communities off from the world. Tess McClure takes a journey down the empty road. 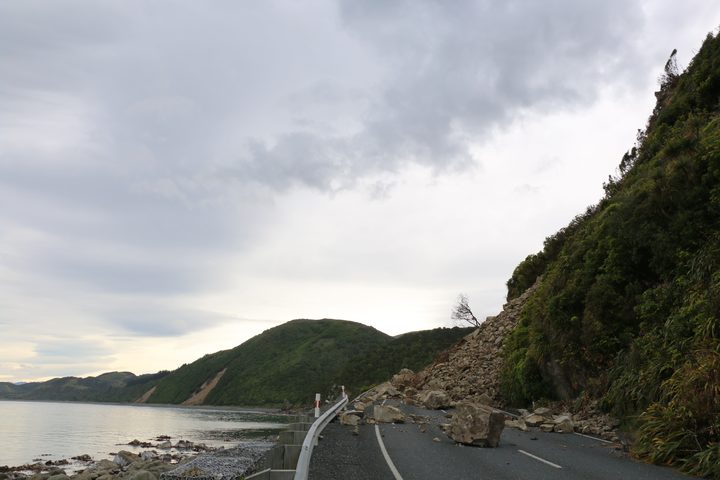 Rodney Clark is sitting on the side of State Highway 1, working his way through a pack of Port Royal tobacco.

Boulder at his back, white fishing gumboots crossed in front of him, he’s reclining in the left-hand lane of what used to be one of the South Island’s busier highways.

A little way to left, the road ends. An enormous slip has obliterated Ohau Point.

In front, the railway track has been swept down past the road and lies coiling across the beach like a recently-shed snakeskin.

And down the road to the right, if you tramp over two more slips and a few kilometres of cracked road, you’ll find Nin’s Bin: the crayfish caravan Rodney’s family has owned and operated for more than 40 years.

He’s a strange sight on this corner, one of the first humans you meet in about 10km of eerily empty highway. He’s just come to have a look, he says. Taking it all in.

"The amount of death on this coastline,” says Rodney.

“Is something fuckin' else.” 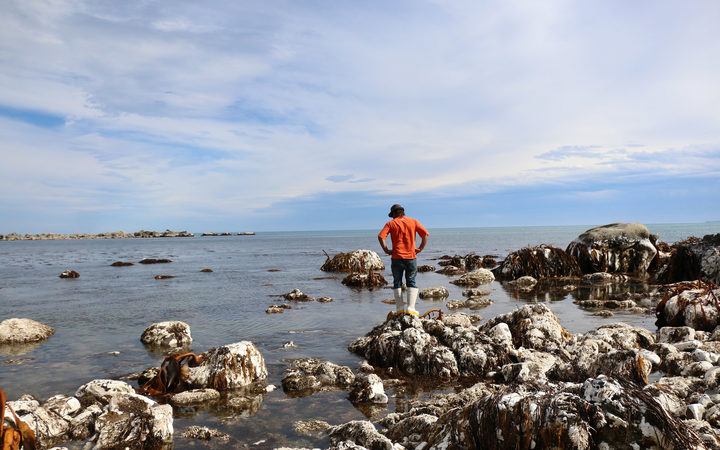 For two days after the earthquake he walked around the coast, picking up stunned crays from the newly risen rocks and throwing them back into deeper water. Paua, butterfish, octopuses, all out drying and dying - and now, stinking - in the sun.

“Oh it’s sad, sad. See that white line? That used to be the low tide mark. Sad really. The sea’s always been good to me. I’ve done alright out of it. It’s looked after me, I’ve looked after it, but it’s pretty sad when - you know. It’s hard to explain.”

He pulls out a shell from his pocket, around the size of your hand, and rests it on the gravel road.

“And limpets! No-one gives a shit about limpets. But to get to this size it’s been there 70 years.” 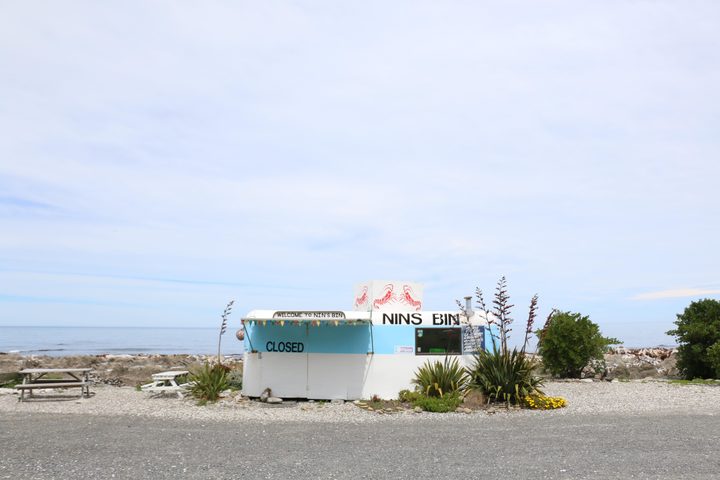 Nin's Bin crayfish caravan has been on the Kaikoura coast for more than 40 years Photo: Tess McClure

Rodney Clark’s father started Nin’s back in 1977. He used to export his quota of crays, but got sick of the fluctuating prices.

“He thought bugger it, we’ll sell them on the side of the road. And that’s basically what we did.”

“So he thought, hey I’ll give it a name, people gotta recognise which caravan’s ours. An old lady Nin Matthews worked there, and eventually it was like, 'oh yep taking a bin of crays over for Nin,' and so he goes 'oh well, Nin’s Bin.' And it stuck really.”

The light blue stripes of Nin’s Bin are a familiar sight on the state highway of the Kaikoura coast. The route carries thousands of South Islanders and tourists on their holidays and road trips up to Cook Strait and the north.

Over time, the caravan has reached a kind of semi-iconic status, appearing on tea towels and giftshop canvas prints. It’s stayed in the the family, handed from Rodney’s dad to him, and now his son. But now the caravan, and the settlement of Rakautara are cut off on both sides.

Huge slips have come down over the highway, and in parts the road itself has buckled and fallen away.  The highway is lined by boulders, some as large as cars, the kind it’s hard to climb over without thinking about their trajectory down the hill, the force they’d hit with.

Normally this would be the start of tourist season.

“I’m kinda hoping they get the road done, but it’s not looking good for quite a long time. So I’d say this year’ll be ...” he pauses. “Well. It’ll be a bit of a breather.” 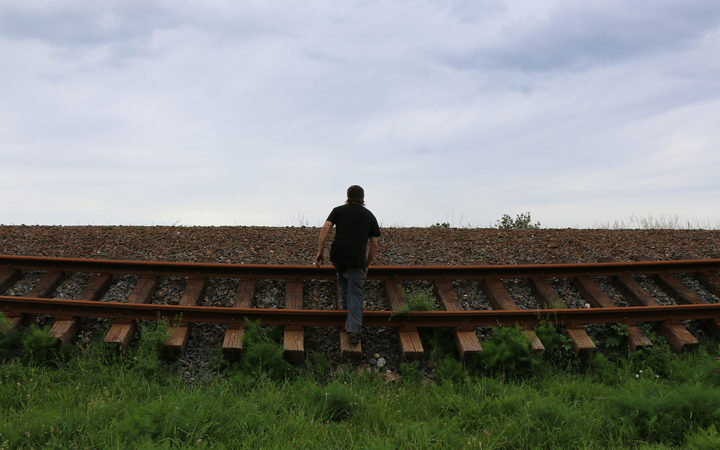 Rodney joins me on the long walk back to Rakautara. It’s a tiny community, around 15km out of Kaikoura. There are only about 10 houses, and the crayfish caravans come summer.

The Clark family home is one of the larger ones. There’s a yellow sticker on the window, and every room shows the force of the earthquake moving through it. Cracks run ceiling to floor across each wall. The stairs have caved in. The entire home has twisted on its foundations and resettled, with the hallway sinking off the kitchen.

Now it’s just him at the house, the kids gone to stay with family.

He’s been slowly cleaning it up, drinking the boxes of lemonade and ginger beer stocked up to fuel the tourist season. If you lay down an empty lemonade bottle, it’ll roll down the new slope of the living-room floor. Outside, one of the enormous concrete pillars holding up the second story has sheared off at the bottom, another has fallen. 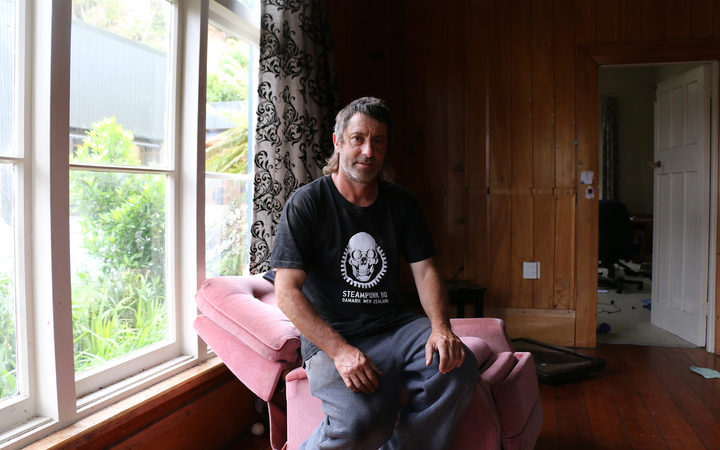 “It was violent. Very violent,” he says.

When the quake hit, Rodney jammed himself in a doorway, yelling for his kids to get out of the house and trying to stay upright.

When they were all outside, he says, they looked out at the moonlit beach and thought the tide was sucking out to form a tsunami wave. In reality, the seabed had risen two or three metres.

“So we went roaring up that hill over there,” he gestures at the bank. They went on foot, climbing over the slips, kids falling over the cracks opened up in the earth.

“We were just running, running upwards, and then a big slip went through. We could hear this big slip, and then a big gust of wind came past for a minute, from the slip. All the trees waving. It was crazy, crazy times.” 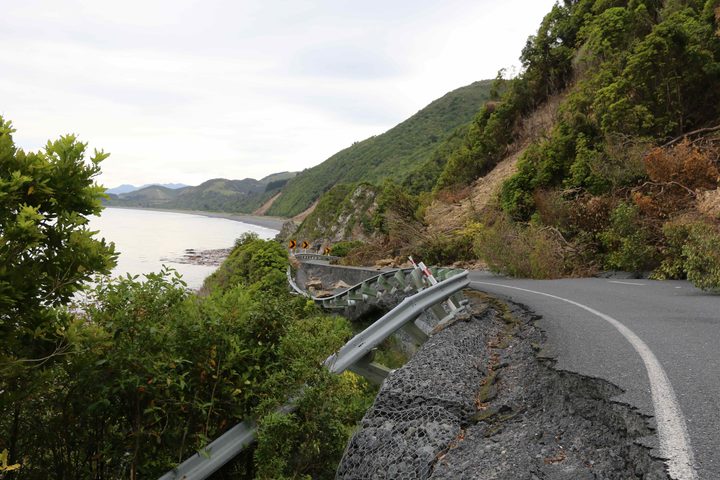 On the road back toward Kaikoura, he points out where the coastline’s changed. Rock formations they had spent decades laying craypots around have heaved up through the water and now sit exposed and white, streaked with seaweed above the tideline.

“Because the seabed’s risen, waves are breaking in different places to where they used to. It’s just learning it all again.

“It’s a bit macabre really. Seeing all the death along the coast here. All the pauas dead, the limpets, everything, all the wee critters you sorta grew up with. But hey, nature’s a good healer. It’ll heal up." 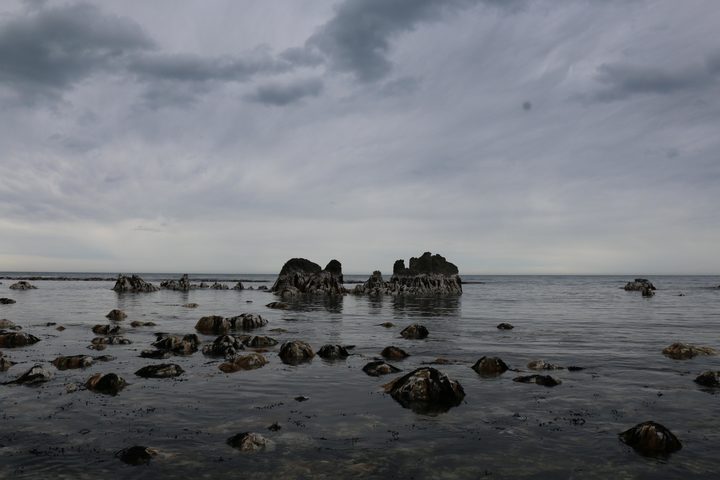 A changing coastline: rocks that used to be below sea level have risen several metres Photo: Tess McClure

On the walk back toward Kaikoura, Clark pauses at a bay known for shellfish to have a dig around.

A policeman fresh in from Blenheim appears round the corner and stops for a cautionary chat. He says officers have been patrolling since a few opportunists attempted to rob the train carriages left abandoned on the tracks, and beckons Clark up from the water.

Clark, striding from rock to rock, yells back:

“I don’t mean to be rude or anything, but can you fuck off?”

He squats in the shallows, plunges an arm into the sand.