We check their records on abortion, marriage equality, weed, prostitution and euthanasia. 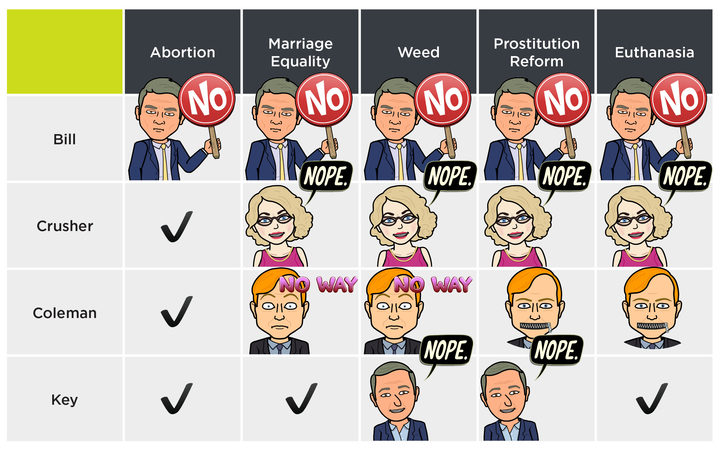 Deputy Prime Minister Bill English, Police Minister Judith Collins and Health Minister Jonathan Coleman have all put their names in the hat to become our next PM.

We trawled the internet to find out how they've voted in Parliament, or what they've said on these important issues.

Bill English is an active Catholic and a father of six. However, he maintains that his personal and political beliefs remain separate, Colin James wrote in the Herald in 2006.

English is well known for his opposition to abortion, and a number of New Zealand anti-choice websites have applauded his views.

Her name is listed on a database on website mydecision.org.nz alongside other doctors who allegedly refuse contraception, abortion, or other reproductive health care services.

In 1997, Bill English said the Crown and Parliament had “fallen short in our duty to protect the unborn child.”

During his time as Health Minister, he fought to reduce abortion rates, and championed the introduction, in 1998, of Ministry of Health pamphlet Considering an abortion? What are your options? Which contained information about abortions, alternatives to abortion, and foetal development. In 2007, he bemoaned the difficulty he faced in getting a picture of a foetus published in the booklet.

Former lawyer Judith Collins was a keen supporter of Labour in her early years, but her firm belief in personal responsibility pushed her over the fence, and she entered politics as a National party member 2002.

In 2004, she sought to change a law that allowed under 16-year-olds to have an abortion without telling their parents, but was defeated.

Jonathan Coleman entered politics in 2005, winning the Northcote seat from Labour. He was head prefect at Auckland Grammar and trained as a doctor. When asked about his opinion on abortion, and other issues, his press secretary said it was too early for Dr Coleman to “enter into discussions around policy.”

But in 2011, Dr Coleman voted against a move by Tariana Turia to replace a member of Abortion Supervisory Committee with a doctor who had chaired anti-abortion events. Bill English voted for the change, but the challenge was overruled.

English has consistently voted against anything that deviates from heterosexual marriage. In 2005, he voted for the doomed Marriage (Gender Clarification) Amendment Bill, which aimed to clarify that parties to a marriage must be one man and one woman.

In the same year, he voted against the Relationships (Statutory References) Act, which provided the same legal rights and responsibilities to married, de facto (including same-sex), and civil union relationships and was a companion to the Civil Union Act in 2004, which he also voted against. In 2013 he voted against the Marriage (Definition of Marriage) Amendment Act which allowed people to marry regardless of their sex, sexual orientation, or gender identity.

Dr Coleman questioned “whether [the Green party’s] concern is really about the medicinal applications of cannabis or more about trying to bring cannabis into the mainstream as an accepted part of New Zealand society.”

In 1995 and 2003, English voted against two Death with Dignity bills, which aimed to legalise voluntary euthanasia or physician assisted euthanasia in certain circumstances. In 2003 English said the bill set out “a process by which we can validate the taking of a life”, but “no process is good enough to be free from the pressures, the envies, and the hatreds to which any human being can be prey.” Mary English has also been vocal against medically assisted dying.

Collins also voted against the bill in 2003.

Dr Coleman has stayed mum on the subject of euthanasia.

English voted against the bill, as did Collins, who said “in my opinion, prostitution is rape accompanied by payment—if the prostitute is lucky,” during the bill’s second reading.

Dr Coleman was not in politics when the bill went through parliament.

And in case you were wondering, here are some of Prime Minister John Key’s views on the above issues.

Abortion: In 2014, Key told Family First’s Bob McCoskrie that he did not think New Zealand’s abortion laws needed liberalisation. “I think the law broadly works,” he said. “If you went to further liberalisation [of abortion laws] my concern is that people would see it as a legitimate contraceptive device in a way that all of a sudden they’d be more encouraged to go down that path and be less careful.” But he said the right to have an abortion was important for women in many situations.

Marriage equality: In 2013, he voted for the Marriage (Definition of Marriage) Amendment Act. He voted for the Relationships (Statutory References) Act, but against the Civil Union Bill in 2004.

Euthanasia: In 2003, he voted for the first reading of the Death with Dignity Bill.

Prostitution: Key voted against a third reading of the The Prostitution Reform Bill in 2003.

Clarification: An earlier bingo card, that suggested Judith Collins voted against all marriage equality bills, has been updated. Collins voted for the Marriage (Gender Clarification) Amendment Bill, the Relationships (Statutory References) Act and against civil unions. But she voted for the Marriage (Definition of Marriage) Amendment Act which allows people to marry regardless of their sex, sexual orientation, or gender identity.

Clarification 2: An earlier bingo card, that suggested John Key voted against the Death with Dignity Bill in 2003, has been replaced.