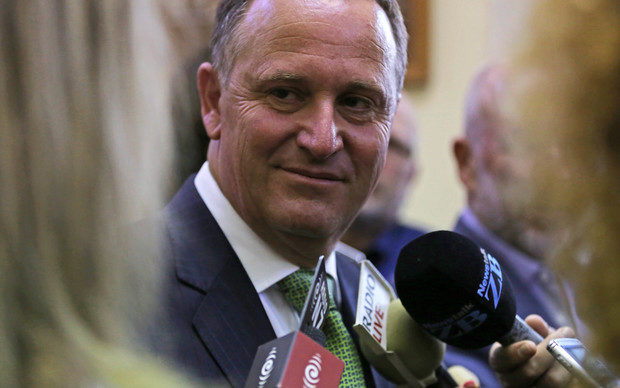 The nation’s most perennially-popular ponytail-puller has lead the National Party through three terms in government. His resignation, with the party still riding high and Labour trailing in the polls, came as something of a shock.

In the rush to break the story, a few hasty journos may have fudged the message slightly. Damn autocorrect, huh.

John Key has stood down as spam.

Labour leader Andrew Little acknowledged the resignation and thanked Key for his service, in an understated tweet translated here by comedian Guy Williams:

For others, it's been a time to reflect on the many highlights of the Key era, including his hotdog-eating prowess and famous three-way handshake:

Thanks for the memories, JK. pic.twitter.com/k7U39e4Lgm

As a number of commentators have already mused, it's a rare for politicians like Key - young enough, successful, and riding high in the polls - to leave of their own accord.

Key said in his announcement that many politicians stay too long, and he wouldn't have made it to the end of another term. He wants to spend more time travelling and with his family. But the shock of it has also left many speculating. Was he pushed? Did he get a better offer? Is there evidence of a love scandal, with, say, a certain Canadian head of state?

"I'll throw ALL OF THIS away for you" pic.twitter.com/7uPpFRAj4A

Or maybe the tide of lefty snark finally built to critical mass.

Nice work, Twitterleft. All our snarky tweets and memes and Facebook shares finally did it! Key's leaving, beaten and in disgrace.

Whatever the cause, the question on our lips now is: What's next for the leadership of both National and the country, six months out from the next election?

Key has given his endorsement to Finance Minister and Deputy PM Bill English, saying if he puts his name forward he'll get the JK vote. English has already served a brief term as National Party leader in 2002 and has held the second-in-command position since 2008. But there are a number of other party mainstays who could be putting hats - pirate-themed or otherwise - into the ring.

on reflection we should have seen this coming https://t.co/QO5PhFRiQ0

If you want to know more than a 150-character tweet collection can tell you, you can read Key's full statement here, and follow the news coverage from our friends over at RNZ.