How artists are responding to the most bizarre US presidential election in living memory. 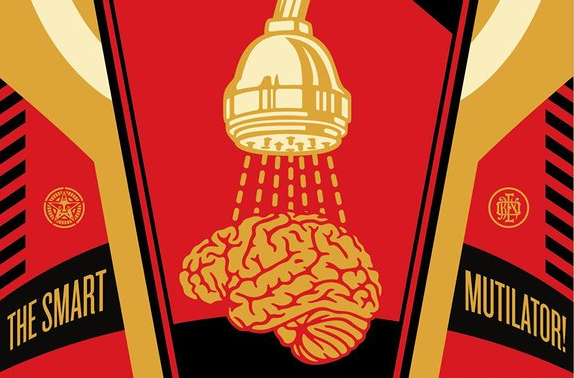 When German philosopher Friedrich Nietzsche coined the aphorism, “We have art in order not to die of the truth”, who knew the 'truth' could come in the form of the most bizarre US presidential election in living memory? Striking misogyny, blatant hate speech, frightening isolationism, and racial bigotry, have all been unfortunate characteristics of this prolonged political spectacle, to which artists have responded with their own measure of shock and concern.

One trend in the art of this year's election has been a case of trying to reinject the comedy back into the joke. The joke, in this case, being Republican candidate Donald Trump. Because despite the brash comments on building walls, banning Muslims, and blocking China, Trump's puzzling yet inexorable rise meant he soon transcended from a form of light-hearted entertainment to a real and dangerous manifestation of anti-establishment anger.

Thus, with the growing seriousness of 'Trumpism', street art — a type of common man`s canvas — naturally took the lead in conveying the backlash of anti-Trump sentiment. In 2015, just two months after Trump officially announced his run for the presidency, anonymous New York graffiti artist Hanksy unveiled a cartoonish mural attacking the candidate. Dubbed Tronald Dump or Dump Trump by its fans, the image depicts the millionaire mogul in his signature side-swept hairdo, mouth agape, while flies buzz around his emoji poop body. 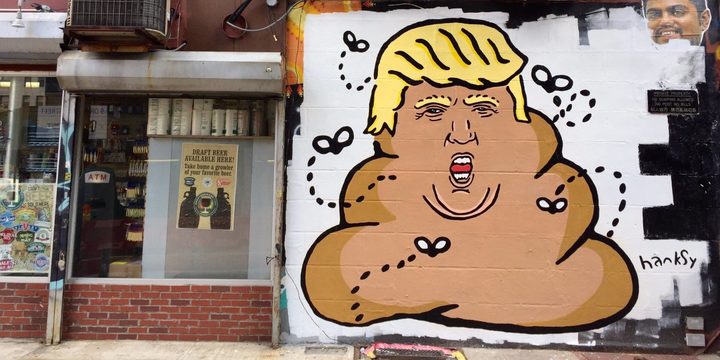 With a similar intent to humiliate, artists like Illma Gore and INDECLINE have both played on the age-old notion of the human body as creative subject. But instead of using it as a form of visual aesthetic or divine metaphor, both works depict Trump in his most shocking and revealing manner. “Some say I’ve made them see too much,” wrote Gore in response to her nude portrait of the candidate. “But I believe the human body is the ultimate work of art.” At this point, Gore was already enduring vicious retaliation for her provocative painting, receiving death threats, rape threats, and even a black eye. 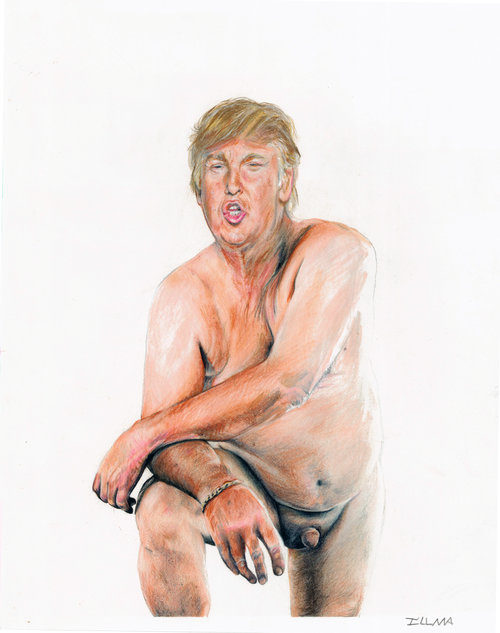 Of course, what really made emotions run high wasn't the fact that the Republican nominee lacked the necessary clothing, but that it revealed a rather diminutive 'manhood' contrary to Trump's thinly veiled comments. Gore's website states that Make America Great Again was created to “evoke a reaction from its audience, good or bad, about the significance we place on our physical selves. One should not feel emasculated by their penis size or vagina, as it does not define who you are.”

Sticking with the genital-themed message, anarchist art group INDECLINE recently installed a number of naked Trump statues titled The Emperor Has No Balls across US cities. The bulging and coarse figure of Trump, complete with veiny skin, saggy bottom, and a “constipated look”, was created not only with the intent to humiliate, but as an allusion towards the authoritarian tradition of erecting statues in one's own dictatorial and narcissistic honour. 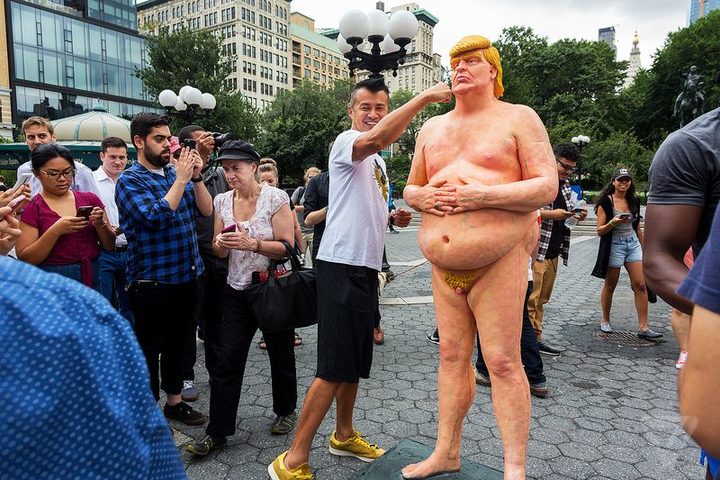 In a sign of the truly global nature of America's political situation, some of the most notable artworks of this year's election have emerged from well beyond the nation's borders. In the unlikely streets of Lithuania, a mural by Mindaugas Bonanu on the outside of a barbecue restaurant in Vilnius shows Trump locking lips with Russian president Vladimir Putin. Having both expressed their somewhat unnerving admiration for one another, the 'bromantic' mural is a play on the infamous Cold War image of Soviet leader Leonid Brezhnev embracing East German president Erich Honecker with a kiss. “We see many similarities between these two ‘heroes’ (Putin and Trump). They both have huge egos, and it’s amusing to see they are getting along well,” says the restaurant’s co-owner, Dominykas Čečkauskas. “It seems we have a new Cold War, and America may have a president who seeks friendship with Russia.” 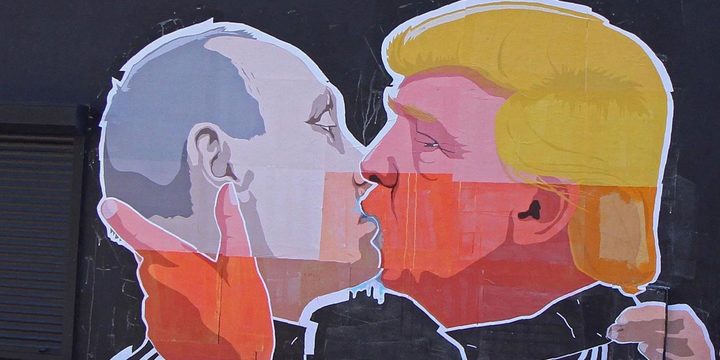 In the Melbourne suburb of Footscray, this time it was Clinton, rather than Trump, who drew the ire of locals. Although having previously painted depictions of Trump and his wife Melania, it was the scantily clad portrait of the Democratic nominee by local graffiti artist Lushsux that drew the attention of worldwide media. However, it was deemed “offensive” by the local council and the artist was promptly requested to remove the mural. But the Melbourne street artist decided to take a slightly different tack, painting over Clinton's “offensive” swimsuit body with a niqab instead. He posted a picture of the mural on his Facebook page along with the caption, “If you [consider this] offensive you are a sexist, racist, Islamophobic, xenophobic, uncultured and ignorant bigot.” (Regardless, the council remained unfazed and covered up the mural anyway.) 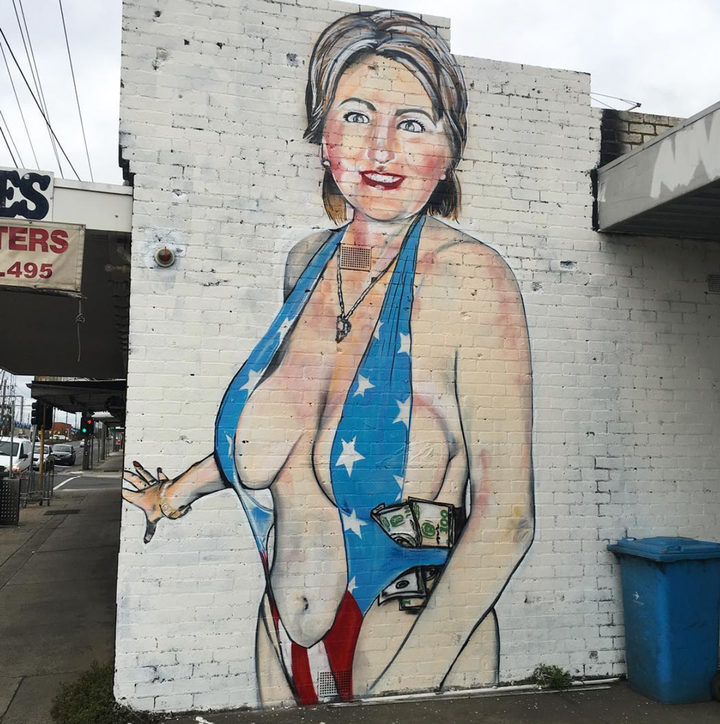 Despite the endless string of speeches, rallies, ads, and debates, it’s important to note that this election is about more than just the individuals involved. Artists like Mark Wagner, for example, used his signature technique of carefully arranging dozens of intricately carved up one dollar bills, to create portraits of politicians both past and present. With Hillary Billary and Dollar Donald, the Brooklyn-based collage artist conveys something more, delivering a timely and poignant message on the inexplicable entwinement of capitalism in America's ailing democracy. Shepard Fairey, who's work Hope became the defining image of Barack Obama's 2008 election, has taken a far more pessimistic view of politics this time with Idiocracy, a work inspired by the 2006 sci-fi comedy of the same name about a genetically dumbed down America. 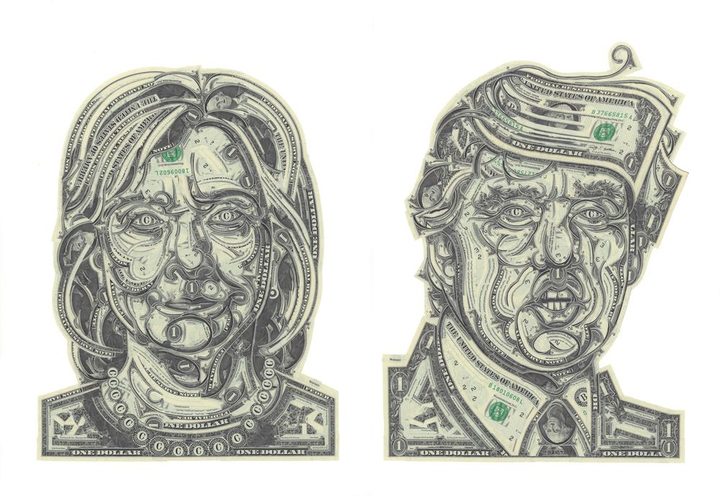 The idea of art imitating life is an age-old concept. We are, after all, a product of our environments. But many have also pondered the reverse of this adage: does life imitate art as well? In light of this year's whirlwind election, Idiocracy — which was a box office flop at the time — is suddenly being hailed as a prophetic cult classic. It's a frightening thought to consider, to which Etan Cohen, one of the film's screenwriters, tweeted, “I never expected #Idiocracy to become a documentary.” And it's safe to say that neither did we.