Are they showing solidarity or falling for an online hoax? 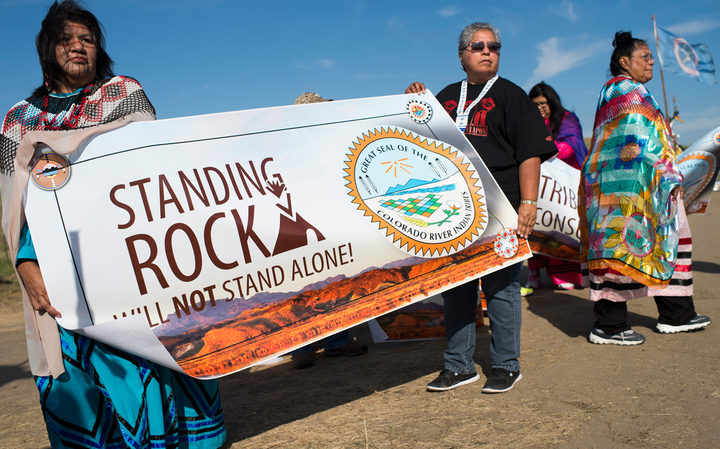 At some point last night, your Facebook feed may have been gradually inundated with friends “checking in” to a remote part of North America.

No, your friends haven’t gone on the trip of a lifetime without you. The flood of check-ins is in solidarity with protesters at the Standing Rock reservation, and usually accompanied by a status accusing local police of social media surveillance: "The Morton County Sheriff's Department has been using Facebook check-ins to find out who is at Standing Rock in order to target them in attempts to disrupt the prayer camps.”

The status goes on, “Water Protecters [sic] are calling on EVERYONE to check-in at Standing Rock, ND to overwhelm and confuse them.”

Hang on, what’s going on at Standing Rock?

The protests at Standing Rock having been going on for months, and are led by First Nations people in opposition to the Dakota Access Oil Pipeline. More than 90 Native American tribes have joined forces to protest the pipeline, which they say threatens local waterways. Since August, 260 protesters have been arrested. Last week the conflict ramped up as police surrounded protesters, deployed pepper spray and armoured vehicles and arrested 141 protesters.

Has anyone confirmed the police are actually monitoring the protesters online?

Is it true the police can use social media to track activists?

Yes - and there’s plenty of evidence it’s been done before. During Black Lives Matter protests, for example, documents obtained by The Intercept showed the Department of Homeland Security were regularly using social media to gather location data on activists.

According to documents from the American Civil Liberties Union, a number of US police agencies have acquired licences for Geofeedia, a controversial social media monitoring company that partners with law enforcement to track social media posts across locations. In November this year, Twitter suspended Geofeedia’s access to its data after it was found the company was  marketing its services to law enforcement as a tool to track Black Lives Matter activists.

It’s possible law enforcement agencies could be doing the same at Standing Rock; and the North Dakota state government’s IT department lists Geofeedia as a “social media” tool on its website. But if they are using geo-location software, it wouldn’t necessarily be disrupted by people all around the world “checking in” - those results could be excluded.

Where did the call for check-ins come from?

Again, we don’t know. Internet hoax-investigator Snopes spoke with the Sacred Stone Camp team, who said the call to action did not originate with them, but they thought it was “a great way to express solidarity”.

They said in a statement: “There is no doubt that law enforcement comb social media for incriminating material and monitor communications. There is no solid line between "organisers" and "others"- this is a movement, not an organisation. There are many camps and points of contact, we can only verify that it did not originate from the Sacred Stone Camp FB page. We support the tactic, and think it is a great way to express solidarity.”

Possibly. There’s no clear evidence yet that law enforcement is using social media to monitor activists - although that is certainly a possibility. Perhaps more importantly, even if police are using social media monitoring tools, it’s not clear that this flood of check-ins will do much to disrupt that. Then again, the protesters at Standing Rock do seem to appreciate the sentiment and the spread of the status could bring their cause to a bigger audience.

So far, the gesture seems to be sitting somewhere in the grey between solidarity movement and social media scam.