Navigating between the Pākehā and Māori worlds. 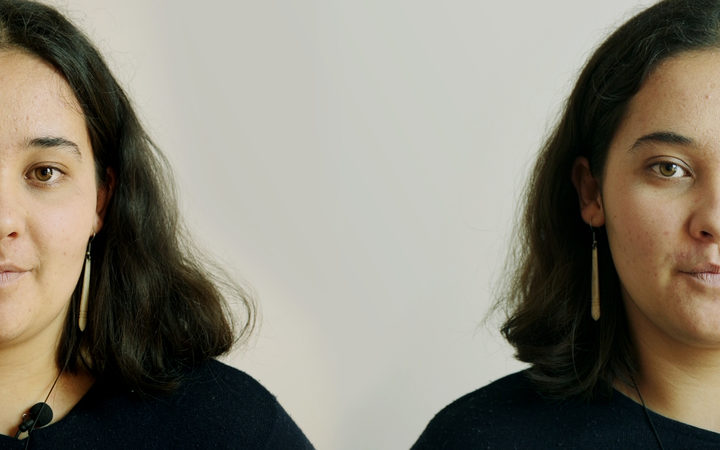 “Do you call yourself New Zealanders?” I ask two young and ātaahua wahine.

“No” and a resounding no at that.

Kahu, Tūhoe, is in her second year at Victoria University in Wellington. She writes for student magazine Salient. A few months ago she had the Facebook shares and likes rippling after her piece ‘If you’re from Waimana, why are you white?’ was published. In the passionate piece she explores the concept of walking in two worlds and what “How Māori are you?” actually means.

I myself, Ngāpuhi, and a child of a Māori mother and a Pākehā father am, among many others, an embodiment of “biculturalism”. We carry the whakapapa of this whenua and genealogy from afar. I am avoiding the term half- or quarter-caste; blood, in my eyes, should not be quantified.

Walking in two worlds is a term that - like many Māori - Kahu, Trinity and I are familiar with. I remember my Mum and aunties telling me about how my Nana and her siblings who grew up in Te Tai Tokerau (Northland) could speak the most beautiful te reo Māori and then switch to perfect “Queen’s English” in an instant. I never truly understood how amazing that was until now, that they had to know how to be in both worlds - being the Pākehā world and te ao Māori.

My Nana passed away more than 25 years ago  and now sitting in Kahu’s flat in Kelburn, not far from where my Nana brought up her children, we are overlooking Te Whanganui-a-tara just as she would have. Sitting on the floor of Kahu’s flat, kai laid out and with the sun shining so strongly the chocolate I brought with me had melted, the conversation among the three of us came so naturally. When you find others in your waka it’s a natural gravitational pull and it’s hard to stop the korero. The navigation of being Māori and Pākehā and the responsibilities that lie within that, all these years on was most definitely still on the tepu.

The concept of biculturalism has been the subject of heavy debate and contention in Aotearoa. But within its definition it’s hard to see clearly that as a country, how exactly we embrace both cultures equally. That is what the Treaty of Waitangi intended after all.

Biculturalism is something Kahu has  given a lot of thought too, her Mum being Pākehā and her dad Māori. The concept of identity deepen those whakaaro, especially going into her teenage years when the inevitable “How do I fit in in this world?” questions creep in.

The response to her article was overwhelmingly positive and she received multiple messages from people saying it resonated strongly with them, however she says there was a lot of nervousness before writing it.

“In a way it’s a bit of a taboo subject, well for me I never really felt comfortable enough even to admit to myself that there was this weird feeling that I had, before I wrote the piece I wasn’t really sure anyone felt the way I did.  I was so nervous, at the same time I was really excited to see how people perceived it.”

Kahu talks about the navigation of the “inbetween” space - which she couldn’t find growing up - and is a continual journey.

“My thing now is trying to navigate both worlds in a Māori way… and that’s one of things I am exploring at the moment, how do I explore both worlds? In this whole biculturalism thing, how can I explore a Māori world and a Pākehā world as someone who is in between?”

Stereotypes - not the good ones either - are frequently placed on Māori; the over-representation in negative social statistics seem to cloud the judgment of Māori no matter what space you find yourself in.

The weight of statistics, as Trinity puts it, sit heavily on the shoulders of our rangatahi whether they are aware of them or not. In a recent NZ Herald article, it analysed NCEA statistics, that although results were record high, the areas in which Māori were achieving were far different from that of their Pākehā peers.

When she first saw the article her heart dropped, she just imagines the mounting pressure put on tauira after an article like that comes out.

“I have got so much more work to do than everyone else and it’s just because of my skin colour or because I am Māori, that’s a burden that’s on their shoulders - the weight of statistics.”

Kahu concurs: “If you fail something as a Pākehā student, you fail just as a student. But if you fail as a Maori you are marked as a failure as a Māori.”

Trinity, a writer, poet and songwriter, said that those statistics clearly do not represent all of the amazing work rangatahi are doing and how they are embodying their identity, like herself.

Her contribution, she says includes writing her article and composing Māori music.

“I may not be the most fluent te reo speaker or the most comfortable on a marae, but I can make Māori music - and there’s always room for more of it.”

She says there aren’t many platforms for Māori to be given their voice and opening up the conversation around identity and how that can be portrayed.

Kahu comes back to the question: “How Māori  are you?”. It wasn’t until this year did she truly realise that she didn’t have to fit a certain mould to be seen as Māori. She uses the analogy of a traditional society in that you have people who have different roles, such as healers, warriors, those who work the whenua and those who hold and pass on the mātauranga.

“Just because you don’t speak Māori and you don’t do all that stuff doesn’t mean you aren’t cool inhabiting the Māoritanga the way you want to, and contributing  what you have as a skill.”

BUT BRO, YOU ARE MĀORI

Bradly Johnstone, grew up in Manurewa in South Auckland. Bradly is Ngāpuhi and Tainui and recently took part in Manawa Ora performance in Auckland. It’s an annual project from Nga Rangatahi Toa which is a creative arts initiative with mentoring programs which aim to inpsire a sense of purpose in rangatahi excluded from school.

It’s a performance-based arts project which enables rangatahi to creatively explore their own life experiences. They are paired with a mentor who include  actors, musicians, artists and writers. They have five days to prepare a piece and then perform it at theatres in central Auckland and South Auckland.

This was the first time Bradly had ever performed like this. His mentor was poet and rapper Dominic Hoey aka Tourettes.His monologue focuses on bullying and his personal experiences of getting bullied because he was “white” and rugged.

He replied: “I am Māori, but I was little, they didn’t care about Māori or Pākehā they just were like, [you’re] a white boy.”

In his monologue, he shares the reality a kid goes through being bullied. He doesn’t shy away from details, what you see is what you get. With his chosen kaupapa, he hoped that others facing the same challenges would feel they could come forward.

“I see a lot of these kids these days getting bullied, I know what it’s like to get bullied, I was getting bullied for years, from year 1 to year 10 … I thought if I talked about it, people will open up how they feel about bullying. That’s what I thought.”

He said that Manawa Ora gave him confidence and talking in front of a big crowd and telling them what he had been through. He hopes to do it again, but his plan now is to finish up his NCEA level 1 and look into doing a mechanic course. If given the opportunity, he hopes to talk about the issue of poverty.

Whether or not performing or acting is on the cards, Bradly keeps it vague, with “I have been thinking about pursuing that path.”

A thrash metal band based in Waipū, Alien Weaponry, are an example of conveying who they are through their artform. The band, in its current lineup, are two brothers, Henry (16) and Lewis de Jong (14) of Ngāti Pikiao and their mate Ethan Trembath (14). They emerged on the national music scene last year with their song ‘Ruana te whenua’ - about the battle at Pukehinahina Pā, a tribute to their great great great grandfather who fought in the battle.

This year they took out Smokefree Rockquest and Pacifica Beats, winning both competitions with their songs ‘Raupatu’ (referring to land confiscations), ‘Kaitangata’ and ‘PC bro’. The de Jong brothers went to kura kaupapa in the early years of their primary school and now compose in te reo as well as English. Since leaving kura kaupapa they say it’s been difficult to keep up the reo, but take it at high school where they live in Waipū.

The brothers were brought up listening to metal and Lewis had a guitar in his hands by age three. Contrary to their peers belief that they only listen to metal, they say they jam out to reggae and also recall listening to the likes of Bach and Vivaldi growing up.

The band was initially inspired to write in te reo by a friends’ band, Strangely Arousing, who incorporated te reo in their music when performing and winning at Pacifica Beats in 2013. The older brother, Henry, takes charge with writing the songs in te reo with help from his Dad, he said once he started it was just a natural fit with Māori being such a metaphorical language, they also draw on the power and energy of haka, which they learnt at a young age, in their music.

While talking to the band, and the de Jong’s dad, Niel, it’s clear they are steeped in stories and history not only about their own tupuna but from around Aotearoa. Henry who plays the drums, said those stories hugely influence them.

“We are singing about our tupuna and also the troubles of our people, Māori people as a whole with Raupatu...we tend to write about things we feel strongly about and that trigger certain emotions in us, I think what music does is that allows you to share that emotion.”

Lewis who plays guitar and does vocals in the band said like with a lot of music it can be a spiritual experience both performing and listening.

Asked what the response has been like to their use of reo, the band say it’s been overwhelmingly positive - especially receiving a (much appreciated) shout out from Moana Maniapoto in her Silver Scrolls speech this year.

The band have had a few negative criticisms from people Henry describes as “keyboard warriors” but say they in no way deter the band from carrying on on their path.

“There’s always the odd one, someone who probably isn’t even Māori, they were going ‘Oh, look at these white boys they have names like de Jong and Trembath, how can they possibly be Māori you can’t get more pasty white than this.’ “

“When you do look like this, people still see you differently, more than when you are more obviously Māori, it does cross your mind … If we are singing and speaking in te reo and we can culturally identify as Māori it’s like we don’t have to prove it - we just are.”

*This story is brought to you with funding support from NZ On Air.