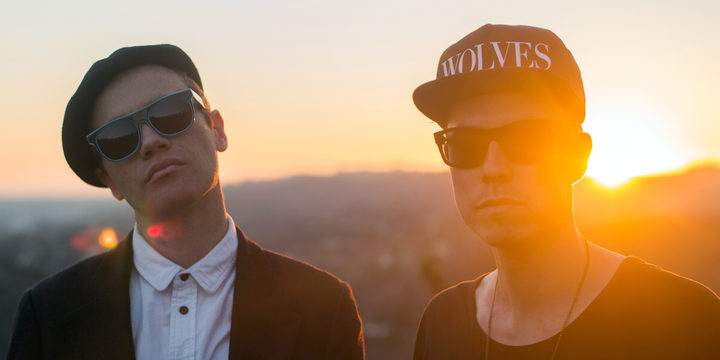 This is part of a regular series called Verse Chorus Verse which sees local artists break down the stories behind their music. For more, click here.

This song got its start in a session we did with Just Blaze at his studio in Harlem. I had all these pre-conceptions like “maybe he'll just want us to work on his own beats” and was half expecting to sign a contract (we had been made to sign an agreement just to f*cking jam with someone in New York before; as if it was common place, like offering someone a cup of tea: “english breakfast? coffee? biscuit? contract?”

Anyway, Just Blaze was unbelievably easy going and wanted to hear what we were doing and to contribute to our music. Him and Young Guru had made the most amazing midi library by playing keyboard after keyboard, drum machines and all kind of amazing shit into a vast sample bank of realness. So that's how he approached playing on this song... Well, little ol' country bumpkin Mara TK here felt like a noble savage given an audience with The King – and shown all types of new technology, wizardry and good food...

Later on and back here in New Zealand, one of the illest producers from NZ – an indie genius called James Duncan – sends me a bunch of demos to sing over for his own project. One of these songs has what I would describe as the perfect spine snapping kick and snare; meticulously recorded, microphones setup perfect, but played in a raw way that gave no fucks whatsoever: skins broke, mics fell over, drinks knocked back... anyway he was gracious enough to let me use this kick and snare sound for Go Slow, as well as his diabolically loud guitar sound which you can hear pleasantly screaming in the background.

This was supposed to be a beat for a Belgian singer called Liz Aku, which I stole for my own album. Liz had come over to make an LP with me which I was to produce. I brought in the bass player for EWH, Johnny Lawrence, who is also an amazing pianist. He plays Wurlitzer (which was eventually reversed) and a Roland SH101 which is responsible for the destructive bass on this track.

This was produced by Taay Ninh and features the wonderful harpist Natalia Mann. We threw the book at this track; there are so many elements to it: Taay's Rhodes and synth keyboards, percussion from Will Ricketts, bamboo flutes played by Adam Page. The vocal came lastly because I thought this beat was too weird for a long time, but eventually realised it was way ahead of the game...

I Light A Candle

This track is based on ideas from Aldous Huxley's book Brave New World, and is about a blue-collar girl grinding it out in the city: “She should be rated Alpha-1, but her hair is long.”

Shiet, be careful when you jump on someone else's version of a music production program like Pro Tools or Ableton Live or whatever. I had jumped on the in-house computer at Blue Barn Studio here in Wellington and had started making this song on its version of Ableton. When I went to save it, I realised that it was only a demo version and that you couldn't save – you can export but you can't come back to your work. So that was me for the whole night just finishing this song then and there, lest I lose the whole thing...

This is based on the idea of two people parting at the border to two countries. I had felt so moved by a video series on The New Yorker about a Syrian father making his way from Syria, through Lebanon, by boat to Greece, then walking for about five days North through Macedonia and finally to Switzerland.

This is based around a small phrase of a Ravel composition for harp and violin. It's partly about the burden that religion lays on the shoulders of many people. The second verse is about bucking other people's authority over your life.

I wrote this song immediately after Prince died. It's something of an ode to him, his social conscience, his bravery in terms of lyric writing, and of course his guitar playing. YAAAAAOOOOWW.

Deva's performance on this song is incredible and it absolutely floored Dave and I in the studio session. I evangelised the shit out of the demo, playing it to everyone like “You gotta check Deva destroy this song...” Taay created the beat, which has a kind of cross-genre-airpoints-world-traveller type genius to it.

This is the only track on the album which contains a sample. You'll probably be able to figure which soul song we are using here. I was experimenting with a vocoder and decided to run some classic soul tunes through it, to hear what the entire stereo track would sound like. This is the result.