Ahead of their first visit to New Zealand, performance artist Alok Vaid-Menon explains how identity is entwined in everything that they do. 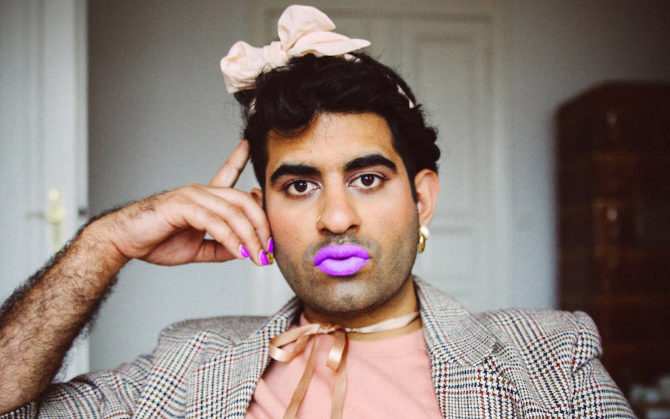 what feminine part of yourself did you have to destroy in order to survive in this world?

who hurt the people who hurt you?

My first introduction to Alok Vaid-Menon was these tweets, which I didn’t realise were poetry. But as Vaid-Menon explains to me, over a buzzy Skype connection from the US, that’s kind of the point.

The activist and artist is performing a series of solo shows in Auckland and Wellington this week. They will be unapologetically radical and feminine, and will involve Vaid-Menon’s performance poetry - but who knows what form that will take.

Vaid-Menon more commonly performs as one-half of Dark Matter with Janani Balasubramanian, a fellow artist who they met while both students at Stanford University.

They grew up in the Bible-thwacking heartland of Texas (“hell, honestly”), but is now based in New York City and organises activism there with the Audre Lorde project, a group that incorporates work on young queer people of colour, trans activism and prison reform.

While Vaid-Menon first started writing poetry in middle school, Balasubramanian only started at Stanford through the slam poetry that the pair would become well-known for in queer communities.

“It was the first time I had ever seen anyone so honest in public.

“But after a while, I realised there was an equation to the good slam - you know, you start with a joke, so the crowd likes you, and then a tragedy, and then something uplifting. I don’t know, it just started getting fake after a while… And it was such a patriarchal space, you know, all these white guys would get up and do their nice guy poems.”

While DarkMatter performs ostensibly as poets, their work is deliberately not pigeonholed so that they can pull from different influences as they like, with a middle-finger to traditional definitions of what performing poetry can be.

“I would say our work is right now a mixture of so many things - of poetry, performance art, stand-up, drag and high fashion,” Vaid-Menon says.

Even just watching some of their videos online, the two embody the power of their poetry - they’re beautiful, colourful, unashamed, and slightly confusing.

And their identity is entwined in everything they do, as a form of activism but also just as a way of being.

“Because I can’t separate myself from my art.”

For Vaid-Menon, getting up and performing their truth - in whatever way - is a form of radical activism.

“The US - of course the reality of living there as a gender non-conforming person goes completely against its PR of inclusivity. It’s actually one of the scariest places to be. There’s an intense surveillance of bodies that goes on in the US that’s entrenched in the gender binary.”

They mean when people look you up and down in the street, unsure of who you are - but also very literal surveillance in the airports and police stations of the US after 9/11.

“Did you know that the US was convinced that terrorists would enter the country by dressing as women in burqa? Literally, the thing they were most scared of was men in dresses. It’s because brown bodies are always, already violent. We’re just hiding, and any forms of civilisation - like gender - are acts we’re putting on.”

But the media is increasingly aware of and sensitive to trans people - Vaid-Menon points to Laverne Cox and the Black Lives Matter movement.

What’s lost somewhere in the new, exciting media visibility of the trans movement is anyone outside of the gender binary - anyone who doesn’t look exactly like a man or a woman, they said.

“Those of us who haven’t medically transitioned, or don’t want to, are left behind and seen as failures.”

Real trans liberation is the liberation of all genders and people, Vaid-Menon says.

“Where we need to go - is actually an old direction that we lost in colonisation. We have so much to learn from indigenous people … Around the world, indigenous people had a multitude of ways of understanding and expressing different genders.

What we need to do is resist medicalisation of our bodies. And we need to stop holding onto the assumption that trans is a minority! I believe that there is no such thing as a cis woman, because womanhood was forced onto women by patriarchy.”

This trip is Vaid-Menon’s first time in New Zealand and the excitement is in their voice.

“I’m coming with under the pretence of talking, but I am going to do so much listening, actually.

Vaid-Menon is performing at the Basement Theatre Auckland on October 7th and 8th, and at Wellington’s Meow bar on October 9th.