Stefan Sinclair, founder of Two Hands Tattoo, shares the story of the first time he put ink to another person’s skin. 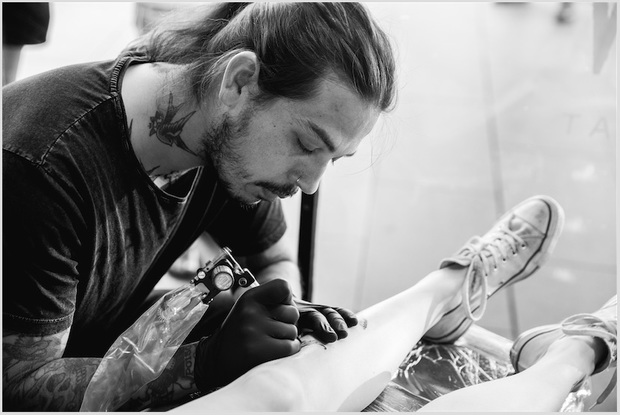 It was in my bedroom in a flat on Symonds Street, in 2001. I was extremely nervous.

I tattooed a girl called Helen, who was the friend of a friend, and she had a lot of tattoos already. And they were really bad tattoos. I mean they were awesome, but they were mostly home done. So, she was the perfect victim.

I had a tattoo machine, I had all the proper professional stuff which I’d accumulated over the years. I’d wanted to be a tattooer for what felt like a long time at that point, which was about two years.

So, I had all the equipment but I didn’t understand exactly how to use it, or how to set it up. There was a lot of trial and error.

When I was doing the tattoo, all I was thinking about was trying to do the best job that I could and just trying to learn as quickly as I could. Trying to not make a total mess of it, you know?

She knew it was the first time I was ever doing a tattoo. Everyone knew I had the equipment and that I was drawing a ton of tattoo designs, but that I hadn’t actually done any.

A lot of people were trying to get me to do them on them, and I was always like “No, I’m not ready yet. I gotta try and get an apprenticeship first and do it right.”

Then eventually I gave in to her. She was like, “Dude, look at the tattoos I’ve got. Just do whatever.”

She was into the idea of prison-looking tattoos, that was her aesthetic. She was perfect.

From a technical point of view it was fairly easy tattoo to do, but it took me most of the day to do it. She turned up at maybe midday and it was dark when we finished.

When I finished I had tunnel vision. I stood up and tried to walk around and everything that wasn’t directly in front of me was blurry.

These days, that tattoo would take me maybe 45 minutes.

I was so stoked when I finished it. That was the most awesome feeling and I still get it sometimes when I finish a tattoo.

I remember feeling that it was the beginning of something for me. It felt as though it was something that I could do and would have a future in.

After that I practiced on myself fairly extensively. I was vegan at the time so I didn’t practice on pig skin, but I did try practicing on fruit. I bought some bananas and grapefruit or whatever, but that’s not exactly practicing. It’s nothing like living, breathing, bleeding skin.

I don’t even remember my second tattoo. The first one, I remember but the 100 after that are mostly a blur. Every weekend after that I was tattooing. All these punk kids started lining up out the door.

Helen moved away from the city. I didn’t see again until about four or five months ago. She walked into Two Hands and said, “Hey, do you remember me?”

I said, “Dude, I did my first-ever tattoo on you.”

*As told to Marcus Stickley.