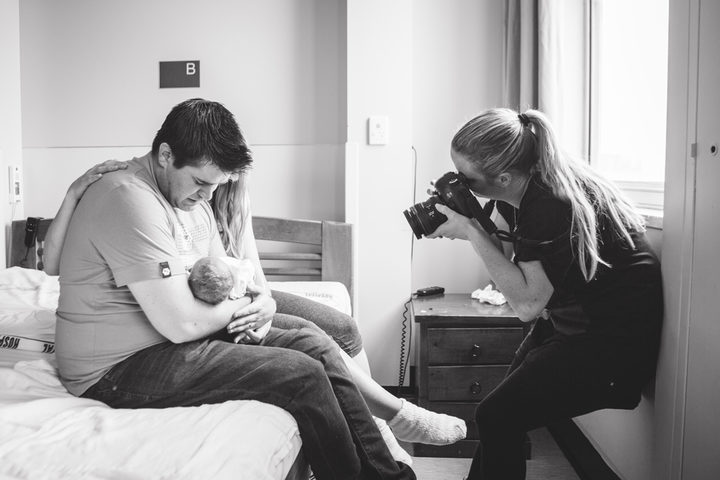 Until fairly recently, losing a baby to stillbirth, premature birth or illness was dealt with as swiftly and clinically as possible, with scant regard for the effect on grieving families.

Heartfelt, a volunteer organisation that sends photographers out to memorialise families' final moments with their child, is part of a growing movement to treat this type of loss with more care.

Hi Emma. How did you get started doing this sort of volunteer work?

I started with Heartfelt in 2014. I’d come across similar photos online from an American organisation called Now I Lay Me Down to Sleep early on in my photography career, and just sort of bookmarked it mentally as something that I'd like to do. I ummed and ahhed for a long time about whether I'd be able to do it, because I'm quite an emotional person.

It's got to be hard.

Yeah, and I was worried about that. Then I went along to an information evening and decided to give it a go anyway.

I had a lovely soft session for my first one. The baby was still alive, it was in palliative care, which does tend to make it a little easier in some ways. But harder in other ways.

What are some of the scenarios you photograph?

Personally, I've done everything from unexplained stillbirths at birth, to medical terminations where the baby had a problem that wasn’t compatible with life.

So, when the mother gives birth after intrauterine death?

Yeah. I've also photographed babies that have been in the neonatal unit for months and have reached the end of their battle, and newborns who are going for heart surgery but the outcome is unknown at that point.

Children with cancer, too – we photograph up to age sixteen. So far I’ve looked after about 30 families. In New Zealand, Heartfelt has looked after 130 families already this year. On average about two families a week. 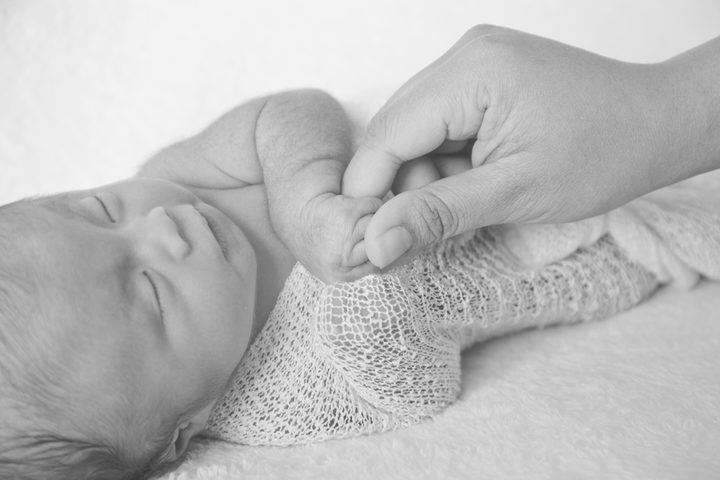 How many Heartfelt photographers are there in New Zealand?

We've got 43 currently, with a few more in the process of joining.

How much of an emotional toll does this take on you?

I guess crying, as the photographer, must just become part of it.

Yeah, it is. For me, the crying is healing. I'm not crying for myself at all – I'm sad, but it's a really humbling experience to go through. The families are inviting us into the most private, private experience. Very few people, especially outside of the medical team, are involved. It's a huge honor.

At the start, to an extent, we're task-focused. You're doing the job and you've got your camera, so you're explaining the process and what you're going to do [to the family], that sort of thing. But then when I put my camera away, my protective coat comes off and it can really affect me.

Right. You're not just the photographer anymore.

In terms of process and method, are there guidelines?

Everyone's got their own style and pattern, but what we aim for is the little details. So little wisps of hair, the little profile, hands, feet, that sort of thing. Interaction, so the parents cuddling their child, hand-holding, foot-holding.

That can be a tricky one. A lot of the time, especially with the stillborns, the family are very tactile with the babies. But sometimes they're not. Sometimes at that point they haven't cuddled it or anything. We try to encourage them, without being prescriptive. We start really gently: encouraging them to hold a foot or hand, which is a beautiful photo in itself. If the family are comfortable, we then progress to cuddling.

You must often be witness to the family's first moments with their baby, not just their last.

Yes, it's very raw. A lot of the time they're just in a haze. We try to make sure the bulk of the images are gentle and non-confrontational, so they can be shared with family, friends and extended family. Because we believe that it's so huge for the healing process.

Is there anything you try to avoid?

Personally, I don't really avoid anything. If there are little tears and things on the baby and they’re isolated to a limited area, you can shoot from the other side. But on the other hand that’s also kind of part of their story. We do retouch. It depends on the degree of what's going on.

Babies in intensive care are obviously completely wired up but you can still get some beautiful images. If equipment can be taken off that’s not lifesaving, we’ll do that, if the hospital is happy. If not, it's all part of the story. If the worst does happen, we can go back later for a shoot without all of the tubes and things, which is often the first time the parents have seen the baby without tubes, which can be beautiful. 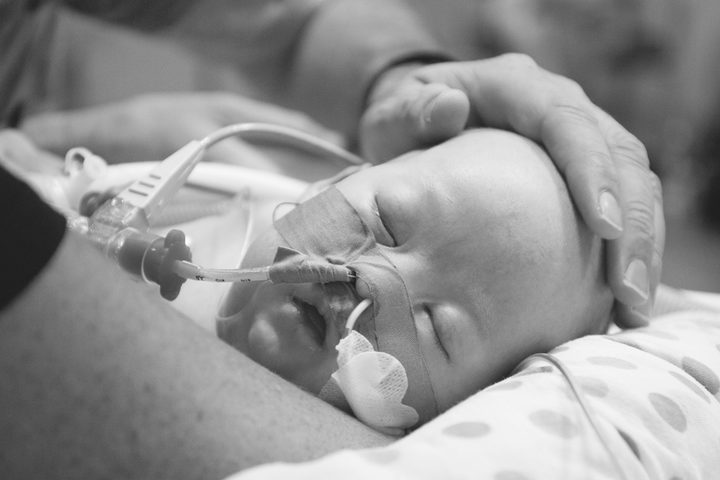 How do you feel after you’ve photographed a child? It must stay with you.

It does. It plays on my mind until I get the photos delivered, which we do as quickly as we can for the family. Some families stick with you for a little bit longer for whatever reason – like when the family has been really gentle and caring with you as well, including you in their grief.

I shed tears. Sometimes that's not in the hospital, it’s afterwards when I'm editing. Other times, it’s at the hospital along with the family. On some occasions there's been quite a big family group there, and the baby's passing, and we've had prayers. If everyone's crying, I'll cry.

Yeah, I even cry at the TV, so there's no chance of me not crying in those situations. We try to keep our grief as contained as we can, but I think it's also really nice for the family that we can grieve alongside them. I always say to the family, "Just as you're not going to forget these babies, neither are we. They're in our hearts, too."

What's the briefing process before you go in? Who gets in touch usually?

The nursing staff and midwives, essentially. They'll let us know if there are any big complications that we need to be aware of. Sometimes it's the parents. The times when it's a parent calling is often the most heartbreaking, because obviously the emotion's there right from the start.

Is there anything that's surprised you since you started doing this?

The varied reactions has probably been the most surprising thing. And the strength that these families have. I mean, I know that they've got no choice but to go through it, but it is incredible. Watching these family units come together, including extended family, that's beautiful. There's no other word for it. It really is.

Also, the sheer number [of babies that don’t make it] has been quite astounding, because obviously we don't see that in society. I guess you're aware that sometimes that happens late-stage, but now I've got to the point where a late stage pregnancy is no more safe in my mind than an early stage pregnancy. Now, I realise that pregnancy and the birth of a baby is a big process. There are a lot of things that can go wrong, unfortunately. 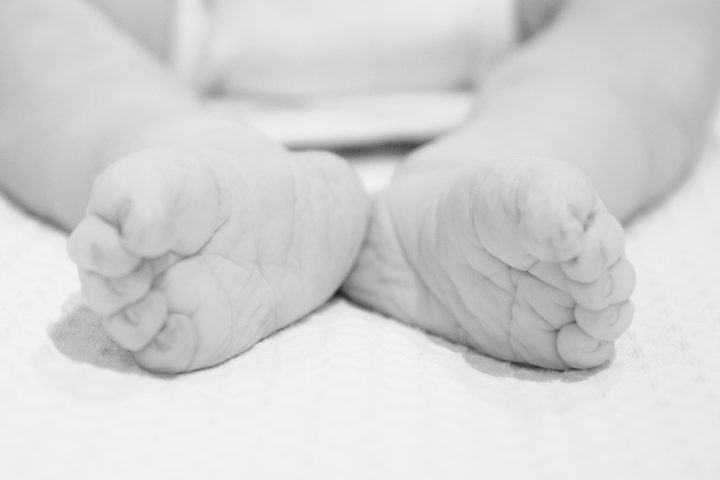 What kind of reactions do you get from the parents when they see the images?

It's incredibly touching when you hear back. I've had families ring me in tears. I've had the most beautiful text messages and emails. The families I've spoken to afterwards, they're just so grateful; they love the images. We obviously don’t ask or do it for the feedback, but when you do hear back, it reinforces a why we do what we do.

You quite often see mothers or parents posting on the Facebook page – a public domain. That is just beautiful. That's amazing. I know some of our families have had the photos blown up and put them on their walls at home next to photos of the rest of the family, so that child isn't only in their hearts.

This is all quite a shift, isn’t it, from how still births were dealt with decades ago.

The whole way it's dealt with, from the pre-care before babies arrived, to aftercare, has changed. There's a greater awareness of the impact of it on the parents. Before, when your baby was whisked away, you weren't allowed to look at it a lot of the time. I'm talking years and years ago. A stillborn baby was whisked away. Mum didn't see it.

More often than not, it was buried in the hospital grounds without the parents taking it home. They were essentially told to suck it up, go home, get on with life, and have another one.

Even beyond photography, there seems to be a move towards formally recognising and memorialising this type of loss?

Then you've got the likes of SANDS, a support group for parents and families of those affected by the infant loss. They're an incredible support group and have packs in the hospital with, for instance, our brochure and information on [hand and foot] casting, remembrance photography, and information on what to keep. They quite often have a little teddy bear and little bonnets and things, and angel gowns.

Families are really looked after now, which is beautiful. Our service is only one of many that's available. We're all a team. We're all in it for the same thing.

Thank you to the families who have given permission to share these images.

Heartfelt is a volunteer organization of professional photographers across Australia and New Zealand dedicated to giving the gift of photographic memories to families that have experienced stillbirths, premature births, or have children with serious and terminal illnesses. All services are provided free of charge.