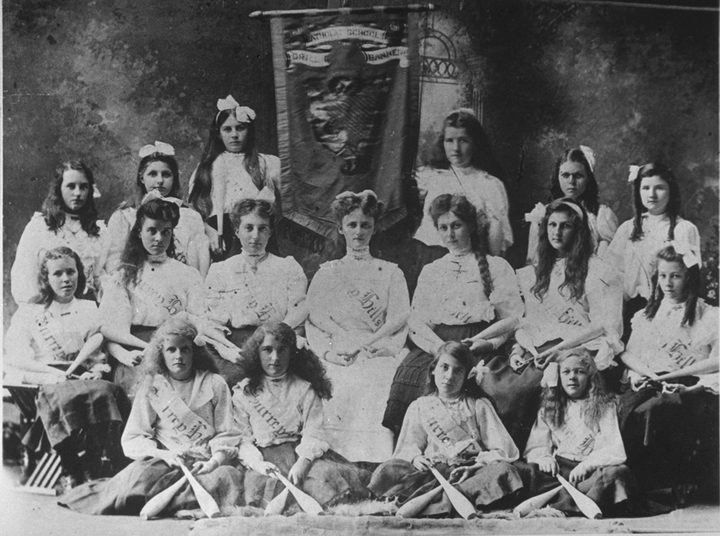 Because it wasn't always this way. As recently as the 1870s (post-muzzle era), Kiwi women had to fight tooth and nail to exit their playpens and enter the world of sport. No sooner had they looked down to discover they, too, possessed arms and legs and a fondness for using them, than an army of rattled men gathered to pop their balloon.

If women did sport, they enquired, laughing nervously to veil their abject terror, then who would do the breeding and feeding? What if, following a hard day's sport, women's bodies proceeded to go gentle into that good night? Worst of all: what if they all got the "hard face"? (More on that later.)

Women didn't answer back, because 1. They weren't allowed, and 2. They were quite certain their bodies had coped with far worse, like ejecting watermelons through the head of their pin. Instead, they proceeded to dominate the croquet lawn in blinding whites. Then they leapt into tennis, swimming, netball, rugby, cricket and cycling.

Nervy husbands began to imagine spooning hard lumps of sun-weathered muscle at night, and it made their heads spin. "Are New Zealand women fond of sports?" pondered the Auckland Star in 1924, but by then everyone knew the answer was a scary "Yes." 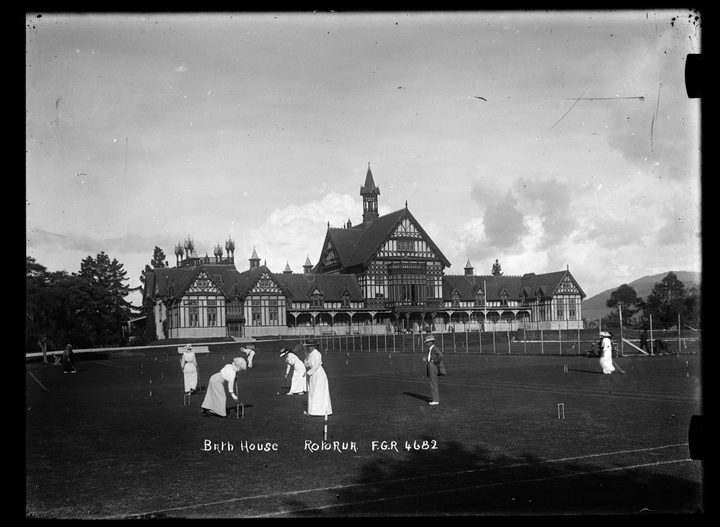 The milieu of this turbulent time can be traced through ancient New Zealand newspapers, where debate over women's "athletics" raged on for a good 50 years.

The general feeling was that women were, according to the Central Otago Gazette (1925): "Thin-skinned, unbalanced, squeamish sentimentalists, hypersensitive, almost hysterical where the infliction of even necessary pain is concerned."

In other words, ladies could barely stand up on their own two feet without support. Surely athletics would be the end of them altogether?

But some silver linings were gradually unearthed. Take the Timaru Herald in 1893, which, in an attempt to soothe the rattled nation, called on "Dr Richardson".

Women doing sport was the most radical thing to happen "in the last 20 years", said Dr Richardson, but there was no need to panic. For a start, sport calmed women's addled minds:

“There is generally less bloodlessness [dullness]," he assured readers, "less of what the old fiction writers called 'swooning'; less of lassitude [fatigue]; less of nervousness, and less of hysteria."

Exercise, continued Dr Richardson, could also make women look "better than in the olden time" — a definite plus for men.

"She has become less distorted," he said. "The curved back, the pigeon shaped chest, the disproportioned limb, the narrow feeble trunk, the small and often distorted eyeball, the myopic eye, and puny ill-shaped, external ear—all these parts are becoming of better, and more natural, contour."

There were some guidelines, though: cycling was only fine if women wore "decent clothes" and rode no more than 50 miles. And dancing was OK, but only if done "under hygienic conditions", like a small jig in the laundry. 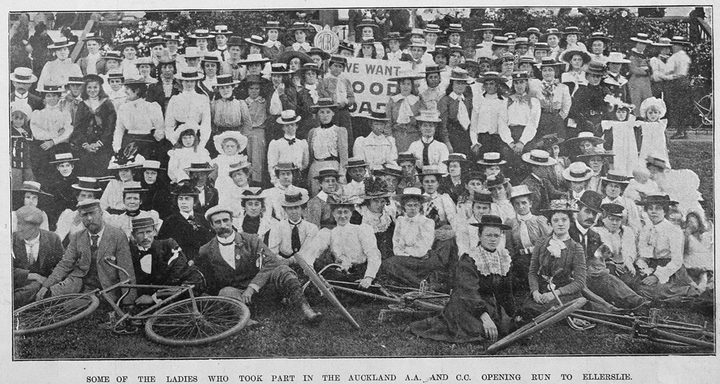 A group portrait of some of the women cyclists who took part in the opening run to Ellerslie of the Auckland Amateur Athletics and Cycle Club. 1900. Photo: Sir George Grey Special Collections, Auckland Libraries, AWNS-19001109-1-2

When women start doing as they please, it's not just men they rankle. Other women, for whatever reason, can also feel dislodged. Dot Simons, the author of weekly Evening Post column 'Women in Sport', was a sportswoman herself, and a pioneering sports writer, but she was no radical. In 1902, Dot declared that if sport did nothing else, it "really ought to teach women the virtue of silence":

“If we women attempt any sport," she wrote, "we ought not only to know how to do it, but to [also] thoroughly understand the etiquette.

"We often hear that women are a nuisance in the hunting field – they ‘ride jealous’, they love making remarks on a golf course, and even on a croquet lawn they do not always ‘play the game.’ While out shooting, to chatter is a crime which no sportsman will forgive even in the prettiest of women.”

To chatter is a crime which no sportsman will forgive even in the prettiest of women.

Then as now, to be pretty and placid was incredibly important, and the masculinising influence of sport on women was a fear that loomed larged well into the 1940s. The Auckland Star (1924) raised alarm when it got wind of women "cavorting off to golf tournaments and leaving their homes, their husbands, and their families in a state of pernicious neglect".

But they did note this was a "rarity", and added optimistically that sport might make women less, not more, bonkers:

"It seems to the writer," wrote the writer, "that open-air sport should be not only a preventive, but a cure for neurasthenia [emotional disturbance] and hysteria."

Meantime, just like today, outraged men wrote letters to the editors. They didn't care about hysteria; they'd sooner sleep beside a hysterical woman than one who kicked balls.

Some, like "E.J", had done the maths and realised it was worse than anyone had yet realised: women in sport led directly to a population decline! In a note to The Press on 7 August 1928, "EJ" barked through his mighty pen that:

“Women are not physically built to undergo the strain of sport... Nature made women to bear children, and physical strain of any sort is bad for her, and I may add brain strain also is bad for her, and this [low birthrate] is entirely the product of educating women out of their sphere, educating them to believe themselves above-the-laws of Nature.

“The worst of it is," he continued, "[is that] women never asked for this so-called emancipation of woman. Evil-minded men pushed her into it; and the sooner she lifts herself out of the mire the better for the race.

Then there was the issue of "hard face", which according to the Otago Daily Times (1930) was:

"PROBLEM FOR WOMEN. EFFECT OF SPORT."

The central issue was that women's obsession with sport had wrecked their faces. According to a beauty specialist, "hard faced women are increasing, because they take their sport too seriously. What does a typical horse trainer look like? Why, a horse."

“The sport itself would not hurt,” she offered. “But these women think of nothing else. As soon as the sportswoman gets carried away by her recreation, thinks of it alt day and dreams of it by night, her face begins to harden."

Her parting advice? "Take up sport, but treat it strictly as a sport." Never as your life, because it has already ruined that, by way of your face.

What of boxing? Were women permitted to throw a padded punch, like their American counterparts? Of course not. It was bad enough they wanted to sit ringside. On 14 April 1927, NZ Truth told it like it was. And it was like this:

"The ring is no place for a woman. Her association with this man's sport ought to terminate in a ringside chair. Now and then we hear of a female with an enlarged bump of masculinity and a notion for notoriety breaking forth with a fistic challenge to her hex."

The ins and outs of a fistic challenge to her hex is anyone's guess. Same goes for the enlarged bump of masculinity. But Kiwi boxing promotors clearly got it, because "none in his right senses had considered staging a show with a pair of feminine headliners". 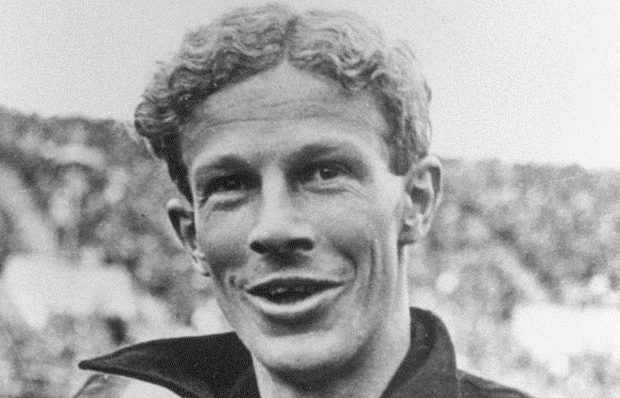 What of sporting women's male peers? Did they cheer on their maligned female counterparts? Not a chance. Not even national running icon Jack Lovelock, your grandad's hero, who won our first Olympic gold medal for athletics in 1936. And who, it turns out, was a bit of an asshole.

On 17 August 1940, as reported by The New Zealand Herald, Lovelock made his feelings known:

"I must confine myself to saying that woman's place is definitely not in the field of sport, but preferably in the home," he asserted, "and it pleases me to think that women at present are more concerned with doing their own job—and their job comprises looking after their menfolk.

"Aesthetically, women are at their worst in competition although in light training their health may benefit. Public competition among athletic women is a thing I view with abhorrence."

Jack musn't have read the Evening Post four years earlier. "Whatever concern one may express concerning the intrusion of women into men's sport," it read, "it must be conceded that some of them reach a high stage of efficiency."

It followed with the wise words of "A Counsel for the Defence of the women", who on that day in 1936 was observing a Hastings bowling tournament. "Some of the women I have seen here," she said, "would give our best men a jolly good hiding."