Shocked by the amount of plastic littering in Samoa, he hatched a plan involving a 3D printer. 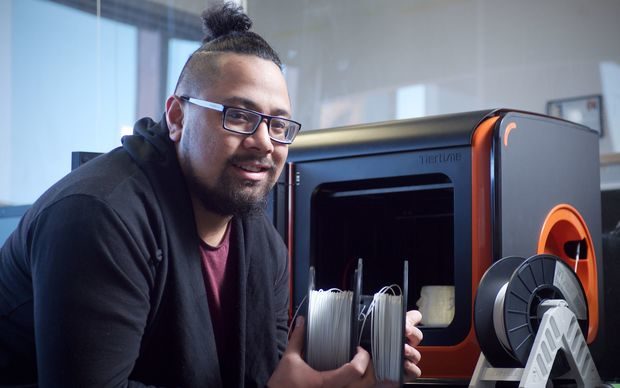 When Lionel Taito-Matamua attended his grandmother's funeral in Samoa he was shocked to see the sheer volume of plastic waste in the country.

He discovered there were no systems in Samoa to recycle plastic, “so most of the time it just ends up in the landfill, in many of their landfills, or else it’s buried, burnt, it ends up in oceans, rivers and lakes or on the side of the road”.

That trip in 2010 inspired the Victoria University design innovation student to devote his Master's thesis to finding a way to help Samoa make use of its waste plastic, by turning it into something useful and helping the environment, a project he’s been working on ever since.

How did this idea come about?

It initially started off in 2010 when I went over to Samoa and went over to my grandmother's funeral and saw how much waste there was in terms of plastics cups, plastic plates, forks, plastic bottles along the side of the road ... Seeing all of that and then going throughout my degree and then into post grad and picking up all these new skills [I’m] trying to utilise these new skills that I’m picking up to address these issues. It’s not only an issue in Samoa and the Pacific it’s a global issue in terms of waste management and plastic waste.

Is there recycling in Samoa?

Most of the time it just ends up in the landfill, in many of their landfills, or else it’s buried, burnt, it ends up in oceans, rivers and lakes or on the side of the road.

So what is your concept?

It’s the whole idea of using all of this waste material including plastic, organising it all, and then turning that into 3D printable material, which is what we call filament and using 3D printers and those materials in our communities in the Pacific to make other things, useful items, stuff they can actually export this time.

Now we’re trying to transform that non-exportable plastic as raw material, into something that’s exportable in terms of a product, souvenirs and stuff that could be sent away overseas.

When you came up with this idea did you realise what a huge part it would play in the rest of your life?

No way I would have thought it would have escalated the way it’s gone, which has been awesome.

It’s the whole idea of pushing past your boundaries in terms of what you think you can do to what you can really do, which is something that I’ve found out myself. I thought I could only get up to a Bachelor's [degree at university] and two years later there I was submitting a thesis.

That’s stuff that I never thought I could actually do because I’m not the best writer, I’m not the best designer, but it’s just the idea of putting your mind to it and pushing past your boundaries because the only person who you’ve got to beat in life is yourself.

Do you think there should be more support for young people with ideas?

I was lucky enough to actually be able to do a thesis and stuff and actually get the idea out on paper and then get all this support from different people.

But we’ve got a lot of Pacific and Māori communities that don’t get the educational opportunities that a lot of us do have and they end up moving away from education, but they still have that drive and also the ideas to have all these businesses or ideas that could make a big difference you know. Having more in terms of support would be awesome.

*Lionel Taito-Matamua is speaking at Festival For The Future, which is being held in Auckland from Sept 23-25.