Every two years, the Gloriavale Christian Community welcomes 6000 people to watch a four-hour concert extravaganza. Last week Katie Scotcher and three friends went there to check out the show, Candlelight Castle, in the community’s own dining hall. 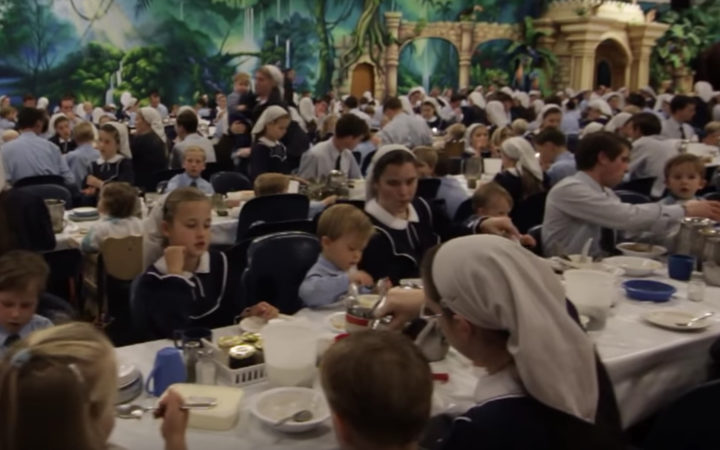 We left Greymouth at nine, after a night of wine and leopard print. There was a mix of emotions in the car: our Gloriavale expert, Anastasia, was naturally ecstatic and the rest of us were feeling nervous as we made our way further inland.

During the drive, we discussed their way of life and the sacrifices they had made to join. We joked around saying that if we were men we would love to be part of the community! As a leader of Gloriavale, (all leaders are men) you have full control over marriage by creating shortlists of women men can choose to wed, you oversee the controversial $41.2 million charitable trust fund and monitor the limiting education system.

We also weren’t strangers to the dark past of several Gloriavale members, including their leader Hopeful Christian (Neville Cooper), who was jailed in 1995 for three charges of indecent assault. Their biblical practices, which have been deemed as manipulative, controlling and totally brainwashing was also something we were very aware of when journeying to the community.

After an hour of driving, a number of bright yellow, hand-painted signs led us to a narrow road that ended at their driveway. The lightly graveled road was surrounded by perfectly preserved paddocks and as we drove closer, small people dressed head-to-toe in blue appeared.

We were led to a car park, at this point, there were only two other cars. We had no idea what to expect, maybe a dingy hall? The children from Gloriavale singing hymns? Potentially a few Greymouth locals watching just for the purpose of tradition.

One of the shepherds welcomed us into the dining hall foyer, we then stood there awkwardly as he made conversation with the people from the other cars. We went to the bathroom in the hopes of finding something really exciting on the way but were caught taking selfies in the mirror instead.

Moments later we were invited to enter the dining hall. As we walked in, we were transported to Disneyland. Enormous hand-painted wooden books, moving dinosaurs and owls, a castle (complete with a moat!) and remote controlled candles in every direction appeared. As I said before, we didn’t know what to expect – but this wasn’t it.

We sat in our chairs, which were packed together and decorated with personalised name tags, hand-crafted boxes of cheezels, an overwhelming number of utensils and another remote controlled candle.

Soon enough seats began to fill; before we knew it, there were over a hundred people in the hall, unaware of what the next four hours would bring.

From nowhere, the people of Gloriavale were filing out soup in an organised army manner. Our first course, some sort of tomato/veggie soup was accompanied by homemade bread and butter. While we ate, their orchestra performed a number of songs.  It seemed like everyone knew how to play the violin, at least!

Each row of seats was assigned a married couple (I think) to serve them food, we were served by Faithful and Gloria, who never stopped smiling. They presented us with two homemade drinks as we watched the orchestra, a sparkling apple juice and a non-alcoholic homebrew called Horehound. Both were surprisingly good!

Before we knew it the next course was already being served; rice, chicken (I thought it was pork) peas, mushrooms, tomatoes, gravy and a strange bacon/cheese/capsicum sauce?? While we ate, their Hopeful Christian preached about creationism, how the media is evil and stressed the importance of the elderly. Listening to him preach about the media was quite shocking. We all knew the reason he felt so strongly about it was because of the negative publicity Gloriavale and Hopeful Christian have received. You can imagine how awkward we felt – especially being sat two seats away from Hopeful.

The show quickly began after the preach. There were nine acts in the show, including The Legend of the Dragon and The Prince and The Pauper. It began with a spoof of Tangled - a blonde girl sang about stories as four younger children in lizard costumes paraded around the room.

Then shit got real. In the next scene, Childhood Memories, kids were flying across the stage in harnesses, there were cowboys, astronauts, princesses and too many animal costumes. This was all happening while they sang and danced. We were told that if a man and a woman were dancing together they were married.

My favourite scene was the Apple Jack Medley, because I was sure it couldn’t get any stranger afterwards (it did). It began with some of the older men singing while playing the banjo and harmonica. As they sang, massive moving trucks, steam trains and cars, all being driven by young children, appeared on stage. The vehicles were full of individually hand painted apples that took 3 months to prepare.

Despite being unable to move from the previous two courses, dessert was served during the performance. Potentially, New Zealand’s best ice cream sundae - soft serve (!!!), mousse and cherries soaked in spices.

As we sat there, we would suddenly realise we were eating ice cream sundaes, watching people from Gloriavale fly across the stage in harnesses in the middle of nowhere. Very, very, strange.

The show continued for another three hours. Videos were projected on massive books of them fighting dragons (dinosaurs) and being burnt at the stake, a real horse made an appearance, girls skated onto the stage and performed in Heelys, they made digs at politicians, discussed opening Windows on Apple computers, there were multiple acapella. Eventually, there were shows that reminded us of Glee, they sang Ronan Keating and our seats were moved by hydraulics as water was sprayed on our face.

There hadn’t been too many obvious religious themes by the end of the show, a few songs about God and the joys of prayer but nothing too confronting – until the finale. It began with God resurrecting a girl, they then sang about Heaven and danced on more Heelys. Eventually, everyone was back on stage dressed as an angel as they went to heaven.

Shortly after, Hopeful made his way back on stage to officially close the show. He warned that if we didn’t drive carefully and crashed that the media would blame Gloriavale for having the concert in the first place. Eeeek.

We met Loving and her husband in the foyer afterwards and they showed us around the rest of the hall. The kitchen, was working like a well-oiled machine.  As we walked past some of the younger children they would avoid eye contact or shuffle behind their parents to avoid us entirely.

Speaking to Loving and her husband was really fascinating, apparently, the build-up to the show was very stressful as they had to balance farm work and family time on top of rehearsals. It was surprising how open they were with us about the stress. They have five children and Loving told us which parts they played and was obviously very proud.

On our way out of the hall we were given a loaf of bread, DVDs and booklets about the community.

*Read more from Katie Scotcher on her blog.