One-click petitions, let’s-send-this-viral videos, endless profile changes: French flag for Charlie , rainbow for marriage equality, black for privacy. They’re a reliable feature of every newsfeed; but does online activism actually do any good? 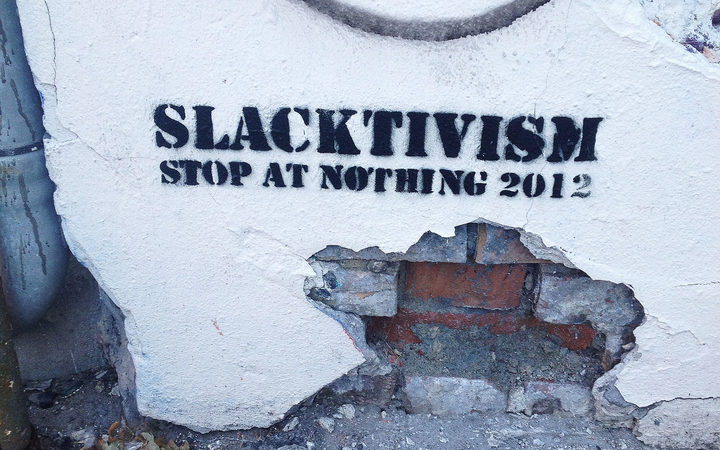 Social media has become the outlet for so much of our lives, so it’s natural activism would find a forum there too. But champions of social causes who take their fight online are still viewed with a certain degree of eye-rolling and derision. It’s not that they won’t lift a finger to help the cause, it’s just that it tends to be only the index finger - hitting the like button, clicking share, or sending a retweet into the ether.

But new research has found the much-derided “slacktivists” of the online world are an essential component for protest movements to reach a tipping point over to mass movement status.

The paper, entitled “The Critical Periphery in the Growth of Social Protests“, was published in Plos One journal, and analysed millions of tweets and social media messages surrounding the sit-in protests in Istanbul, the Occupy movement in the United States and the international United for Global Change demonstrations.

Researchers examined when and why the number of participants in a social movement “reaches a tipping point—the moment when the spark becomes a wildfire,” and it spreads through the general population.

To track the influence and spread of information, they mapped out tweets surrounding the subject, identifying a highly-connected activist “core” who created a lot of information and connected closely to one another. At the other end of the spectrum where those sharing a few articles or slogans here and there but who weren’t directly hooked into the movement.

Classed as “peripheral participants”, this group made up “the immense majority of users who surround the small epicenter of protests, representing layers of diminishing online activity around the committed minority”.

The researchers noted that “such users are often derided as ‘slacktivists’ because of the shallow commitment involved in clicking a forwarding button”.

But far from being meaningless, they found “consistent evidence that peripheral participants are critical in increasing the reach of protest messages” - and that they had an influence online at similar levels to the core participants. In other words, you don’t have to be at the centre of a movement to have a significant effect on its spread.

The researchers wrote that while a committed core still constitutes the heart of protest movements, “our results suggest that their success in maximising the number of online citizens exposed to protest messages depends, at least in part, on activating the critical periphery.

Peripheral users are less active on a per capita basis, but their power lies in their numbers: their aggregate contribution to the spread of protest messages is comparable in magnitude to that of core participants.”

So click, sign, tweet and share away - it does make a difference, if a small one. But it’s worth noting while the periphery can tip the balance in favour of a social movement, it still needs a committed central sphere to orbit around. While those of us sharing the message can help it spread, mere clicks won’t start a revolution.