Doprah give us a track-by-track rundown of their new album, Wasting. 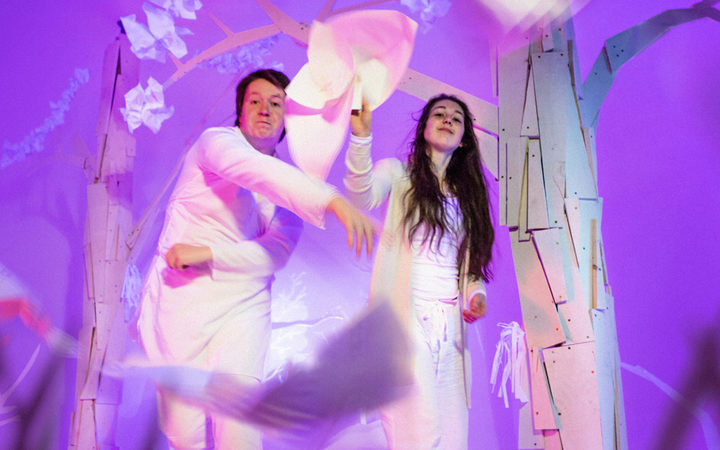 Verse Chorus Verse sees local artists break down the stories behind their music. For the latest in the series, we asked Christchurch act Doprah to explain the songwriting process behind each of the songs on their just-released album, Wasting.

'Figure 8' was the first song we wrote as a band. I remember jamming it one time during a sound check at the Darkroom back when we called it “the jam”. The song wasn’t fully fleshed out until we hit The Sitting Room. It took me way too many hours and takes on the drums but we eventually got there. I tucked into a bottle of Grants for a bit of a confidence boost, overdid it, and had to get a lift home with Matt in his car trunk. - Ryan Chin

'Subaeruginosa' started when Indi was mucking around with a bass line one night and asked me to put some placeholder drums behind it. That phasey loop is actually 'Whatever You Want' SPD drums running through a Fabfilter preset. It sounded great straight away so we kept it and the song came together very quickly after that (as good ones tend to). I've no idea what Indi's singing through all that auto-tune but the whole thing feels fittingly shroomy. Steven did his thing on it with repeated instructions for “more drums” at the end from Indi. I like the guitar sound in the bridge which he describes as “deliberately shitty.” - Matt Gunn

I had started writing 'Borderline' before I’d met Indi and didn’t finish it until after she had moved in with Matt and me. It took so long to be satisfied with the music for the verse. I went through about five different versions before I had something I was happy with. We ended up adding live drums to it way later at The Sitting Room, which really brings the track to life. - Steven John Marr

'San Pedro' was one of the first Doprah songs I wrote. I'd become friends with a lot of people who were producing their own music and it was like 'I can do this too'. Around the same time, I’d had a really heavy experience, making me want to write 'beautiful' music. I like to think of the main guitar line as a panic attack. It’s all calm and floaty, and then this sinister presence comes down over you. For anyone who's wondering, yes it is about the feeling of me freaking on San Pedro. - Steven John Marr

'Wool' was written more recently. The lyrics are about growing older and noticing all of these awful realities that have come into existence, only to discover that it has always been like that. It’s like realising that the feeling of safety and comfort your parents gave you as a young child was just a false security. - Steven John Marr

'Lucid Visions' is one of my favourites. I released a demo of it ages ago, called 'Together Apart'. The album version is faster and more lavish on the production side of things. It was the first track we recorded at The Sitting Room. We definitely could have used our time better. It was so hard to get right, but our level of alcohol consumption and general jokey behaviour factored into that. Our next session out there ran A LOT smoother. - Steven John Marr

I always felt weird about 'Stranger People'. It never would have been finished had Indi not spoken up about liking it. I thought it was too “pop”. I played it to her the first time we met in person. She wrote vocals for the verse and the extra chorus hook. It all just came together so easily. My chorus lyrics are about feeling regret towards loved ones. - Steven John Marr

'Omni' is my favourite song to play as it’s the most guitar heavy track. I played the verse riff at a rehearsal and Indi decided she was into it. I sent the riff to her and Steve to work on and was stoked when they showed me what they’d done with it. Steve’s lyrics are taken from an old Ipswich song I think and I have no idea what Indi is singing about. I never know. We felt out the end noise jam in the studio. It’s a lot of fun to play live; I get to make some rude noises. - Hunter Jackson

'Black Lodge', I don’t know what to say.

I like to play bass. More than anything I love playing live shows with this wonderful team of musicians and keeping Ryan from sleeping at night when on tour. - Symon Palmer

I am always making ambient pieces on the side and sometimes I'll get really hooked on one sound. For 'Wormhole' I was basically just playing around and enjoying the bubbling sounds my synth was making - I'd been wanting to use that sort of pulsing-sound setting in a song for ages too. The idea of a small, non-vocal interlude track appealed to me and originally acted as a doorway into the darker segment of the album. We had also just watched the '90s sci-fi movie Contact and I loved the idea of these strange cosmic holes through which time and space is warped and it leads to some unknown dimension - hence the name ‘Wormhole'. - Indi Force