Getting by on a student budget is hard enough without being paid less than minimum wage. 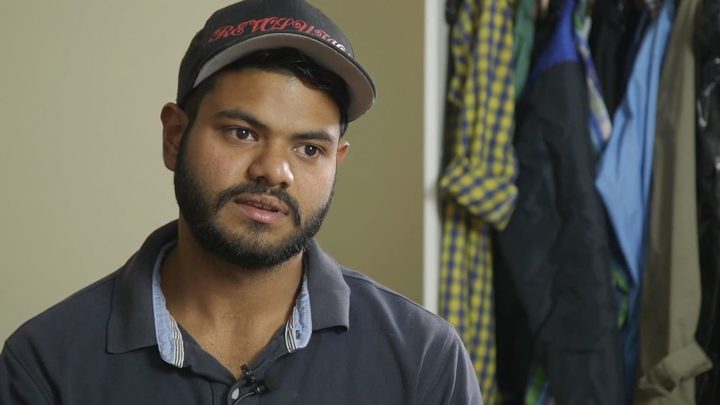 Working long hours for less than minimum wage, Mandeep Singh says he and others working at an orchard threatened to quit.

“I worked three months there and I was quite happy earning good money, paying back [loans] and paying my fees, but after that I left that job because I had to prepare for my exams,” he says.

But with no signed contract or agreed wage, the 22-year-old from the Indian state of Punjab says his pay was cut from $16.70 to $9 an hour when he went back to the job after his exams.

“I said ‘why?’ and they said ‘there is now a contracting company in between of us’. They did not even tell me before.”

On top of having to work for less than minimum wage, he says his shifts were often 12 hours long.

Mandeep is one of thousands who come to New Zealand each year on student visas. Education New Zealand figures show last year 104,000 international students enrolled to study here, the highest number since 2003.

“OK, go back. We have other guys in a queue,” Mandeep says he and the other workers were told by their boss.

“If we don’t do it, there are lots of other guys who want to do it for even less money. That’s how they torture us.”

He needed the income to pay back his $20,000 debt in India and cover rent and living expenses in New Zealand.

“There was no other way for me. I have to pay my rent. Not just me, all of us have to.”

The Government is trying to crack down on migrant worker exploitation. Last July, the Labour Inspectorate received an additional $32 million to investigate possible cases.

Migrant Workers Association spokesperson Anu Kaloti says the abuse of young migrant workers is more widespread than people think, though many choose not to take action because they fear losing their jobs, being kicked out of the country, or ruining job opportunities for themselves and other international students.

“There are a vast number who are so scared that they do not want to take it any further for the fear of losing what little they have. They’re scared to speak out so a lot of cases just die down.”

Mandeep didn’t want to report the exploitation he suffered at the orchard because he feared that he and his co-workers would lose their jobs - and if he went to the authorities now he says he has no proof because he didn’t have a contract.

He now works as an electrical service technician in Auckland and in his spare time, he makes videos to help young Indians thinking of moving here.

Kaloti says for Indian students, the exploitation often starts back in India.

“A lot of them are being exploited even before they set foot on New Zealand soil, because they’re coming through agents who take their cut even before these guys even start going to their classes.”

Some institutions in New Zealand will only take applicants who have come through agents and this needs to stop, says Kaloti.

“They paint a very rosy picture: you can work 20 hours a week, you can get a job that pays you $15-20 an hour, and you’ll get your job really easily - but it’s the complete opposite when they get here.”

Last year, Indian student enrolments increased by 50 per cent to 23,400, making them the second largest group of international students in the country behind those from China.

And like Mandeep, many Indian students come to New Zealand from Punjab.

“They’re taking out loans to pay their fees here or their parents are having to sell their agricultural land, or pawn it, to generate the funds,” Kaloti says.

Once the students get here, they quickly realise the reality of work and study is totally different story to what agents have told them back in India, but many are stuck.

“We all know there aren’t that many jobs to go around, even for people who have been living here for years and years and have amounts of experience. Somebody who has just newly arrived, it’s even more difficult for them so they’ll take whatever comes their way.”

Kaloti says as well as cutting out agents who are giving students misleading information, there needs to be protection for whistleblowers in New Zealand.

Labour Inspectorate General Manager George Mason says he recognises that migrants are often reluctant to come forward to report exploitative practices and in response, Immigration New Zealand has developed a policy to encourage them to speak out.

“The policy means that in cases of serious workplace exploitation, migrants who come forward will be allowed to remain in New Zealand while they apply for a new visa,” he says.

International students exploitation is a major focus for the labour inspector who are currently undertaking proactive audits.

“International students work in industries that are more likely to have relatively high rates of non-compliance including retail, hospitality and horticulture.”

Cases of workplace exploitation have been gaining attention in New Zealand. Last October, two managers of the Indian restaurant chain Masala were sentenced to home detention for exploiting staff at restaurants across Auckland.

Earlier this month, an Indian man was awarded $25,000 by the Employment Relations Authority after it was found he was exploited for more than a year while working at a Four Square supermarket in Napier.

Hardeep Singh, 24, also experienced abuse working in an Auckland restaurant, and said it left him he feeling depressed and suicidal.

He came to New Zealand to study business and to escape his dangerous lifestyle back home.

“The main reason was drugs, because I was addicted to drugs when I was in India.”

After several months in the country, Hardeep says he found a job in an Indian restaurant as a kitchenhand and worked night shifts seven days a week.

He says he was paid just $7 an hour in cash.

The restaurant owners got away with paying him so little by lying to IRD, says Hardeep.

Although he was working at least 40 hours each week, his employer would say he was only working 20 for $16 an hour.

“I felt like I would go back to India or I would do a suicide because I was in so much depression.”

“I had no money at that time. Those were the worst years for me.”

Hardeep says he didn’t want to speak out for fear of losing the little money he was making, or losing his student visa since he was working over the allowed threshold.

According to Studylink, full-time international students are permitted to work for a maximum of 20 hours per week during studies and full-time during holidays.

“The students are fearing IRD and visa issues. They don’t want to get in trouble. If the government just assures them that they’re not going to get into trouble, definitely they will complain against [employers] and people can take action.”

Employers and Manufacturers Association chief executive Kim Campbell says exploitation is widespread enough that the association backed legislation to give the inspectorate more power to crack down on the problem.

“We have no problems with the inspectorate going after these scumbags. They’re doing nobody any favours.”

Campbell says it’s disappointing to see that many of the people doing the exploiting are migrants themselves.

“Certainly these employers should be brought to task and the young people should definitely lay a complaint.”

Aman Singh*, 25, came to New Zealand about a year ago to study business.

He managed to land a job as a truck driver with an Indian employer and over the three weeks in the job, Aman says he worked at least 180 hours and was only paid $700 in cash; an average of just $3.90 an hour.

He says his boss didn’t pay him at all for his first week since it was considered “training” and made him work hours without this entitled breaks.

By the end of his third week, Aman was fed up and decided to leave the job.

“I refused to continue working long shifts, the manager told me that he would not be paying me for the third week in that case.”

His trade union is currently in talks with his former employer and Aman is determined not to see other young Indians caught in the same situation.

Dr Francis Collins from The University of Auckland says while it’s difficult to say exactly how many young migrants are being exploited, research suggest some groups are more vulnerable than others.

In a survey of nearly 900 migrants on student and work visas, Collins found that students from India and the Philippines were much more likely to be in debt as a result of migrating to New Zealand, meaning there was likely to be more pressure on them to find employment when they got here.

“International students can also be vulnerable because of their aspirations for permanent residence after study, something that demands work experience and possible money to get by on,” says Collins.

“There is also some indication that migrants who get jobs through friends and family, rather than through job advertisements, are likely to earn much lower rates of pay. This is particularly the case for students from India.”

Listen: Mava Moayyed speaks to Jesse Mulligan about the exploitation of international students

The full findings from Collins’ research are yet to be released but he expects the information will show that changes at policy level will go a long way to reducing the risks of migrant exploitation.

“While our current migration policies provide opportunities for many people to live, work and study here, they also create situations where new migrants are under pressure to get the next visa and as a result are vulnerable to exploitation."

*Some names have been changed to protect the identity of individuals

This story was produced with funding support from NZ On Air