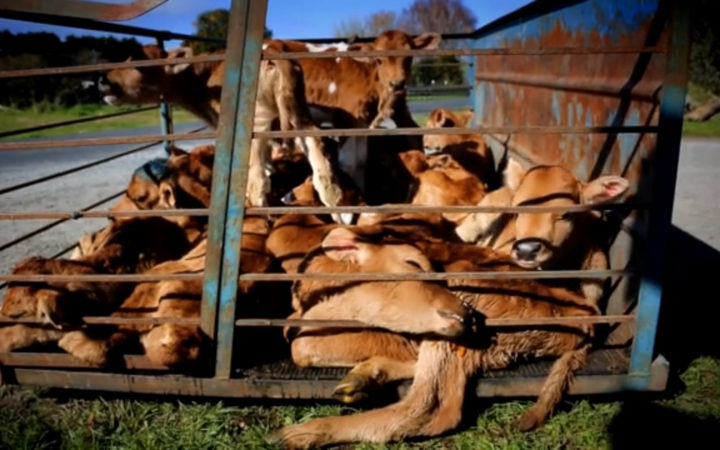 Farmwatch's hidden camera footage has drawn attention to the treatment of animals in the dairy industry. Photo: Screengrab: Farmwatch's 'The dark side of the NZ Dairy Industry'

Animal welfare organisations SAFE and Farmwatch started an investigation into the dairy industry in August, setting up hidden cameras across 12 farms and a slaughterhouse.

Footage shows animal cruelty, including a man violently kicking and throwing calves before bashing them and slitting their throats.

"In order for a cow to produce milk, she first has to produce a calf, and these calves are often surplus to requirement by the industry so they are removed from the mothers quickly after birth and many of these calves are then taken to the slaughterhouse."

"They're being kicked, they're being thrown and the footage that people are upset about was only a fraction and it didn't show the worst."

Kriek said he had made a complaint to the Ministry for Primary Industries but had not received a response.

The dark side of the NZ Dairy Industry from Farmwatch on Vimeo.

Federated Farmers dairy section chair Andrew Hoggard said it was appalling behaviour from a minority of people who worked in the industry and would not be tolerated.

Farmers had to work within strict animal welfare rules and the vast majority cared for their stock humanely, he said.

“While bobby calves will always be part of the dairy industry, they must be treated with care and respect. Behaviour in this footage in no way represents the vast majority of New Zealand farmers who care about their animals.

"As a co-operative we take a hard line on animal welfare. We're investigating this and will be taking strong action if any of our people were involved."

DairyNZ said it was taking the issue very seriously and was working closely with other industry partners.

The Ministry for Primary Industries has not been available for comment.