Out of thousands of amateur K-pop performers all over the globe, a handful of teams travelled to the “Mecca” of K-pop to battle it out for the world title.

It's a warm morning in South Korea. A small woman holds up a megaphone to her mouth. “Guys, listen to me!” She’s been shouting instructions for nearly a week and you can tell she’s getting a little impatient.

“Who here thinks they can ride a bike, like, really professionally?”

There’s a slight pause while 57 young people sitting on fixed-gear bicycles think about their riding abilities. About twenty hands shoot up.

It’s an odd sight. On October 29, by a picturesque river in the industrial city of Changown, a hoard of bikes and bodies awkwardly rearrange themselves into good riders at the front and average ones at the back. It becomes clear pretty quickly that no one is particularly “professional” at bike riding, but it’s OK because they’re not really there to cycle. They’re here to perform K-pop.

K-pop, short for Korean pop, is a genre of music that first swept through South Korea in the early 1990s. Quite simply, it’s pop in its most potent form.

Most New Zealanders’ knowledge of the K-pop probably begins and ends with ‘Gangnam Style’: an infectious song that broke YouTube records when it was released in 2012. In fact, the video got so many views (2.4 billion and counting), it exceeded YouTube’s view limit, forcing the website to update its algorithms.

While most of K-pop doesn’t actually share the goofy vibe of ‘Gangnam Style’, its success showed the rest of the world that the “Korean Wave” is coming in strong and we’re all getting a little bit wet.

About five years ago, South Korea’s Ministry of Foreign Affairs launched an annual K-pop competition. It gives amateur, non-Korean K-pop performers, a chance to compete on stage in front of thousands.

K-pop World Festival’s chief director Han Sang-gil says the idea for the competition came after talking to K-pop fans and hearing about how much they wanted to go to the birthplace of the genre. 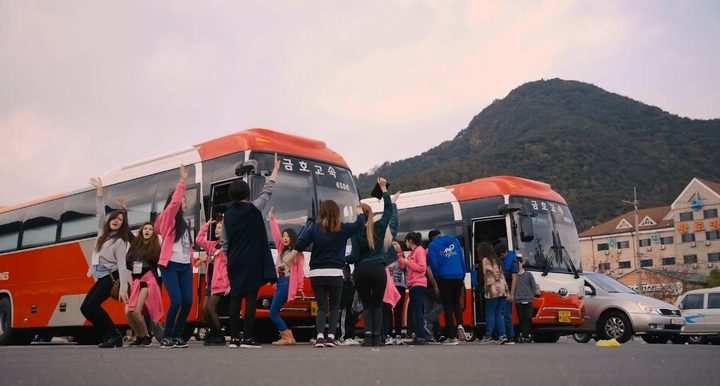 K-pop World Festival competitors practice their moves before getting on a bus Photo: Unknown

“This [festival] could be called a service for K-pop fans, to give them the opportunity to visit the Mecca of K-pop, and perform on the same stage with the greatest K-pop stars. That is the major goal of this event.”

The Korean Wave (or Hallyu) is the term used to describe the growing worldwide popularity of South Korean culture. It started with Korean television dramas in the 90s but K-pop is arguably the most important part of the wave. The music industry grossed nearly $3.4 billion in the first half of 2012, a 27.8 per cent increase from the year before.

The K-pop World Festival is one way of continuing the wave. This year, about 12,000 participants from nearly 70 countries competed in preliminary rounds around the globe.

New Zealand had its own leg of the competition which ran in Wellington a few months ago. ACE Crew, a seven-piece dance group from Auckland, won first place in the performance category while Tahlia Jones got the top spot for her Korean vocals. For a country of just 4 million, the level of talent here is surprisingly high.

From the thousands of hopeful K-poppers, only 14 teams made up of 57 competitors were invited to South Korea. They came from places like Vietnam, Morocco, Nigeria, Mexico, Finland and Ecuador. They spent a week training, meeting K-pop performers, and generally getting a taste of the country that birthed the music they love.

“We want the participants to not only experience K-pop but also have a general cultural experience when they visit Korea,” says Han.

“But the participants are busy every night practicing for the event, so I’m not sure if they are really fully engaged in those cultural experiences.”

The bike ride around the river - plus the tea tasting, instrument playing, and persimmon farm visit - is meant to give participants hands-on experience of South Korean culture.

But Hang Sang Kil is right; all through their site-seeing trips, the competitors are pre-occupied with practicing. They dance on the bus, bust out moves on the street, and perfect their vocal harmonies while sitting at traditional Korean foot spas.

The way to win the K-pop World Festival is by performing a popular K-pop act better than any other team. The competition isn’t about originality, it’s about how well you can reproduce a hit song, and it’s actually much harder than it sounds.

K-pop stars are meticulously trained for years before they’re presented to the masses. Many never gain traction and eventually disappear but the best groups, the ones that create songs listened to by millions, are incredibly disciplined, in sync performers who know just the right way to tilt their heads and flick their hair.

Every minute of practice counts in this competition and the team of five boisterous young men from Nigeria say they practiced every single day back home in Abuja. 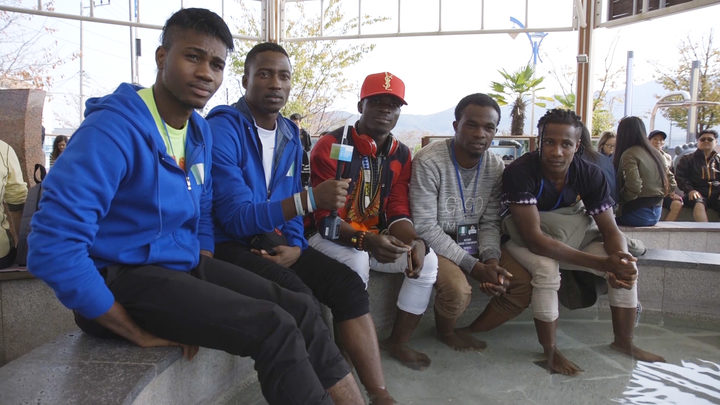 “We all have different companies we work with and different crews we dance with but we wanted the best for K-pop. We didn’t want to have to go in and not win or go in and fail. We’re like an all-star selection,” says one of the group’s members, Ennobong.

The fact the K-pop has a growing fan base in Nigeria is a testament to its indiscriminate likeability. Even in New Zealand there is a small but dedicated fanbase. In the last few years, big Korean entertainment companies have held auditions in New Zealand in search of their next star.

While none of our performers made it to the final of the festival this year, the dance crew from Finland are quick to point out our strong connection to K-pop.

“Actually Parris has done a lot of choreographs for K-pop artists,” says Aron, a 20-year-old member of the Finnish group.

He’s talking about Parris Goebel, the world-renowned New Zealand choreographer who has worked with some of the music’s biggest stars, including Jennifer Lopez, Nicki Minaj and Justin Bieber. But the Finns are much more interested in the K-pop the 24-year-old has choreographed, including girl group 4Minute and boy band BIGBANG.

“I love her a lot. Her style is so cool and very powerful. It’s very unique and I love the way she’s a strong woman and does everything herself”, says Aron.

The night after the bike ride, on Friday October 30, the K-pop World Festival kicks off at a huge stadium in Changwon. A drone flies overhead getting the best shots for the live broadcast of the event, while a sea of cameras, lights, producers, and journalists get ready for the show to kick off.

The seats fill up early with what seems like predominately very young girls. Some holdup glow sticks, others iPhones, and a few hundred wear blinking headbands. There’s one thing unites them all - screaming.

K-pop has a hypnotic quality... it’s like watching a human kaleidoscope.

It’s not the usual “woohoo” you hear at concerts; it’s a scream that sounds like they’re in pain. A scream that makes it clear these young girls are feeling a lot of emotions.

About 20,000 Koreans turn out to the event, but it quickly became clear they hadn’t actually come to see the competition. The K-pop World Festival is just as much about the guests acts featuring on the night as it the amateurs battling it out for the title. They are some of the country's biggest K-pop groups and when they walk out on stage, they send a wave of hysteria over the crowd.

It all begins to make sense when you see it live. K-pop has a hypnotic quality. It's a mixture of perfectly synchronised dances, dazzling outfits, and flawless faces. It’s like watching a human kaleidoscope, bodies creating beautiful shapes and colours, making it hard to turn away.

Once the big acts of the night finish, about three-quarters of the crowd leave. They don’t even stay to hear the winners of the competition which, by the way, are the boisterous boys from Nigeria. The receding crowd doesn’t seem to bother them though - the announcement of their win is followed by them ripping open their shirts, falling to their knees and crying.

And what do the Nigerians get? About US$10,000 in cash and a really cool thing to add to their CVs.

“Most of the past winners who are talented got to do various activities when they returned home. Some became professors of K-pop and some made a debut as a singer in their country,” says Han Sang-gil.

As impressive as it was watching non-Koreans dance and sing along to K-pop, it wont ever be quite as good as seeing the "real" performers. South Korea has nailed the art of moulding mega pop stars, the type you can't help but scream over. And if the fan base in New Zealand keeps growing, we may get the Korean Waves lapping at our shores soon.

"I had an opportunity to visit New Zealand about a year ago", says Han. "The most popular request from those fans was to bring K-pop stars to New Zealand. I hope that request would soon be realised."

This content is brought to you with funding support from NZ On Air and the Korean Culture and Information Service.