For trans* youth, finding support is hard and getting funding for surgery is even harder.

Oliver Rabbett was born with a female parts but began telling people he identified as a male when he was 16.

His family were supportive, he says, but for a while stumbled over the little things like pronouns and his new name.

Oliver’s face turns grim for a moment as he explains that his best friend couldn’t come to terms with his plan to transition and is no longer a part of his life.

“There are always going to be people that don’t understand, but if they don’t respect you then you don’t need them in your life.”

Oliver and his mum were going for a walk when he decided to tell her he no longer identified as a girl. “I turned to her and said, ‘Mum, I feel like a boy’.”

She began telling him stories from when he was a child, how he would scream and cry when she put him into a dress. The stories proved to them both that he should have been born male. His mum wasn’t surprised and said “it all made sense”.

Oliver has since been diagnosed with gender dysphoria, a term used to explain that he doesn’t identify with the biological sex he was born with.

Support for trans* youth isn’t always easy to come by in New Zealand and funding for surgeries is even harder.

Surgeries like mastectomies are available for those transitioning from female to male but the cost is restrictive, but there is currently no one in New Zealand capable of performing sex reassignment surgery.

Oliver’s grandma took a little time to come to terms with his transition, but once she did she has provided unwavering emotional and financial support. She paid $13,000 for him to have his breasts removed by a private surgeon in Christchurch three years ago.

The surgery involved cutting into his chest and removing the breast tissue. His nipples were cut off, resized and then stitched back into place. 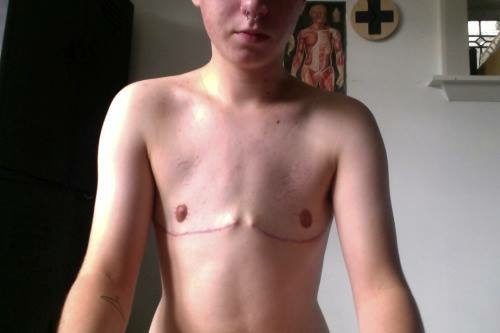 Oliver shortly after having his breasts removed. Photo: Supplied

The surgery was followed by two months of recuperation during which he couldn’t move his arms above his head due to pain and stiffness.

Having his breasts removed went a long way for Oliver’s confidence. He becomes animated as he describes being able to wear tight t-shirts and wear what he wants.

For this, Oliver considers himself one of the lucky ones but he is aware the process isn’t so easy for other trans* people in New Zealand due to the cost of surgery.

Oliver began taking testosterone treatments three years ago. The hormone comes in vials and is injected into the top of his hip every two weeks.

To start hormone therapy he needed a letter from a psychiatrist saying that his biological gender was impacting his mental health and clearly doesn’t match how the gender he identifies with.

Before he was given his first injection of testosterone, Oliver was assessed by two hospital psychiatrists, who he describes as intimidating and scary.

“They’d only seen about two other trans people in their whole career. I felt like I was trying to prove myself, which was not a nice feeling.”

They’d only seen about two other trans people in their whole career. I felt like I was trying to prove myself, which was not a nice feeling.

The cost of transitioning gender is never-ending. Trans* people wanting hormone treatment are required to see a specialist at least once a year for the rest of their lives and each appointment costs up to $200.

Earlier this year, Oliver had his ovaries and uterus removed at the Christchurch Women’s Hospital. Gas used in the surgery escaped to under his lungs, leading to days of pain.

Despite going through two invasive surgeries and so far paying over $13,000, Oliver is considering getting genital reassignment surgery in the future.

There are currently 72 people on the waiting list for genital reassignment surgery. Only three surgeries for male to female reassignment and one female to male are funded by the Health Ministry every two years. There is currently no doctor qualified to do the operation in New Zealand.

The best someone wanting gender reassignment surgery can hope for right now is that they’ll be placed on the waiting list to have the operation done overseas.

To get on the list they must provide two psychiatric reports by senior psychiatrists and one report from a psychologist or social worker with experience in transgender people. They also have to prove they have undergone more than 12 months of continuous hormonal treatments, and document that they have been living and working fulltime for at least two years as a man/woman.

Four people are almost there, but the Health Ministry still needs to approve a surgeon overseas.

The Health Ministry says the male to female surgeries will continue to be provided overseas until a surgical team is able to provide the procedure in New Zealand. 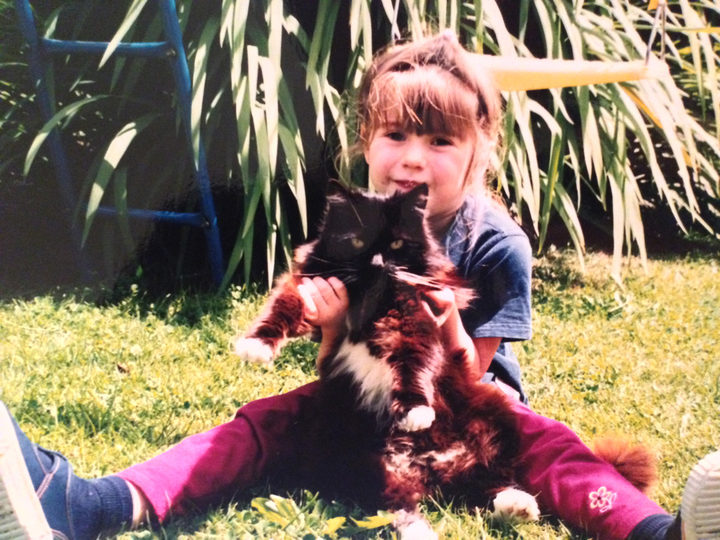 Oliver was diagnosed with gender dysphoria, a term used to explain that he doesn’t identify with the biological sex he was born with. Photo: Supplied

One of the people on the waiting list is 20-year-old Katelyn Thomas.

Katelyn was born with a male parts but has lived as a woman for the past two years. She lives in Tauranga where she is studying to become a nurse.

Katelyn says there is no trans* community in Tauranga and has to rely solely on mutual friends to find other trans* people.

“If you know someone that knows someone who is trans it’s just like, ‘hook a sister up, let’s be friends’.”

Katelyn takes oestrogen pills and has had Botox and lip fillers in order to look more feminine, but she wishes to take her transition the whole way, including having genital reassignment surgery.

For people with male parts, this surgery means using the skin from their penis and scrotum to form a vaginal lining and labia. Surgeons can also create a fully functioning and sensitive clitoris from the penis glans.The surgery can cost up to $30,000.

Katelyn believes she is about number 60 on the waiting list.

“It’s so frustrating because you get so far in your transition and then hit a wall.”

It’s so frustrating because you get so far in your transition and then hit a wall.

Katelyn has been on hormones for two years. The oestrogen she takes causes her body fat to redistribute, giving her breasts and curves.

Hormones don’t have the magic effect that trans* people want, but they go a long way to help her look like a female, she says.

It wasn’t until she was standing in her underwear with a male friend in a full length mirror at Farmers that Katelyn realised what a difference the hormones had made to her body.

“I thought ‘that’s what my body would have looked like without the hormones’.”

Katelyn began her transition while she was still attending an all-male boarding school in Tauranga. She had to drive four hours to New Plymouth to see a hormone specialist.

Her high school’s dean drove her to the appointments and he advised her to freeze some of her sperm before she started taking oestrogen.

Despite having support from her dean, Katelyn’s school friends quickly became distant and stopped talking to her.“I would walk down the hall with another friend and people would yell names and throw fruit at us.”

Katelyn eventually left the boarding school after she attempted suicide. Despite all this, she is adamant that she will get the reassignment surgery.

“A lot of people think that being transgender is just playing dress up, but for many trans people the surgery is a key part of our transition.”

Katelyn believes that getting the surgery will change her life for the better. She says that people generally lose interest in her after she explains she is trans*. She believes this will change once she has had the reassignment surgery.

A lot of people think that being transgender is just playing dress up, but for many trans people the surgery is a key part of our transition.

“I get rejected by guys all the time. Trans or not, if I just had a vagina then it would be none of their business - they would never know.”

Dr Sue Bagshaw says everyone is waiting for a surgeon capable of performing the operation. As a doctor at the 198 Youth Clinic in Christchurch, she has seen first-hand the effects of the lack of funding and support going into trans* health care.

The clinic is one of the few places in New Zealand that trans* youth can go to for  counselling and medical help.

Dr Bagshaw says she believes the cost is one of the main things preventing trans* youth from having surgery. She believes surgeries such as mastectomies and hysterectomies can make a huge difference to people’s lives and should be cheaper.

“It’s touch and go as to what’s cheaper: going overseas and paying for both the travel and the operation, or getting it done here.”

She explains that suicide, anxiety, social phobias and depression are among the effects of trans* youth not getting the support that they need. “Some of them won’t face people because they just can’t face living a lie.”

There needs to be a “one-stop” clinic where people can come for their counselling, medical advice, hormone treatments and surgeries, Dr Bagshaw says.

“It just makes their lives turn around and be so much better if they can get these things done.”

This content is brought to you with funding support from NZ On Air.