Going along to speak in front of a group of MPs about something you're passionate about can be a daunting thought. The Wireless spoke to some submitters to find out what it's like to present a submission to a select committee at Parliament. 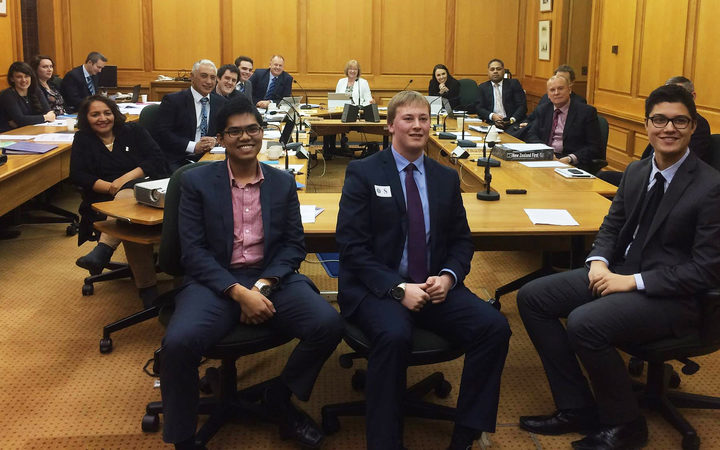 A select committee is basically a group of MPs from different political parties who work together to consider legislation going through Parliament.

There are some exceptions, as some laws are passed under urgency and bypass the select committee process, but, in general, select committees vet any new law or law change and report back with recommendations.

Committees receive advice from officials and hear or read submissions from the public. Anybody can make a submission.

The committees are broken down into 13 areas including health, business, local government and the environment, Maori affairs, education and science and foreign affairs and trade.

The National Youth Advisory Group (set up by the Ministry of Youth Development) made a submission to the Justice and Electoral committee in July about why young people did or didn't vote in the 2014 election.

The figures aren't great - more than half of all people under 30 didn't vote in last year's election.

The group put their submission together after doing an online survey coupled with some focus groups. Its lead submitter, Brad Olsen, 18, who's based in Wellington, says it was quite an inspirational experience to present the submission.

"The ability to go in and talk to MPs was really empowering but also made me aware that our MPs actually do recognise the value of young people and they are, or do seem to be, looking for ways to engage young people more."

He was impressed by how approachable the MPs seemed. "These guys just talked like real people, asked simple questions ... no highly technical vocabulary."

Another of the group, Josiah Tualamali'i, 20, of Christchurch, says he really wants to see more young people, particularly Pacific youth, have more of a voice in New Zealand politics.

One of the group's main recommendations is for the Government to introduce civic education into schools to help students feel more engaged with the political process.

Josiah says the low voting turnout for youth at last year's election was "really abysmal". "The size of Wellington, 200,000 young people or a bit above that, didn't vote."

He says the group wanted the MPs to know the realities of why young people didn't vote.

Josiah reckons one of the reasons the turnout was so low is that people don't get a chance to make many decisions at high school. "A really good opportunity for young people to contribute to democracy or learn the value of their voice could be electing head students or prefects but they don't necessarily get to do that."

The group suggested online voting as an option to make voting more accessible but the group who submitted before them disagreed, he says. "Our perspective did conflict with some of the other people who presented. Like beforehand they were saying it was a really dangerous idea...but we were like 'our young people say they're more likely to engage if they have that option."

One of the group's Hamilton representative's, Jason Sebestian, 24, says he's submitted before on the Marriage Amendment Bill but it was still nerve-wracking the second time round. "It's probably less formal than you think it is...[the MPs] were pretty lively and engaged. Yeah, they were pretty friendly."

Labour MP Chris Hipkins says select committees are a really important part of democracy. "It's the part where the public of New Zealand get to come in and scrutinise what Parliament is getting up to and provide feedback, provide comment, " he says.

He would love to see more people, particularly young people, getting involved.

And he's also got some tips if you're going to appear before a select committee: "Take a deep breath, Relax. Think about the main points...Don't be intimidated by the whole process. It's your absolute right to be there and to be involved."

Most select committee meetings are held on Wednesday and Thursday mornings, when the House is sitting.

You don't have to go the select committee to watch the action - you can watch it live streamed by webcast here. And you can find out more information about select committees or anything else Parliament-related here.

This content was made for The Wireless with funding from Parliament.