Dating app Tinder is all about finding love, but with so many scammers in the mix, is it still safe to swipe right? 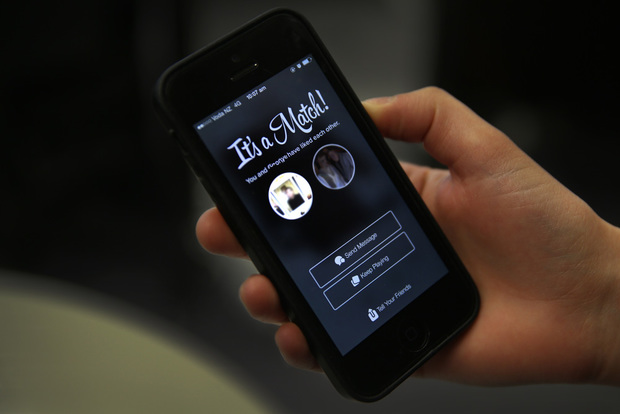 When Simon* agreed to meet up with the girl he’d been chatting to on Tinder, part of him wasn’t sure it was a good idea.

“I came in from the carpark so I could scope out the alleyway before I even got to the café. I just wanted to make sure I wasn’t going to get beaten up or anything.”

It might seem paranoid, but Simon wasn’t about to take any chances. Over the last few weeks the 32-year-old has been hit with three scam attempts on Tinder.

Tinder is a location-aware mobile dating app that leverages your Facebook profile, and attempts to match you with others who have common interests, friends, or that live near you.

The app has more than 50 million users worldwide each month and the company's communications director, Rossette Pambakian, told The Wireless last year that more than 11 per cent of New Zealanders are Tindering.

Tinder's high uptake has a lot to do with its ease of use. The app presents you with photos of potential matches and you swipe right on the ones you're interested in, and left if you’re not.

If someone you swiped right does the same, then a “match” is made and Tinder lets you to chat with each other. According to the company, more than 26 million matches are made every day.

But romance scams, sometimes called "catfishing", are a reality of online dating and Tinder’s popularity has made it a magnet for scammers. Even after the site’s crackdown on obvious scams, users are complaining about phony profiles and dodgy dates.

Earlier this year, police in New Zealand were investigating allegations that encounters arranged over mobile dating apps like Tinder ended in sexual assaults and recently in Australia, a Tinder date ended in an armed robbery.

Simon’s Tinder date turned out to be real, which was almost a surprise after so many spam bots and attempted scams.

"You have to go through a lot just to get to that one person," he says.

The first scam attempt Simon encountered was from a person he matched with while in Whanganui. The girl struck up a conversation that quickly led to a plea for help.

“The girl was saying she was stuck in Palmerston North and needed to be picked up. When I said I was in Whanganui and couldn’t help her, she said if I sent money she’s make it worth my while.”

Simon brushed it off as odd occurrence, but the following week he got another match and other request for money. This time he saved the message.

Hey im Mia nice to meet you good to have some company been so over stressed. My ex didnt pay my petrol home like he said he would so now im stuck here with my daughter. So worried weve been here all day how was your day hun? Where do u live x”

By the time Simon got the third suspect message, he was beginning to rethink the value of Tinder. Again, the person asked for help with their car. 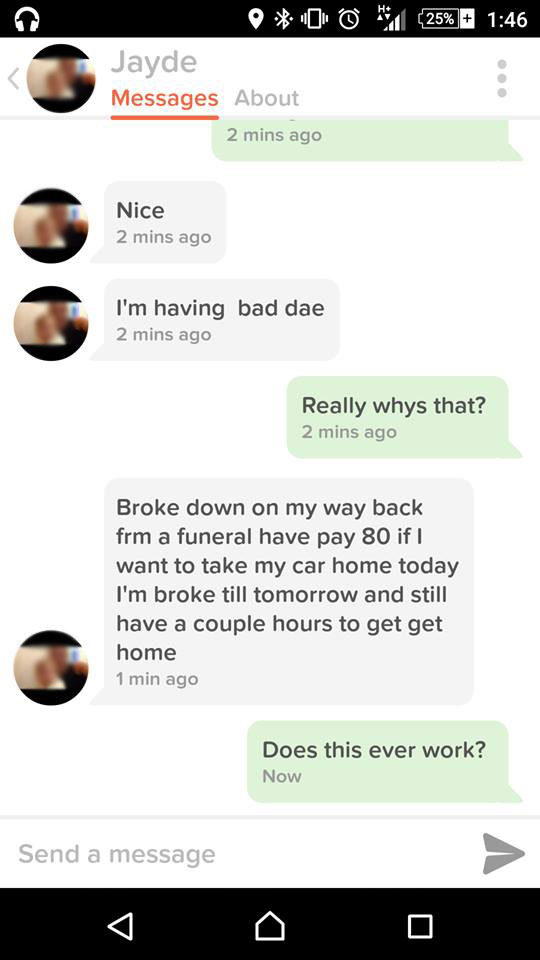 “It a feels like they’re connected because they all opened with ‘I’m really stressed’ or ‘I’m having a bad day. I mean, if I was going to scam someone, I’d build it up a bit first.”

While Tinder has for a long time had been flooded with spam bots – fake accounts that flirt with users in order to redirect them to explicit sites  – Simon says these are different.

“They’re definitely real people because they answer specific questions and they use real photos that I’m assuming they’re taken off Facebook profiles.”

All three suspect scammers unmatched Simon quickly after they realised he had cottoned on.

“If they unmatch, then you can’t even report them.  From their side, it’s quite an effective way of not getting caught.”

Simon says he can’t imagine scams on Tinder going away, and has given up on using the dating app.

“I think we’re only starting to see the beginning of it. If the scammers are smart, it could easily escalate.”

Wellington resident Caleb* has also noticed a string of scams.

“The thing is, guys are controlled by their members,” he says. “That’s the way it is, so if [scammers] play their cards right, there is a chance they’ll get the guy.”

Caleb remembers recently swiping right on a profile of 20-year-old with lots of tattoos.

“She started talking and seemed a little more interested that other people, but then really early on she started sending photos, really racy photos.”

The 38-year-old says the person then abruptly asked which bank he used, making it very obvious what their motives were.

“I said to her: ‘Do I look stupid to you? Does my photo look stupid?' I knew straight away. It was pretty obvious but she just tried to avoid the subject.”

The second scammer was even less convincing than the first, says Caleb.

“She just said ‘hey, I’m in Masterston and my car is stuck in the garage and a need a new battery. Could you help me out?' She really pleaded innocent the whole time.”

I guess you just have to trust your instincts. Never give money, I guess that’s a pretty good rule.

It’s easy for people to get sucked in, Caleb says, especially if they’re desperate to find a partner.

“It’s legitimate for people to want to meet each other. I guess you just have to trust your instincts. Never give money, I guess that’s a pretty good rule.”

Lee Chisholm, training and education specialist at NetSafe, says the organisation gets about 800 reports of internet scams every month.

“It’s only the tip of the iceberg actually. There are many more people being scammed than reporting.”

As Tinder has gotten more and more popular, the number of reports about scams on the app have been increasing, says Chisholm.

“The usual story with any type of online dating or romance scam is ultimately they’re asking for money and it's happening all across the country.”

Chisholm says users should be wary of anyone who asks for money early in a conversation, even if it sounds like it’s for a good reason.

“People just need to not give money to people they don’t know. They should cut all the contact with that person immediately.”

But sometimes it’s not that easy, and 26-year-old Regan* found this out the hard way.

“I had a match with someone and it was going pretty well. We were chatting and had quite a good rapport going,” he says

A little while later the person, who said her name was Sophia and lived in Wellington’s Lambton Quay, told Regan she had a confession to make.

To hook Regan in Sophia sent him a link to a website showing off her raunchy photos, but The Wireless investigated Sophia’s pictures and found they were actually stolen from an American webcam star called Harliequinxx. 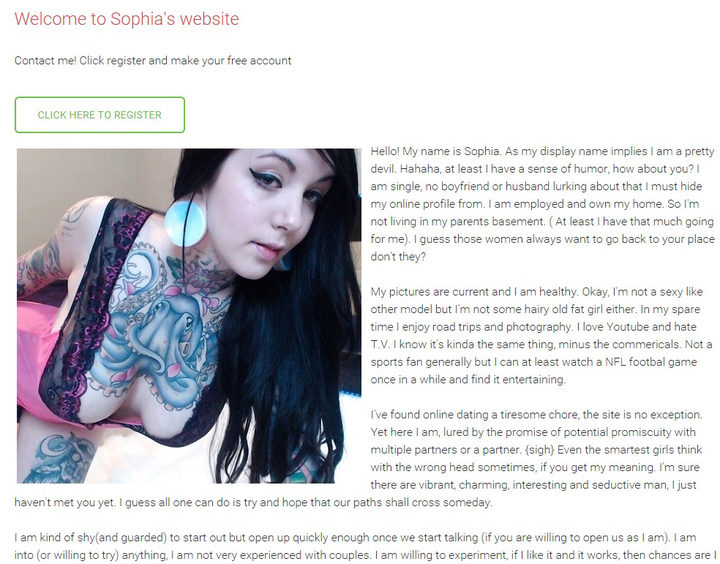 But Reagan had no idea the photos were stolen and Sophia wasn't real.

“This is where it was stupid on my part, but she got me hook, line and sinker.”

Sophia told him to put in his credit card details into a website she linked, but also gave him a numerical code that she promised would reverse the payment and give him free access to her webcam.

“I put in my credit card details but instead of going to a webcam, it just sent me to these different dating websites around the world. One of them was even in Nicosia, Cyprus.”

“When I told her it wasn’t working, she just keep repeating the instructions and telling me to make sure I did each step.”

Regan began to realised he was being duped, but by that point he’d already lost $60.

“I started to call her bluff and said ‘well you live in Lambton Quay so let’s meet, yeah?’ She never got to a point where she agreed to meet me.”

Regan resigned himself to the fact he wasn’t going to get the money back, deciding not to go to his bank for a refund.

“I wasn’t sure how fraudulent it is because I consented to a page, even though I thought I would be recouped. I didn’t know if that would legally stand-up.”

My gut was initially telling me this could be a scam but my emotions permitted me to do it anyway. It was just an irrational decision.

Regan said he’s learnt his lesson and although he’s a bit embarrassed, he’s found a funny side.

“I told my friends about it the next day and they gave me so much shit. But it's ok, I don’t care, it’s a funny story.”

“My advice would be don’t be an idiot” he laughs.

“Also, trust your gut. My gut was initially telling me this could be a scam but my emotions permitted me to do it anyway. It was just an irrational decision.”

Police told The Wireless that they are aware of a number of online scams that do the rounds, but can’t say for sure right now if they are from Tinder or other apps and websites.

And it’s not just the initial scam people should be wary of; victims can be stung by follow-up scams from clever con artists pretending to be helpful law enforcement.

“Once one offender is unable to get any more money from a victim, they pass on the details of the victim to another offender who pretends to be the police or other agency trying to get the victim's money back, only to ask for more money” says a police spokesperson.

Police also warn people not to travel to foreign countries on the basis of online interactions, and definitely not carry any items, bags or goods for anyone they meet on the web.

“People may unwittingly end up becoming a drug courier for organised crime groups.”

Anyone who believes they are a victim of crime, in person or online should report the matter to their local police. You can also report scams via Netsafe’s online reporting website.

*Some names have been changed to protect identities.