Drink prices are going up and so is preloading. 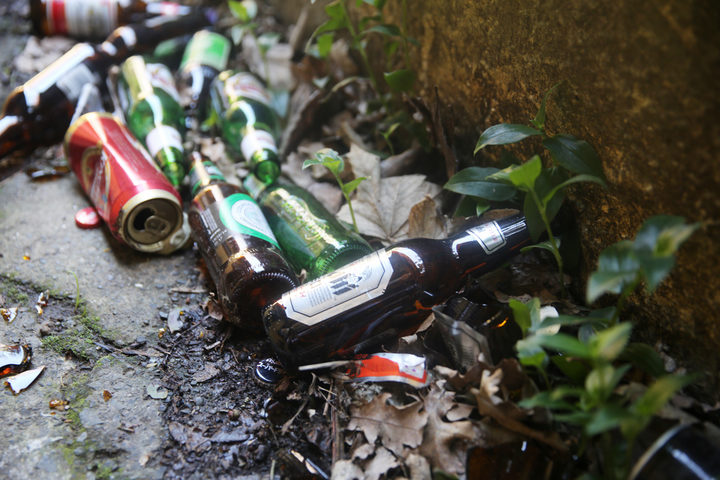 “I do not enjoy the taste of the alcohol, I only drink to get drunk.”

Chris, 22, is braving a bitterly cold night in Wellington with his best friend Sam. It’s 11pm and the pair have already shared half a bottle of gin at home and a couple bottles of wine at a BYO.

“Every time we go out we pre-load because drinks in town are expensive,” says Chris. “I’m a big male, I can't afford to get drunk in town.”

Chris and Sam are both students and with limited funds, they’ve figured out a formula to get the maximum effect from their drinks.

“There’s a complex equation, which is standards drinks versus volume and price. I mean, beer is very cheap but it’s too much liquid to the amount of alcohol,” Chris says.

“We usually go for a bottle of spirits from the liquor store.”

There has been no lack of debate about our drinking culture in New Zealand and young people are often at the centre of it, probably because they drink more than any other age group.

According to the latest data from the Ministry of Health, about a quarter of 15 to 24-year-olds admitted to risky drinking at a high frequency, more than double the rate of 35 to 44-year-olds at 12 per cent.

Drinking to intoxication is more prevalent among younger age groups with 16.2 per cent of 15 to 24-year-olds saying they were drunk at least once a week compared to 7.6 per cent of 34 to 44-year-olds.

But the debate seems to have come to a head in recent times with a stream of booze-related changes around the country, like a police crackdown on preloaders, the closure of bars in Dunedin, and a nationwide campaign aimed at altering our drinking habits.

“The bars are where we see a lot of the offences that draws police attention - the intoxication, the disorder - but it’s not where it starts.”

There’s a growing trend of preloading, where young people are loading up on alcohol before heading into town, Rapira-Davies says.

“It did used to occur when I was young, but probably more so now. One of the reasons is the flood of ready-to-drink or RTDs that didn’t exist so much so back then.”

At least two-thirds of New Zealanders said they consumed alcohol before going to bars or nightclubs last year, and about 21 per cent said they normally felt drunk before arriving at a bar.

Rates are especially high among young people, with a 2013 survey in Palmerston North finding 69 per cent of 18-35 year olds drank alcohol before a night out.

In an effort to curb party-goers heading into the city with drinks in hand, Wellington police have kicked off a crackdown on illegal drinking in the streets, dubbed Operation Preload.

The bars are where we see a lot of the offences that draws police attention, the intoxication the disorder, but it’s not where it starts.

Anyone caught with an open bottle in the council's liquor ban area can be slapped with a $250 fine, and in first night of the sting, 60 young Wellingtonians were fined.

Police carried out a second blitz last month and fined another 50 young drinkers, bringing the total value of infringements to about $27,500.

Police estimate about half of those caught were students and most were aged between 18 and 24.

“There is no shortage of young people that we come across every Friday and Saturday night in Wellington city drinking in public places and streets,” Rapira-Davies says. “Many of them are well-aware that the community don’t want liquor consumers in the streets, but they see that particular offence as minor.”

Along with his role as a alcohol harm prevention officer, Rapira-Davies spent years tackling family violence and sexual assault. He says alcohol was a factor in many of the incidents he investigated.

“You can speak to any frontline officer and ask what the cells typically look like on a Friday night after midnight and whether there are people in there who aren’t affected by alcohol. In my experience, I’ve never seen one.”

Police estimate at least a third of all recorded offences are committed by someone who has consumed alcohol prior to committing the offence and half of all serious violence crimes are related to alcohol.

COST OF A DRINK

While a single drink at a bar might set you back $10, an entire bottle of vodka and lemonade from the liquor store can cost as little as $13, Rapira-Davies says.

“I went to a local bottle store earlier this week and took a picture of a bottle of vodka for $7.99. In the fridge there were bottles of Coke for $4.99.

“The economics of that decision seems obvious for a young person who only has a small amount of money.”

According to CPI figures, the cost of spirits has risen 25 per cent since 2005, while beer has increased 28.4 per cent and wine 8.1 per cent.

But while the price of alcohol has steadily crawled upwards, students’ incomes have largely stayed put.

READ: GETTING BY ON A STUDENT BUDGET

For many young people, preloading is a money-saving tactic. The logic is obvious when comparing the price of drinks at on-license and off-license premises.

A look around the country revealed a bottle of Heineken at a bar costs four times more than a bottle of the same beer from an off-license shop. 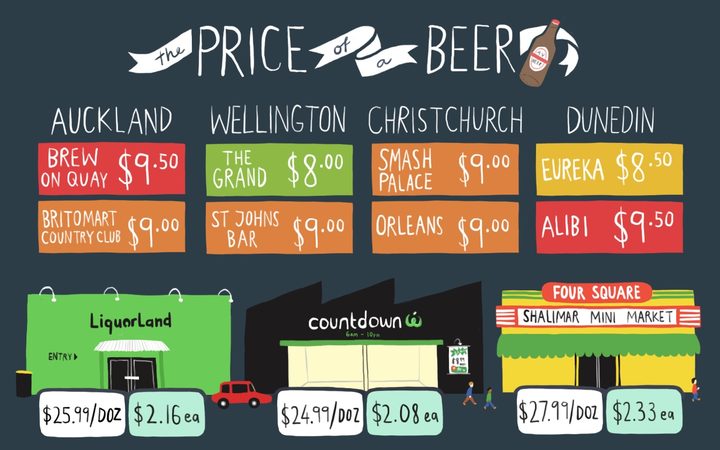 The price disparity is why Dunedin businessman Rob Dale says he was forced to shut all three of his bars earlier this year.

“I had the biggest and busiest bar in the South Island and it wasn’t making any money.”

That bar was Urban Factory and on a busy night more than a thousand people, mainly students, would come through the doors but spend less than a $4 a head, says Dale.

“Our biggest seller was water and of course that’s free. People were leaving the bar far less intoxicated than when they arrived.”

Urban Factory went out of business in April and the following month, Dale announced the closure of Boogie Nites and Capone.

All three venues were situated in Dunedin’s student quarter where Dale says he couldn’t compete with the low alcohol prices at off-license shops where students were loading up before hitting his bars.

“At the front door, we would confiscate hundreds of bottles of alcohol people were trying to smuggle in every week,” he says.

“It’s not just young, broke customers that are preloading. Even my staff would preload before they went out to a staff do. That’s how ingrained in the culture it is!”

Over his career, Dale says has owned about 27 bars and nightclubs, but running them successfully for a young market has become near-impossible. 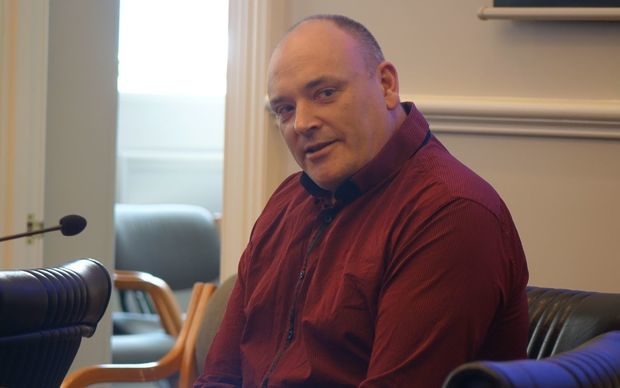 Dunedin's Rob Dale says he was forced to shut all three of his bars. Photo: Ian Telfer/RNZ

“I was an extremely large purchaser of alcohol and I had very good deals with all liquor suppliers and breweries in New Zealand, but I still bought my bottled beer and wine off the shelf from the supermarket,” he says.

“It’s about 10 to 15 per cent cheaper to than at super deal trade prices.”

And it’s not just Dale’s bars - Captain Cook, the Bowling Green, Monkey Bar and the Gardens Tavern are all pubs near the University of Otago which have shut shop in recent years.

Dale is an outspoken critic of Dunedin City Council's alcohol plan and says while the laws makes it easy to police bars and nightclubs, it’s “almost impossible” to hold off-licenses to account.

With fewer bars around that cater to the student market, Dale says we’ll be seeing more parties in the streets.

“I think there is a huge number of people who would’ve normally gone out to bars and now are partying to 5 or 6am in residential areas.” 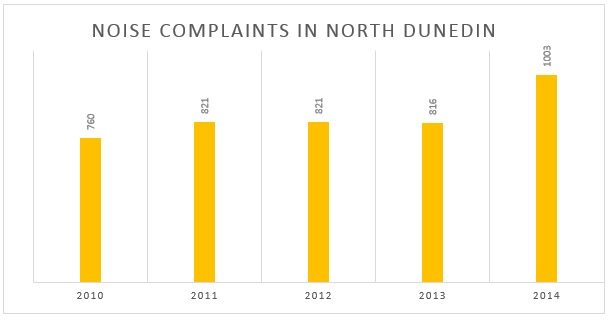 With its dense concentration of students, it seems North Dunedin has been hit hardest by preloading partiers, but in Wellington bartenders say they’re not making much money off students either.

Jonny Abbott, 20, works at The Establishment bar on Wellington’s Courtenay Place and says students preload in the university halls before heading out to town.

“A lot of them try and sneak in little bottles of alcohol. We’re quite good at confiscating them, but the girls put them down the bras which is harder to catch.”

In an effort to attract the student dollar, the bar puts on a dedicated student night every week, but Jonny says young people still try and avoid spending money.

“We have cheap drinks on a Wednesday and even then we have people wanting to split a $5 shot three ways. It’s incredibly frustrating.”

The bar’s duty manager, Tracy Symon, says they have about seven security guards in the bars during the weekends that keep a keen eye on young patrons.

“Security have to check the bathrooms regularly throughout the night because that’s where they go to drink the alcohol they’ve snuck in,” the 26-year-old says.

“On the weekend we try and push the students along because they just take up seats and don’t spend any money.”

CHANGING THE WAY WE DRINK

Dr Andrew Hearn from the Health Promotion Agency says while price is a factor, there are social motivators as well.

“The culture in New Zealand has traditionally been around boozing to intoxication. A lot of us are being swept along in a culture which says if you’re not drinking to excess, then you’re not having fun.”

Hazardous drinking is highest among men and women aged 18-24 years, but Hearn says the rate has actually dropped from 49 per cent to 36 per cent between 2007 and 2012.

“There is a culture change in our midst and a lowering tolerance for drunkenness among young people.”

Laws like the zero alcohol tolerance for drivers under 20 introduced in 2011 also have an impact, Hearn says.

“For years now, we’ve been trying really hard to get a culture change. We’ve been running alcohol ads for a long time.”

The Health Promotion Agency are behind the “Say Yeah, Nah” and “No Beersies” campaigns that focus on giving people social permission to ease up on alcohol.

Hearn says the agency is seeing lower uptake in drinking, especially among the youngest age bracket of 15 to 17-year-olds which fell from 75 per cent in 2007 to 59 percent in 2012. The overall rate dropped 4 per cent in the same period.

But there’s been heated debate around the effectiveness of education campaigns, with many arguing that they don’t work and law changes are the best way is to tackle drinking  problems.

In 2010, the Law Commission released an in-depth review of New Zealand's alcohol laws and offered 153 recommendations that would curb the alcohol-related harm. These included a 50 per cent tax increase on alcohol and a higher purchase age.

As part of the Alcohol Reform Bill, the Government dismissed a tax hike, and a higher purchase age was shot down by MPs in a conscience vote. It did, however, take on a number of other recommendations, limits to including trading hours and outlet density.

Hearn says it’s about tackling the issue from all angles, with policy changes, education and enforcement of law. The nationwide change in attitudes toward drink driving is an example of how it can all work effectively together.

“When I was young, drink driving was rampant, but kids who are in their 20s wouldn’t think about drink-driving now.”