Auckland-based duo Cymbol 303 and This Pale Fire (Shivnesh Sumer and Corban Koschak) are set to release their debut EP, The Cycle, this Friday.

Each song on the release represents a different stage of a relationship, from the initial attraction to when things fall apart, says Corban.

‘Don’t Rob Me’, which you can listen to above, finds itself somewhere between those two extremes. It’s the ‘moving in’ song, where things are getting serious and, as Corban puts it, “the lyrics are essentially saying ‘I’m giving you my heart, please don’t break it’.”

“This relationship pattern seems to repeat that’s why the EP is called The Cycle,” says Corban. “The artwork shows an infinity sign that is breaking slightly, since we are trying to break this cycle and find a good partner.” 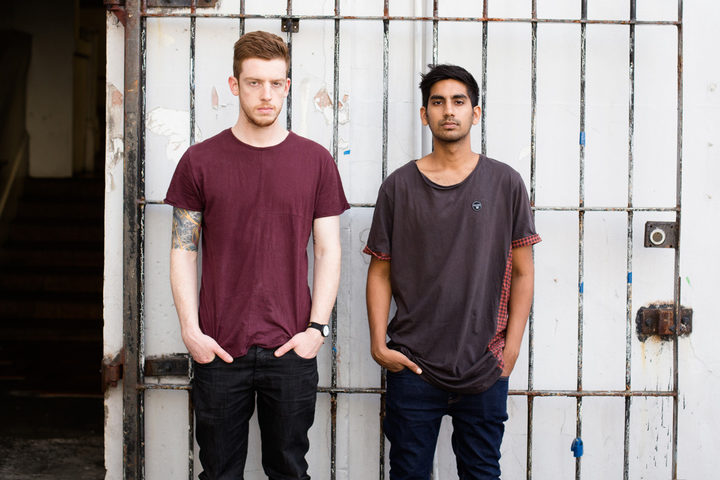 While Corban has indie-rock/singer-songwriter sensibilities, Shivnesh comes at the production with a background in making EDM music. Merging these two styles had its challenges.

Shivnesh says it proved difficult as he wanted to bring in the same emotion with his production soundscapes that Corban was trying to portray with his lyrics.

Shivnesh began playing the keyboard when he was 10 years old, but as he got older he says he wanted to play every instrument but couldn’t, so he started producing beats.

A couple of years ago he won the George FM remix competition and before that he worked on remixing some huge singles, such as Kanye West’s ‘Power’ and  Lorde’s ‘Tennis Court’, which have clocked up hundreds of thousands of plays on Soundcloud. He says he’ll continue to make remixes if he can think of a way to recreate the original, but for now his focus is on making new music of his own.

Speaking of which, both artists are still working on developing their solo projects now that The Cycle is ready to see the light of day. Each have EPs that they’re working on and they will still be collaborating in one way or another, with expectations that they will work on each other’s new music.

From now though, it’s time to celebrate. The duo play Tyler Street Garage in Auckland’s Britomart on Saturday July 25 and they’re also discussing putting together a tour that’ll see them play around the country in the near future.