Yadana Saw explores the many ways musicians hurt themselves. 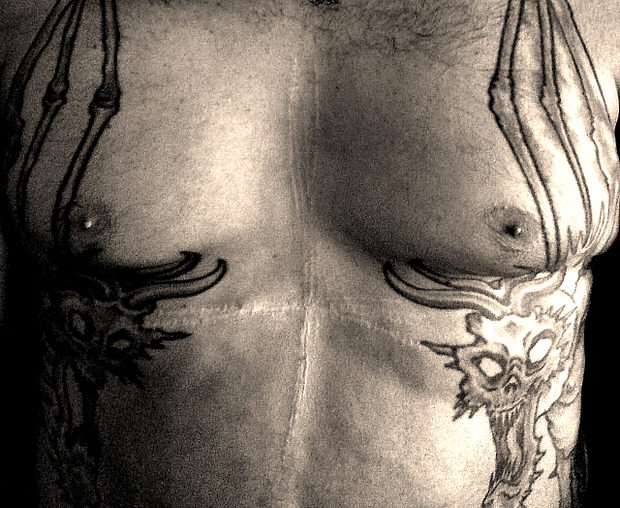 Take one black metal bassist, a packet of medical grade scalpels and the biggest music event in the extreme metal scene and you are guaranteed to carve yourself into metal folklore. Literally.

Music isn’t often associated with life-threatening danger - as the more risky proposition is the off-stage, after-hours pursuits of many musicians. But whatever the genre or instrument, the passion to play your very best can have some unexpected and unwanted consequences.

Skuldom are the sort of band that are committed to the extreme. They wear helmets covered in human excrement; syringe out their own blood onto themselves before playing a set; hang rotting sheep heads as stage props. Self-mutilation is standard-practice for a band deadly serious about their hardcore aesthetic as the band’s lyricist and bass player, Faeces Christ, explains

“It’s an atmosphere..a stench in the air...it puts people in the mood to make the experience as horrible as the music sounds. It really does create far more than standing there in your jeans and t-shirt playing”

Early in their set at Satanfest 2002, Faeces pulled out his surgical scalpel to carve an inverted cross onto his chest. The first incision was clean and a lot less dramatic than he was aiming for.

“It didn’t really hurt at all because it was so sharp”.

So he sliced himself again.

One song later and an unsuccessful attempt at audience participation, Faeces passed out and headed to A&E. After 50-something stitches and some questions about his mental health, the hospital nurse wisely advised, “just...wait until it heals till you do it again.”

The next time Faeces Christ took a trip to the doctor it was after his run-in with a bloody craft knife and rotten sheep head. No scalpels were involved.

LISTEN: Injuring yourself in the pursuit of the perfect sound.