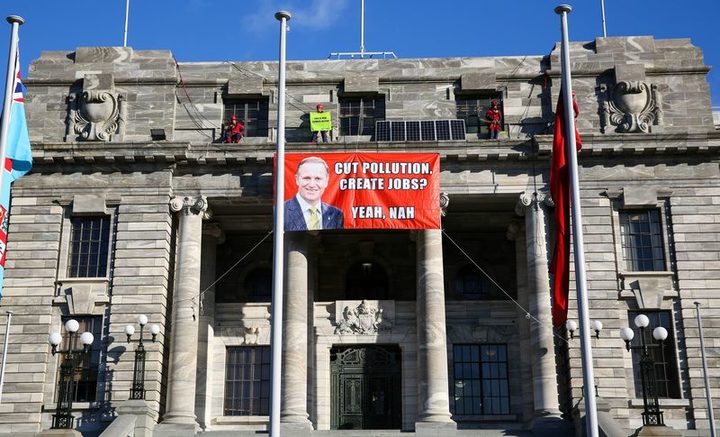 The four Greenpeace protesters who took to the roof of Parliament have been charged with trespassing.

The day-long protest ended at about 5pm yesterday when the Greenpeace members came down of their own accord and were met by police.

“People have been lobbying the Government and we aren't really getting anywhere. There's no clear solution. Our system's still based on fossil fuels.

“Obviously we can see we're having extreme weather events every year. 100 year floods are happening all the time, as you can see in the lower North Island just above where we are now. Then worldwide you can see heat waves in California and in the Middle East killing hundreds of people at the moment.”

The organisation's policy adviser Nathan Argent said the protest was “borne out of frustration” at the Government's continued inaction.

“My job is to speak to the Prime Minister about real climate change action and [the message is] simply not getting through,” he said.

“The government has failed to put any policies in place to stop pollution.”

“Now we are looking at a situation where New Zealand's emissions are spiralling out of control.”

General Manager of Parliamentary Service David Stevenson said a full review of parliamentary security will be carried out as a result of the protest.

Stevenson said while Parliament is frequently a focus for protest, the Greenpeace activists had trespassed and their actions were totally inappropriate.