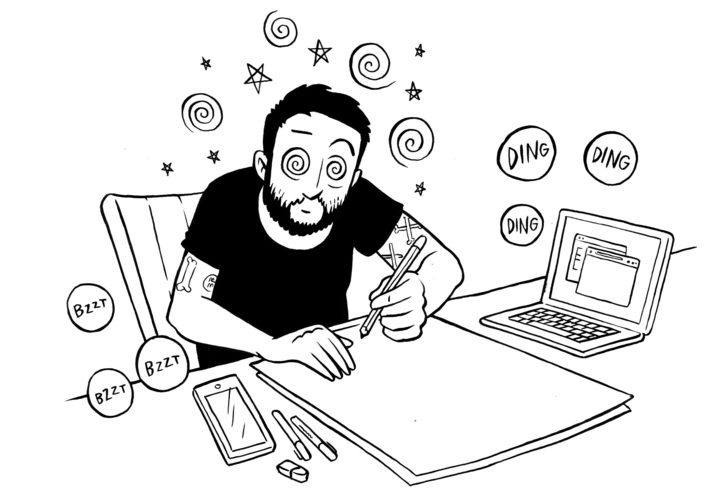 This time last week I was nervous. I was putting the finishing touches on a comic I was working on, and wondering if I’d screwed it up.

It was on a sensitive topic, and I was nervous that people would have very emotional responses. Was I going to really upset some people? On the other hand, I was nervous about the backlash too. Maybe it wasn’t my place to talk about this. But mostly I was nervous no one would be interested, that I was wasting my time.

“On a Plate” is the 10th installment of my Pencilsword series for The Wireless, but drawing these opinion-piece comics still feels very new to me. Usually, I’m a bit of an introvert - an under the radar, “don't make waves” type of guy, so it’s scary to suddenly be putting these personal views out into the world, but what I’ve been starting to realise is that as a middle-class straight white dude, “not messing with the status quo” is actually the easy option. A lazy, selfish option even, because for a lot of people, the status quo really hurts. We can do better. Maybe me making some waves is a good thing.

The Pencilsword #9 was about shining a light onto inequality. It’s a very complicated thing to explain but with the help of my friend Max Rashbrooke I think we found a clear way to visualise the wealth gap for people, and it sparked a lot of conversation in New Zealand. Great!

But it didn’t finish there. Often the conversations that came out of that piece lead to a question: How do the super-wealthy, the 1%, not see inequality as a problem? How do we get them to care? So I started reading and thinking about that.

Right under my nose I found an answer - again and again I saw this line of thinking that we all simply get what we deserve - that the wealthy must have worked hard, and the poor must be lazy, stupid, or both. What a load of shit.

So I wanted to do a piece that challenged that. Not in a preachy way, just in a simple way that let people come to their own conclusions.

Of course in keeping it simple, I had to leave stuff out. After a lot of thought, I decided to not get into racial, gender or sexuality privilege in this one. I thought about making Richard Pakeha and Paula Maori, but in the end I decided that I would be opening up another different can of worms and possibly confusing what I wanted to be a simple piece by introducing a second, extremely loaded topic. I’ve seen people misinterpreting the piece and reading into it that I’m saying “race doesn’t play a part” or “gender doesn’t play a part” but that wasn’t my intention at all.

I think the assumptions we make about people, and people make about us, play a massive part. There are all sorts of advantages or disadvantages we face based on our race and gender (And our religion, our sexuality etc, etc) but those are big topics to jump into another day.

Luckily, the Pencilsword is a monthly piece, because there is a lot to talk about. For this one, I wanted to pull it back to something very simple. I just wanted to start a conversation, to get people thinking.

And man, did that work. The piece has spread wider than I ever imagined and has been read now by hundreds of thousands of people. I’ve been swamped with messages from Kiwis but also from all over the world -Mexico, the UK, France, India, Canada, Thailand, Portugal, Argentina and the US.

People have been offering or asking me to translate it into all sorts of languages. I’ve had several people wanting to make it into a short film. It’s been on the front page of Reddit, posted on Boing Boing and I suddenly have whole lot of new Twitter followers - what’s up guys!

I want to take the opportunity to thank everyone who has shared it, and The Wireless for giving it a home - I seriously appreciate it. I wrote it, but you guys spread it. Thanks. To be honest, the response been very overwhelming and impossible to properly comprehend.

Sure, some people took exception and I’ve been called everything from a “filthy communist” to a “n***** loving moron” along the way (yeah, seriously), but the good feedback has by far outweighed the bad. It’s been humbling to see how people have connected with it - People have contacted me saying they’re Richards and the comic has made them rethink their attitudes towards poverty, and I’ve heard from lots of people who identify with Paula who have found the piece empowering.

Me? I’m somewhere in the middle. Maybe you are too. I moved around a lot as a kid and went to some high decile schools, and some low decile ones. I’ve got friends who are Richards and friends who are Paulas, and what I’m finding is that the reaction and reception to the story affirms what I was trying to say in the piece all along: In the end we’re all the same, we just don’t always have same chances in life. Pretty simple.

In Mumbai, in Denver, in Nantes and in Wellington it rings true. The fact that the story has been received so voraciously around the world only strengthens my belief that what I’m saying has truth in it.

I feel pretty daunted as to what to write next, (and realistic about my chances of getting such an audience again!) but massively encouraged too. I’m not saying I have all the answers, but talking about things has to be a good start, right?