A few months ago, Hamda Barkhad decided to put on a niqab for the first time.

“People on the street and in shops would stop dead and stare at me as if I was something that had descended from Mars.”

The 21-year-old student usually wears a hijab but the niqab is a step up, covering most of the face with just a narrow opening for the eyes. Hamda says while it isn’t compulsory in Islam, she’s always wanted to wear it. 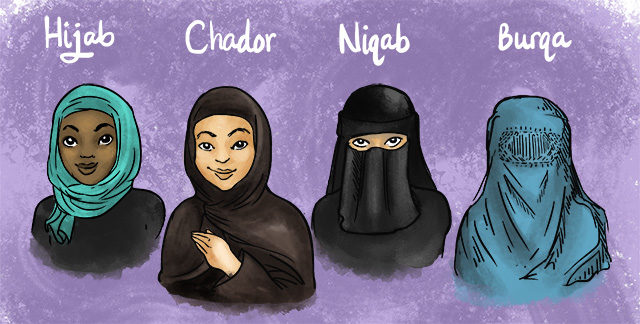 “It was really hard. I will probably never do it in a Western country again.”

Hamda, an Ethiopian-born Somalian, moved to New Zealand in 2004. Her three sisters, aunty and grandma live here, but Hamda is the only one in her family who wears the Islamic head covering.

Even her family have asked why she wears the hijab in New Zealand, worrying that she might be judged. For Hamda that doesn’t matter. Islam does.

As the world’s second largest religion, Islam has close to 1.6 billion followers with nearly two thirds living in the Asia-Pacific region.

According to the Ministry of Social Development, Muslims are the fastest growing religious group in New Zealand with a six-fold increase in population between 1991 and 2006. The number of Muslims aged 15-29 grew nearly 50 per cent between 2001 and 2013. 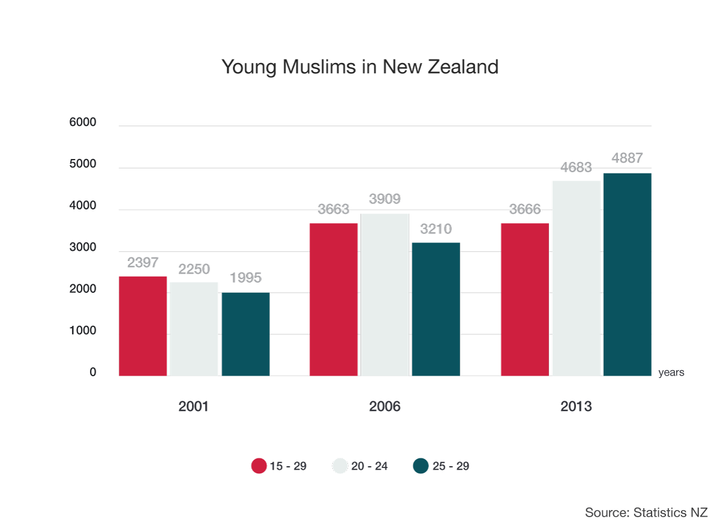 In the latest census just over 46,000 people in New Zealand (about 1 per cent) identified as belonging to Islam, double the number in 2001.

In the wake of recent violence in the West, like the attacks in Paris and the Lindt Café siege in Sydney, the radicalisation of Muslims has become an increasing popular topic.

Some are calling this the “year of terrorism” and even New Zealand, a country usually far removed from the politics of terror, has become intimately involved.

Late last year, Parliament quickly passed anti-terrorism legislation in a bid to intercept Kiwis joining foreign terrorist organisations and last month, John Key announced the country would join the fight against IS by sending about 140 troops to Iraq.

Young followers of Islam are commonly considered the most vulnerable to radicalisation. As more accounts emerge of youth enticed by extremism, being a young Muslim today is arguably harder than ever before. 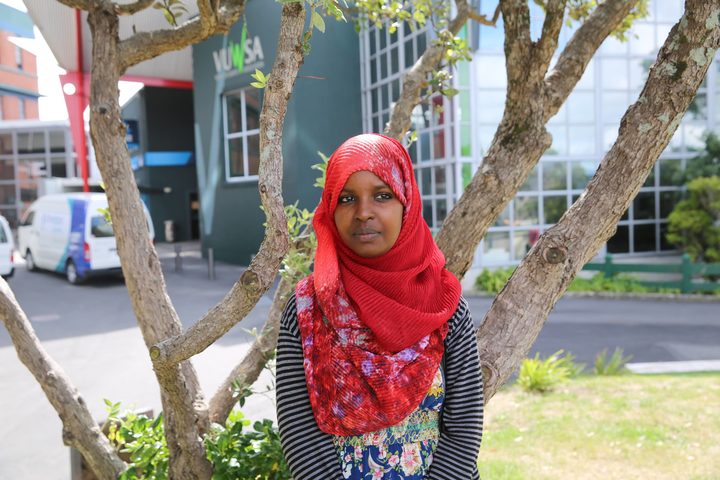 “It’s a massive guilt that’s weighed upon you because of how Muslims are looked at in the world,” says Hamda Barkhad.

“It’s not fair because people are comparing the actions of a few against the values of the religion. I wake and think, please not another news story today.”

THE MOMENT IT ALL CHANGED

For many Muslims the 9/11 attacks over 13 years ago triggered a shift in attitudes towards them and their faith.

Research has shown spikes in religious discrimination towards Muslims in Britain and America and Mukseet Bashir, a 23-year-old Aucklander, says there was a change in New Zealand, too.

“I was in primary school when it happened but kids still pick up on these things and a few started giving me shit and hassling me. I got in a few fights,” he says.

“I was just a brown face with a Muslim name. At that young age, you can’t really comprehend what the problem is and why people are pinning the issue on you.”

A Brunei-born Bengali, Mukseet moved to New Zealand when he was five. He still remembers when his family’s mosque in Ranui, as well as five others in Auckland, were vandalised after the 2005 London bombings.

“They smashed some windows and someone tagged it with stuff like ‘go back to your country’. That was probably one of the first times I felt excluded, like I wasn’t wanted here at all.”

In New Zealand, a country that prides itself on multiculturalism and diversity, do Muslims really face more discrimination?

She was part of a team looking into prejudice in New Zealand by asking Kiwis to rate how they felt towards different religious and ethnic groups.

“We’re symbolically fine with multiculturalism,” she says, “but we don’t like realistic multiculturalism because that means representation and equal opportunity and then that encroaches on our own.” 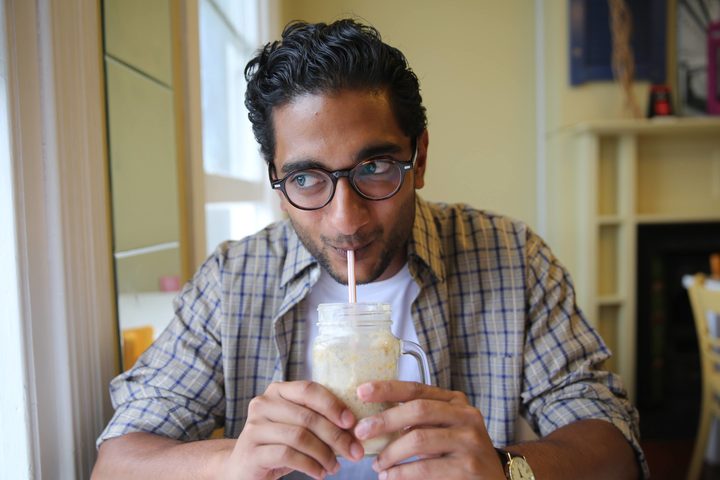 Stuart says the 2009 Victoria University study, which hasn’t yet been published, found that New Zelanders rated Muslims lower out of all religious groups and Muslim-majority nations lower than all other nations.

Mukseet considers himself a proud Kiwi but knows what it’s like to feel unwelcome. He thinks the discrimination young Muslims face worldwide is a contributing factor of the growing accounts of radicalisation.

“All these people are often immigrants, children of immigrants, marginalised by the society that they live in,” he says.

“IS and all these other groups are essentially just a gang. It’s just Crips or Bloods or whatever, just in another country. The comradery, brotherhood and feeling like you’re part of something bigger is attractive especially when you’re marginalised by society and the otherness becomes overwhelming.”

A PIECE THAT DOESN’T FIT THE PUZZLE

Dr Jaimee Stuart spent years researching the experiences of Muslim youth in New Zealand and says while most immigrants have the challenge of grappling with the values the family’s culture and the culture of their new country, Muslim youth have an added layer of complexity: their ethno-religious identity.

“This other layer is predicated on moral values and these you can’t expect people to change - they’re really deeply about how they want to live their lives. Somehow young Muslims have to manage those three sets of values. It’s hard enough having to manage one.”

Rana Ghumkhor’s family moved from Afghanistan to South Auckland in the 1980s. She’s the only one in her family born in New Zealand.

“He was a new immigrant and hadn’t spent that much time in New Zealand. His family came from a warzone [Afghanistan]. He didn’t die there, he died here.”

The 26-year-old speaks with conviction about her experiences as a young Muslim and says despite being bullied, especially after the attack on the Twin Towers, she knows it’s just a few bad apples.

“I could lump every Kiwi together as racist but I’m intelligent enough to know that it’s just ignorant to lump everybody together as anything.”

Rana has never been to Afghanistan and New Zealand is her home, but there are bits of the culture she doesn’t connect with.

She says she’s seen the worst effects of drinking when her 19-year-old relative, Ahmad Azimi, was killed by a drunk driver in 2005.

“He was a new immigrant and hadn’t spent that much time in New Zealand. His family came from a warzone [Afghanistan]. He didn’t die there, he died here.”

“What the project found is that young immigrants are doing really well. The study actually found that across all the religious groups, Muslim youth were doing better than the rest.”

The success in adaption of young Muslims around the world in somewhat in odds with the images presented to us in the media, something Stuart believes is creating unfounded fear.

“If all you ever see is a picture of a Muslim person on TV with a headline saying “terrorist”, what are you going to think when you see a Muslim on the street? We tend to take what we hear from international media and apply that to our lives without really understanding what going on for others.”

Auckland Journalist Mohamed Hassan agrees, saying the way Islam is represented has created a “deep mistrust of the media” within Muslim communities worldwide. 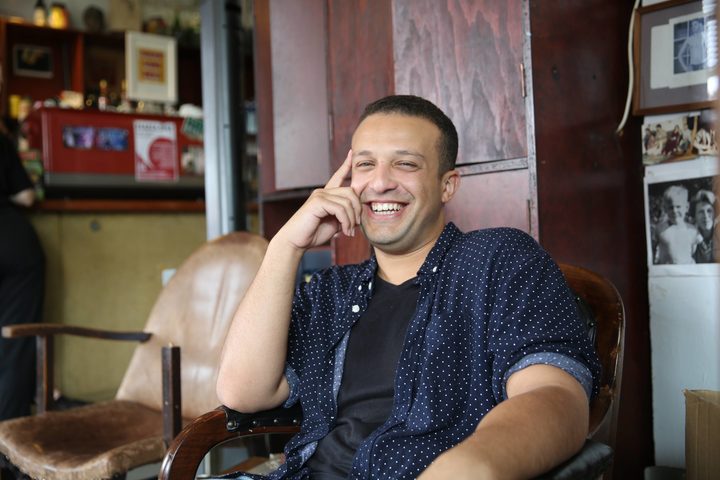 “I think a big part of the reason I decided to become a journalist was the feeling that I want to be able to represent my community in a field where I think we’re being fundamentally misrepresented,” he says.

The 26-year-old was born in Egypt and moved to Auckland when he was eight. “I’ve grown up in a family where our Islamic beliefs are core to who we are. It’s the way we see ourselves and what we use to navigate through the world.”

One of the effects of negative representation is that Mohamed sees young Muslims self-censor what they say, especially online, as a way to avoid “pissing people off” or looking like the bad guy.

“Every time an act of violence or terrorism happens, the first response from Muslims is that we’re out there condemning it, saying that we’re peaceful Muslims, but who is that actually helping?

“All it does really is reinforce the idea that we have something to apologise for. It does nothing to deconstruct the narrative about why people think Muslims are dangerous.”

ISIS: “THEY’VE MADE OUR LIVES A LIVING HELL”

Hela Rahman, a 24-year-old with an easy laugh, says dealing with the negative perceptions of her religion has been challenging.

WATCH: You’re a Kiwi if you want to be

Hela, who works as a debt collector in Auckland, was born in Iraq just before the Gulf War. She moved with her family to New Zealand in 1995 but still feels connected to the Middle East.

“I suffer as much as anyone does from ISIS because my family live in Iraq. They absolutely hate ISIS because they’ve made our lives a living hell.”

Hela hears her parents crying on the phone talking to relatives overseas, but she feels people don’t see Muslims as victims. 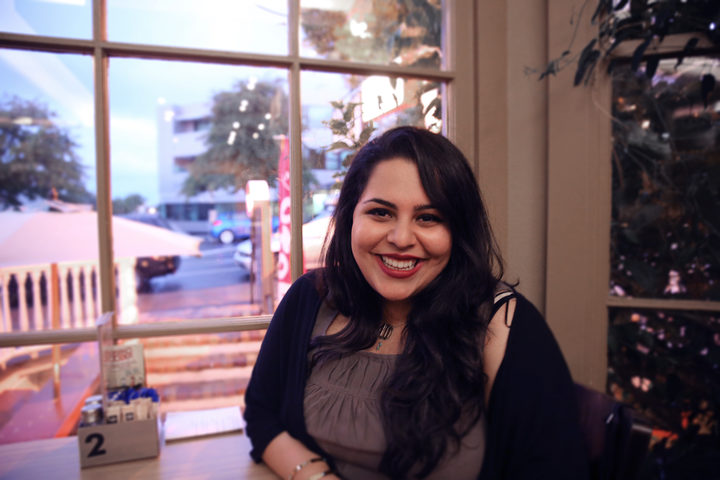 The Government’s decision to send troops to Iraq has left a sour taste in Hela’s mouth. She doesn’t believe Kiwi soldiers can do anything more to help the delicate situation in her home country.

“It’s not about getting ‘some guts’ and joining ‘the right side’ as he put it, it’s just about John Key getting his brownie points.”

New Zealand is following international trends with a growing community of Muslims. By 2030, it’s estimated [PDF] over 100,000 people (2 per cent of the population) will be followers of Islam.

“In general, larger communities are more threatening and so it’s more likely there will be more discrimination against those groups,” says Dr Jaimee Stuart. “You see the same thing happening with the Asian communities, particularly in the way people talk about Auckland now.”

To do that, New Zealand needs to close the gap between the symbolic ideals of multiculturalism and how we behave both personally and as a country.

“I don’t know what I can do to change that view of Islam other than through my own actions and trying to do my best to help people.”