It was a bizarre election. Looking back now, Eminem, Edward Snowden and “^%$# John Key” have all blurred. The hashtag for the whole thing could just have been #wtf. But it was also the election that saw unprecedented attempts to get out the youth vote.

They may have had some impact. While detailed data analysis is yet to happen, Victoria University’s Professor Jack Vowles says there was an increase by about 5-8 per cent in voting by those aged between 18 and 29. That’s probably a slightly bigger increase than the general population.

However, it’s not necessarily all great news. Even with an increase, more than half of all people under 30 didn’t vote. And while the 2014 election is not as bad as 2011, it’s still the second worst turnout in a New Zealand election since the advent of universal suffrage.

Still, given declining turnout has been an international trend for decades, even a tiny increase is meaningful.

Professor Vowles says one reason behind the increase might be the focus on turnout in the past few years. It might also have been down to the greater availability in advanced voting.

“There was more activity on the ground. Certainly the Labour Party had a turnout strategy. And National too was trying to maximise turnout in its areas of strength.

“Not just on the part of the political parties, but other groups particularly youth groups …To some extent, that’s probably had an effect. How much, it’s hard to say.” 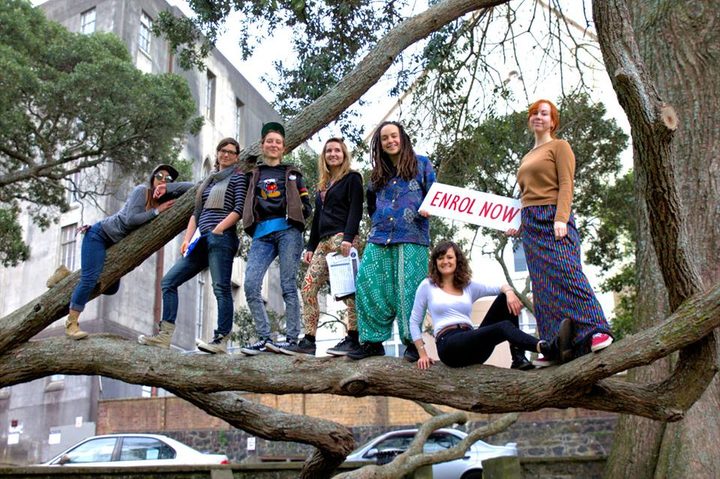 One of those groups was RockEnrol, which was part of the Virgin Voter Collective. Its founder, Laura O’Connell-Rapira says for an organisation that came along four months out from an election and was “making it up as [they went] along”, they had huge ambitions.

Back in June, she told The Wireless the aim was to increase youth voter turnout by 13 per cent – or about 130,000 people. She admits now that was overly ambitious, especially with a budget of about $10,000.

But the organisation did sign up 2000 people, 98 per cent of whom said they did vote. (Based on an internet survey of about 600 of those who agreed to enrol.) “It’s really awesome to have the chance post-election to have some space and look at those results and a conversation about what we can do better. Because we still want to be here in 2017 with more lead-in time and more experience.”

Laura says to reverse the declining vote will take more than four months. “To really get that deep understanding and for young people to feel like they have a sense of agency over the decisions that affect their lives, that’s going to take a little bit longer.”

Youth Affairs Minister Nikki Kaye won her Auckland seat by just 600 votes. About 30 per cent of people under 30 in her electorate didn’t vote. That’s more than 2500 votes that could have shored up support or changed the result.

She says having a group of people that isn’t necessarily connected with the Government to convince people to get out to vote, and why they should vote, is powerful.

“It really is about convincing young people that their vote is going to make a difference, and that they absolutely have a right to vote, and that they don’t have to know absolutely everything about parliament to be able to do that.”

Kaye cites this year’s advance voting as a success. More than 700,000 people voted prior to Election Day, especially on campuses. “I personally saw some of the queues that were happening there. So I think that’s a really good initiative from the Electoral Commission.”

She says people tell her that while working and studying, the convenience of being able to vote early was huge.

But even with advanced voting, new advertising campaigns (including Lorde herself) and numerous voter education efforts, that small increase in voter turnout is “nothing to get excited about”, says Professor Vowles.

Internet Party candidate Miriam Pierard says the onus has to be on politicians and political parties, not groups like RockEnrol and the unions.

READ: “They say people need a little bit of religion to get religion – it’s the same with passion, and hers is contagious.” Elle hunt profiles Miriam Pierard.

“If political parties were more in touch with young people especially, in a much more meaningful way, then perhaps the job of external organisations wouldn’t be so big.

“That’s what attracted me originally to the Internet Party. Because it was the only party that was really purposefully and meaningfully engaging with young people. Parties need to make voting interesting.”

Does she still think that after the Internet Party’s failed to get into Parliament?

“I do believe we raised many important questions and started new ways of communicating with people. Even though were soundly defeated, I think we did bring up some important things that can be continued.

Green Party MP Gareth Hughes agrees that politicians need to step up. He says political culture is turning people off. “MPs need to take responsibility. This is our democracy after all. I think the media has an important role.

“Behind the scenes most of our politicians get on really well. I even play rugby with them, and enjoy a beer with them. But people don’t see it. Unfortunately, it looks like we’ve got into a bit of a vicious cycle with the media, it’s these petty point scoring stories … that’s what politicians are providing.”

Hughes gives credit to the work of organisations like RockEnrol, and says they need to continue to be supported. “We need to be looking at things like investigating lowering the voting age to 16. The advance voting was a real success this election. That could do with a lot more promotion and education next time.”

Then, he says, we could also look at “meatier” initiatives like civics education and online voting. (The Government has committed to a trial of online voting for the 2016 local government elections, though there have been mixed results overseas.)

I actually believe we have more of an opportunity than ever, with social media, with the kind of campaigns that many young people are actually politically participating in, but they don’t translate that to voting.

Professor Vowles says lowering the voting age could work, if it’s lowered to the point where those who become eligible to vote for the first time are still at school, and there is a much more comprehensive programme of civic education.

Plus, Miriam Pierard asks, what is civic duty? “This generation is still very interested and participate in society and politics, in a very active sense. But they don’t necessarily see voting as the be all and end all. That term apathy is bandied about our generation, but it’s really not representative.”

Education shouldn’t just be about “this is what the electoral process is about” she says, people need to be taught what’s going on beyond the ballot box.

Nikki Kaye agrees: “There are a lot of young people that don’t see the correlation between them casting their vote and making a difference. I actually believe we have more of an opportunity than ever, with social media, with the kind of campaigns that many young people are actually politically participating in, but they don’t translate that to voting.

But Pierard points out that it is still rare for parties to have young people involved in policy development – especially outside of youth wings. And Laura O’Connell Rapira says there are not many policies that are directed at young people that young people actually have a say in.

Kaye says young people will vote if there’s a particular issue that is close to their heart. “Whether that’s housing affordability or education, we need to keep talking about the issues that matter to young people.”

Listen: Megan Whelan and Elle Hunt examine efforts to get out the youth vote and ask is it apathy or something else?

She points to Parliament live-streaming select committees as a way to show collaboration across the house, and agrees that politicians need to find more ways to demonstrate that. Professor Vowles says that while collaboration might give people confidence in the process, it might not get them out to vote. “It’s actually differences between the political parties that matter to people. That engages people to want to go into the voting booth.”

That’s a pretty fine balance to strike: teaching people that what happens inside the Beehive is relevant, sensible and important, while at the same time constantly highlighting the differences between parties and policies.

The Virgin Voter Collective wants to start doing that by encouraging people to make submissions to the Justice and Electoral Select Committee which is inquiring into the 2014 general election. They’ll make submissions on things like online voting, compulsory voting, and lowering the voting age.

Laura O’Connell Rapira says she’s interested in looking at how we can provide systems and platforms in which people can engage with decision-makers more regularly. “Every three years, candidates get out there, and they go to universities, and they go to dorms, and they go and speak to the young people, but other than that, we don’t get to see them face to face.”

Submissions to the Select Committee close at the end of March, and you can find more information at the Parliament website.