Filipino journalist Norman Zafra, who has been based in Wellington for the past two years, returns home to report on the rebuild after Supertyphoon Haiyan.

News Doco: Typhoon Haiyan - One year after from Norman Zafra on Vimeo.

Over 16 hours on November 8, 2013, Haiyan battered the Philippines. More than 6000 people were killed and 4 million people were displaced – equivalent to almost the entire population of New Zealand.

The country was paralysed, with people starving and grief-stricken.

A year on, the Philippines is facing the most ambitious resettlement project in recent history – relocating more than 200,000 families to safer ground.

But money is not enough to solve the problem.

A majority of the homeless families have returned and rebuilt their makeshift homes in coastal areas declared as “no-build” zones while an estimated 15,000 people are still living in tents and temporary shelters.

About this time last year, my eyes were glued to the internet learning about the devastation.

For days my social media newsfeed was bombarded with images and footage of shattered houses, grieving family members, bodies in cadaver bags, and people escaping towns and cities.

My heart was broken. Eight thousand kilometres away in New Zealand, I deeply felt the sorrow and grief of my homeland and countrymen.

A year later, I returned home to report on the recovery of the Philippines. But as a Filipino myself who feels directly connected with my subjects, it feels like the journey going home also became personal.

This was my first time in Guiuan, located in the southern tip of Eastern Samar, the coastal town that experienced Haiyan’s first landfall. All of its nearly 12,000 houses, mostly in villages near the coastline, suffered damage.

The small and quiet fishing town of almost 50,000 people lies in what is known as the “eastern gateway” to the Philippines, facing the Pacific Ocean. The people knew Haiyan was a strong typhoon but no one foresaw the disaster that would unfold. 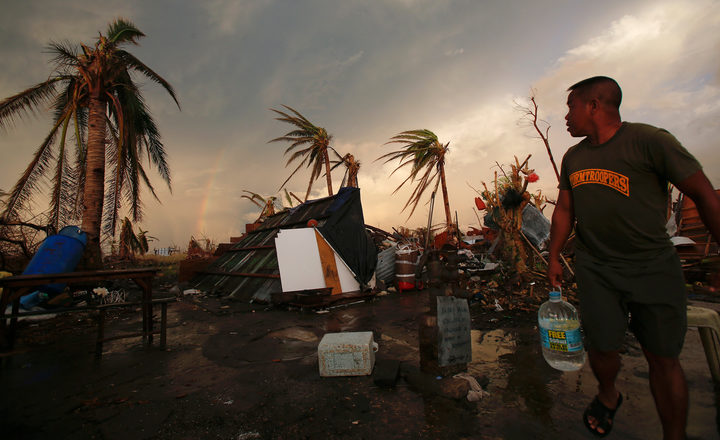 The makeshift home of a family in Guiuan after Typhoon Haiyan struck in November last year. Photo: Reuters

On my first morning in Guiuan, I approached Aljonpaul Sabas, 19, while watching the flow of people and vehicle traffic from the upper floor window of the pension house where I stayed. He was taking a break from his housekeeping job.

Sabas is about 5’6 tall, thin and soft-spoken, but seems mature despite his young age. He recalls Haiyan as a horrifying experience. The strong wind ripped roofs off the houses – flying around his village like thin papers in the air.

White clouds enveloped his town and their ears hurt due to low pressure.

“We tied ourselves together so if we die during that time, our relatives will be able to find us all easily,” he says in Filipino. “I used the wire, extension wire.”

He says 15 people in his village alone died as a result of the disaster. He and his grandparents survived, but their house was washed away. It took three days before relief reached their town.

“We first ate coconut, then bananas. Then we saw some chickens, pigs and cows that were washed in by the floods; we butchered and cooked them right away so we can have food,” he says.

Nine days after landfall, Sabas escaped on a C130 cargo plane flown in by the army. When he returned two months later the scene of devastation appeared almost untouched.

As I walked further into town, I saw signs of normalcy. Some of the businesses had reopened, classes were open at public schools and the town was slowly coming back to life.

Hundreds of families were still living in temporary shelters. Many people asked what was hampering the relocation process?

With an average of 20 tropical cyclones each year that hit the country, Filipinos have practiced the art of resilience to natural calamities.

In the aftermath of Haiyan, homemade signboards bearing the phrase “homeless but not hopeless” were hung in the midst of devastated villages. People were determined to survive and rise once again.

But after living in a donated tent in the so called “tent city” with more than 100 families, Rosemarie dela Cruz, 39, says hope also diminished at times.

Most survivors living in tents had to endure the heat during sunny days or leaking roofs during wet season.

“The most difficult time is whenever it rains, the water would come inside the tents. Our stuff becomes wet and it feels like we’re lying on waterbeds,” she says in Filipino.

Not all displaced families in Guiuan are living in temporary shelters; others have opted to reconstruct their makeshift homes along the coastline, closer to their fishing livelihood.

“We do think of returning back to our village but we don’t have money to fix our damaged house,” de la Cruz says.

As early as April this year, Guiuan has received funding assistance from various donors to build transitional shelters. But even though local authorities would want to immediately begin construction, the absence of land ready for development delayed the relocation process.

It is only this month that a transitional housing for Guiuan tent-dwellers was completed and handed over to typhoon survivors.

Guiuan authorities say the delay was due to the need to do land survey which they had to course through another government department.

Most affected regions in the country face the same problem of relocation. One hundred and forty kilometers west of Guiuan, the city of Tacloban is facing a more challenging situation. 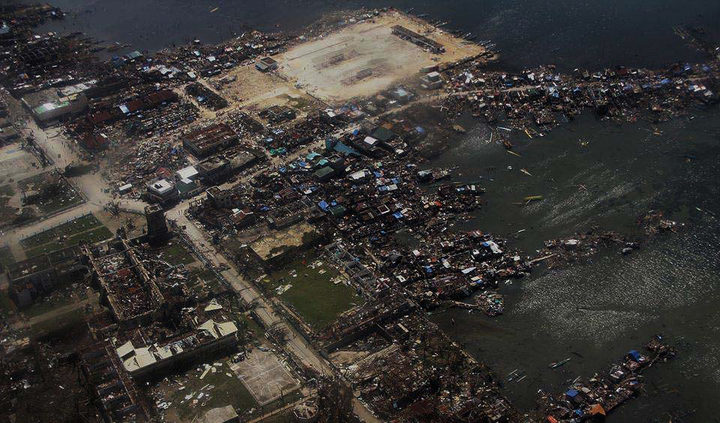 A view from the air of Guiuan two days after the typhoon struck. Photo: Armed Forces of the Philippines

EMERGING FROM A STATE OF SHOCK

Tacloban suffered more than 2000 deaths from the typhoon and had the worst damage to infrastructure of the nine areas struck. In the days after the storm, mass graves and disposal sites were kept full one day after another. Bloated and often faceless corpses were everywhere, piling up on streets and local morgues.

The struggle to find food and shelter was physically exhausting and yet the pain of people searching for their missing loved ones was far more emotionally draining.

Apart from the traces of damaged buildings and abandoned houses and the narratives of misery that echo wherever you go, Tacloban City’s centre is gradually getting back on its feet.

The streets are cleaned up. The roads are roaring with the honks and beeps of vehicles – cars, tricycles, jeepneys and multi-cabs.

Traffic was heavy approaching the rush hour and pedestrians got easily crowded. I felt every blast of warm air as I walked the pavement. Some stores and local malls had reopened.

On Padre Burgos St, foreign aid workers, volunteers and locals alike found a hang out place when a mobile bar called Na Ning appeared in the street just two months after the disaster.

Some refer to it as Tacloban’s “pop-up bar”. It serves local and foreign drinks using a mobile truck. In a way, it started the post-disaster nightlife in city.

It is the portrait of recovery that is easy to describe, the city of restoration captured not only through physical but also emotional recovery.

But the face of post-disaster Philippines is always two-fold, one that highlights the economic divide between the upper class survivors who are able to recuperate by themselves and the homeless who rely on aid to recover.

From downtown Tacloban, I took a 30-minute tricycle ride to reach one of the transitional housing sites where displaced Haiyan survivors temporarily dwell.

The houses are fine identical nipa huts built out of bamboo matting and coconut lumber.

Jennifer Vasquez, 34, warmly welcomed me to her housing unit and offered me a homemade coconut candy she sells.

She and her five children were in a neighboring Samar province when the storm surge hit their coastal village. Vasquez is thankful her husband and two other children survived the surge but she came back homeless and their possessions were swept away.

“I returned to Tacloban with my child on November 12. Dead bodies were still piled in the streets. I could not stand the smell,” she says in Filipino. That time, Vasquez was also searching for her mother who was gone missing since the storm surge. They never found the body and she says it left the family in persistent grief.

“I keep thinking that she will soon return to us. But then I said, if she survived (the storm surge), she must have showed up already,” she says teary-eyed.

Apart from being relocated away from their fishing livelihood, Vasquez is fortunate for getting a unit in the transitional site. In Tacloban alone, 353 families are still living in tents.

On a 5 hectare block of land near Vasquez’s transitional house, I walked through an ongoing construction of permanent resettlement donated by a non-government organisation.

From a distance, I heard the roar of trucks transporting cements and heavy metals, hammers pounding in nails and shovels scraping against concrete.

It was a busy working day. I learned that most of these builders are not only construction workers but also household heads whose families would soon occupy some units. It is a tangible solution to the post-disaster settlement problem in Tacloban. However, this housing project is only good for 400 families.

But Vice Mayor Jerry Yaokasin admits it could take years before they reach their target.

“It is always never fast enough, it is a massive relocation and you are moving from one end to the other end of the city.” says Yaokasin. “It is not just shelter that you are building but a whole new township.”

The availability of land is a major stumbling block. They need 144 hectares of land for permanent resettlement but less than 30 hectares are currently available.

“There’s one land that we wanted to expropriate now but we found out that many are claiming that piece of land,” Yaokasin adds.

On a national level, out of the 205,128 target permanent houses, 7,377 are undergoing land development and construction but only 1,252 units have been completed.

Architect and urban planner Amillah Rodil says although a disaster illuminates the housing issues in the country, it also opens an opportunity for redevelopment.

But preparation is key. Land inventory and acquisition is a kind of work that local government units (LGU) in the country must do as part of their regular functions.

“Imagine you have donors offering you 10,000 units of housing. If an LGU was able to land bank, and you have a site ready for development, it speeds up the process,” says Rodil who also served as consultant in Tacloban for UN-Habitat.

The difficulty of finding suitable land for public housing projects in the Philippines is not just a consequence of a major disaster but is deep-rooted. Solving it is never easy.

Apart from outdated land laws, cadastral survey is inadequate in the country, causing the inability of many LGUs to provide information on land ownership, boundaries and actual use, a report by Food and Agriculture Organisation states.

It creates a domino effect – no land, no housing project.

“Land ownership in the Philippines is driven by private interest so it is difficult to use a land for public project,” Rodil says. We have to recognise that it takes time; in the meantime, they have to meet the humanitarian needs of the people.”