Fern Seto and Saziah Bashir have experienced both growing up Kiwi and being “othered” in New Zealand in very different ways, but share an outsider’s understanding of whiteness here. In this year’s election, they’ve tried and failed to see themselves adequately represented in New Zealand’s democracy. Here they reflect on how this affects their sense of identity – both as Kiwis and as voters.

This year’s voter registration campaign declares that “my vote is worth as much as yours” – an empty statement for many people of colour in New Zealand, who, unlike Pakeha, cannot elect anyone representing their background, culture or issues. One undisputed common factor across all party lines is a lack of non-white representation, even in the most diverse electorates.

I grew up in one such electorate, Mt Roskill. Yet the only MP I’ve known is the very Pakeha Phil Goff. The majority of my friends and classmates were like me - New Zealand born children of immigrants, attracted to New Zealand for its various opportunities. My parents arrived here in the 1970s, my father being the only Asian in his sixth form year, sent here by their families for a better education. They never went “home”.

I now reside in the Tamaki electorate, held by white, male, National MPs since the 1960s. Of all the billboards I regularly pass, I recall only two non-white faces - Parmjeet Parmar standing for National in Mt Roskill, and Kenneth Wang, Deputy Leader of the Act Party (I had to look up his name, dwarfed as it is by the “Tough on Crime” strapline dominating his billboards). That the selection of candidates across New Zealand’s largest and most diverse city is so whitewashed speaks volumes about the culturally representative value of Parliament.

There is, of course, no difference between white and non-white votes, nor their rights to stand for election. Why then, in a city where the most common surname is now Wang, are so few non-white candidates standing?

READ Sonia Sly on the insidious influence of racism in New Zealand.

Firstly, consider the obvious issue across all immigrant communities:  language barriers. Although voter registration papers are mailed out in a number of languages, re-enrolment forms are in English only. When the simple mechanics of participating in democratic process pass you by, your voice is immediately diminished. More fundamentally, from an East Asian perspective, adding your two yen to public debates clashes directly with cultural norms, which ingrain deference to authority, and compel us to avoid “losing face”. Combine that with a tendency to encourage success via achievements and accolades, rather than the relationship building and networking skills so key to success in politics, and you have the perfect anti-candidate.

The reasoning behind East Asian parents encouraging objective and quantifiable measures of success may be a product both of cultural nature and nurture. Arthur Chu writes of his father encouraging him to take an “Asian” job;  to avoid careers where success was “purely based on how well people could relate to me, like direct sales, like middle management, like the performing arts.” Like politics. This is not merely a casual dismissal of political participation; it is a bitterly learned lesson on how white-run institutions would never value - let alone need - a contribution from non-white communities.

So how does a firm cultural education in not causing a fuss sit with first generation immigrants raised in a society encouraging them to speak out? Whether attending pro-Gaza rallies, or live-tweeting a leaders’ debate, first generation immigrants growing up and voting in New Zealand are more articulate than ever. Asian communities in particular are widely regarded as New Zealand’s “model minority”, with high rates of business and, controversially, home ownership. We are perfectly placed to engage in civic and democratic life in New Zealand, and yet the faces of power remain overwhelmingly white. 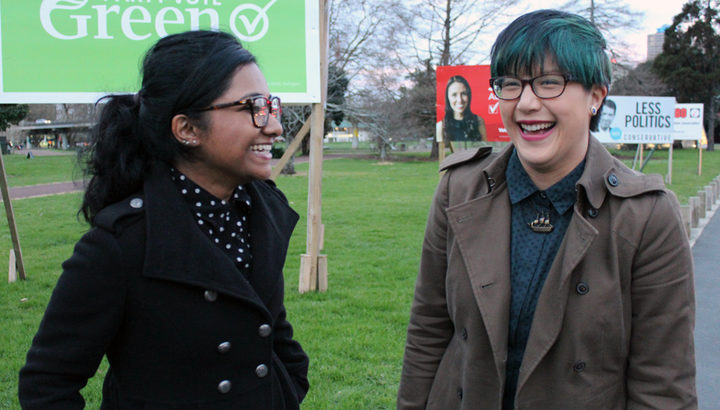 I found myself feeling invisible once again as billboards for this year’s elections began appearing at Auckland’s busy intersections and main roads. Invisible, because the less you see yourself reflected in the imagery that society consumes every day - magazines, TV shows, film and advertising - the less tangibly you feel your own presence within that society. A South Asian face pops up only on occasion, and I’m reduced to feeling like a novelty or a ghost.

WATCH our video series on the challenges and opportunities presented to refugees who made the move to New Zealand.

My Bengali parents were perpetual migrants, moving wherever my father’s engineering work would lead.  I have happily called New Zealand home since I was 11 years old. Yet my experiences have striking similarities to those of someone like Fern, born here to East Asian parents. New Zealand should feel like “home” for both of us but because of the way we look, we’re often asked, directly or indirectly, to prove our claim. Thus we share an outsider understanding of whiteness in New Zealand – in particular of its exclusionary power. Overwhelmingly for us, whiteness has been the gatekeeper to institutions of power in New Zealand, more than any other factor such as age or gender. Perhaps never more often than in an election year, I’m reminded time and time again that my claim to the place I call home is somewhat tentative in others’ eyes, simply because of my race.

Perhaps never more often than in an election year, I’m reminded time and time again that my claim to the place I call home is somewhat tentative in others’ eyes, simply because of my race

I set myself the unenviable task of scanning party websites to find anyone who reflected my background. I trudged through plenty of questionable web design before I had any luck: Priyanca Radhakrishnan and Anjum Rahman, list candidates for Labour. National and Internet-Mana each presented one South Asian woman candidate, Parmjeet Parmar and Roshni Sami respectively. Four such women may sound ample, but in proportion to the on-the-ground reality of Sandringham Road or Stoddard Road, it’s absurdly low.

Even in my “hood” of Massey in West Auckland (the Upper Harbour electorate) the number feels woefully inadequate. Indian takeaways and eyebrow threading are commonplace, but South Asian women in politics are not. Interesting, considering women are heavily engaged in politics in South Asia, with Bangladesh, India, Sri Lanka and even Pakistan boasting startling stats such as the first female heads of state in the world. Each of these nations elected female prime ministers long before New Zealand’s Jenny Shipley.

Race remains a barrier to joining civil institutions – not insurmountable, but formidable enough to discourage many nonetheless. South Asian migrants and their children are encouraged to toe the  “Good Immigrant” line: stay in school, go to university, get a good job or own a business, buy a house, keep your head down. We become academics, doctors, engineers, accountants. I remember clearly the bemused expression on the faces of all of my parents’ friends when I told them I was studying law. Their faces silently said “you’ll never make it into their old [white] boys’ club,” though audibly they only wished me luck.

WATCH Mothla Majeed share her experience of being “othered” in New Zealand.

Along with cultural expectations of behaviour rooted in notions of propriety and shame, this “why bother?” attitude stems from an awareness that all South Asians are painted with the same brush: “Indian” harmlessly, “Curry” more scathingly, and most accurately “Other”. We suffer from a crippling homogeneity applied to us by white and other New Zealanders, which we do not subscribe to ourselves. Meaningful social and political engagement is frustrating when explaining what and where Bangladesh is, and no it’s not a part of India, becomes a prerequisite to engaging at all.

Never having our identities fully understood or acknowledged prevents us from feeling that our voices could be truly represented or valued. It should not be enough for me that Anjum Rahman is a woman of colour of South Asian descent who is (bonus!) Muslim. On top of that, I should be able to shop around for candidates who also support policies and feel passionately about the same issues as I do. But that is a luxury I am not yet afforded.

Voting is an inherently personal process, and we are privileged in New Zealand to be able to vote safely for whomever we please, for whatever reasons. However, as long as New Zealand’s governing institutions remain mostly white, and as long as the parties running offer mostly white candidates to choose from, non-white New Zealanders are not going to feel truly represented. Members of ethnic communities have to step forward and participate, but this will only happen once institutions truly open their doors to candidates of colour through real cultural education and dialogue, and a refusal to be satisfied by tokenism. Meaningful representation is, after all, a cornerstone of democracy.