Auckland is a city in flux. A big city that wants to be a global city; a good city that wants to be a great city. Periods of panicked development in the lead-up to major events have failed to spark the change Aucklanders expected, but in the last few years, a small number of developers,  architects and designers have begun an unprecedented transformation of Auckland, pulling its energy away from the suburbs and towards the waterfront. One of the people behind the look and feel of that transformation is Nat Cheshire of Cheshire Architects, the studio he runs with his father Pip.

Cheshire is an architectural evangelist. Born in Auckland, he spent his youth in the basement spacey-parlours around the downtown wasteland that is now the home of his most public accomplishment, the Pavilions at Britomart. Cheshire, who admits to hating the Auckland he grew up in, has developed a monastic faith in city’s future and his own ability to shape it. As we sit in Ortolana, looking out on the Pavilions, I’m being converted by his sermon.

When speaking, Cheshire intensifies not by raising his voice but by softening it, leaning in as if to tell you a secret. While in photos he can look almost too impeccable, like a fastidious automaton, constructed solely to provide design magazines with content, in person, Cheshire has a gentle charisma, is sharp but dishevelled by his long days and hectic schedule. When I read that he often starts work at 4am, I assumed it was self-mythologising, but a couple of emails from him at 5am quelled my doubts.

It’s all too easy to approach Cheshire with cynicism. The son of a renowned architect, he has had every advantage and seemed to emerge ready-made with a fully-formed career. At 33, Cheshire already has the accomplishments and opportunities the most established architects strive for, but his path hasn’t always been clear. “I hated the idea of architecture,” he says. “I watched my father work unbelievably hard my whole life for something that I just couldn’t even see. Architecture is such an invisible art. He gets so excited about muddy holes in the ground filled with cinder block and I just didn’t understand it.”

engaging with clients means not only the designing buildings, but guiding function and aesthetics at every level.

Rather than follow in his father’s footsteps, his early ambition was to become a painter. Always thinking on a grand scale, after one year at Elam art school, Cheshire began to doubt that painting could shape the culture in the ways he longed to. “The closer I got to painting, the more power I realised lay in architecture,” he says. “Architecture dragged art out of the gallery and thrust it into the city, into the lives of hundreds of thousands of people, and stands some sort of chance of impacting on those lives”.

After a year at Elam, Cheshire moved to Fiji to surf offshore reefs and test the waters of his new ambition by working for an architect part-time.  “When I came back, I worked for another architect here and I read a huge amount and by the end of the year I was just burning for it,” he says. “I realised that the architecture that I had grown up surrounded by was not the sum total of architecture and not nearly even scraping the surface of its potential. And that just got really, really exciting. It seemed like something to commit a whole life to.” Cheshire soon enrolled at the University of Auckland’s School of Architecture, where his father’s work was discussed in the introductory class.

Although he graduated with a degree in architecture, Cheshire is not a registered architect. He calls himself a “Delineator”, an archaic title for a person who draws lines. With little patience for tradition or authority, Cheshire has eschewed the formalities of registration, preferring to focus on his own multidisciplinary approach, a “total architecture”. For Cheshire, engaging with clients means not only the designing buildings, but guiding function and aesthetics at every level.

“When we do a restaurant now, we design the block it sits on, the building the restaurant is housed in. We do the fit out, we make the light fittings, we design the uniforms. We’ll often be involved in the menu at a concept level, we’ll do the naming, the branding and the graphics and build the website.” Cheshire’s role extends from high concept “provocateur” to detailed execution. “I chose the linen you’re sitting on,” he tells me when pressed for an example.

That attention to the micro-detail is exemplified by two 28 square meter cabins in Kaipara Harbour that won Cheshire the 2014 Home of the Year award. The cabins attracted a storm-in-a-teacup of talk-back controversy from some that found them “ugly” and “offensive”. “I thought the architect was asleep at the time he designed it,” a Kaipara local told 3News. What some saw as a lack of design is, for Cheshire, a comment on the way New Zealand is wasteful of space and a “direct critique of they way others live their lives in the same way that Britomart is a critique of the laziness of High Street”. 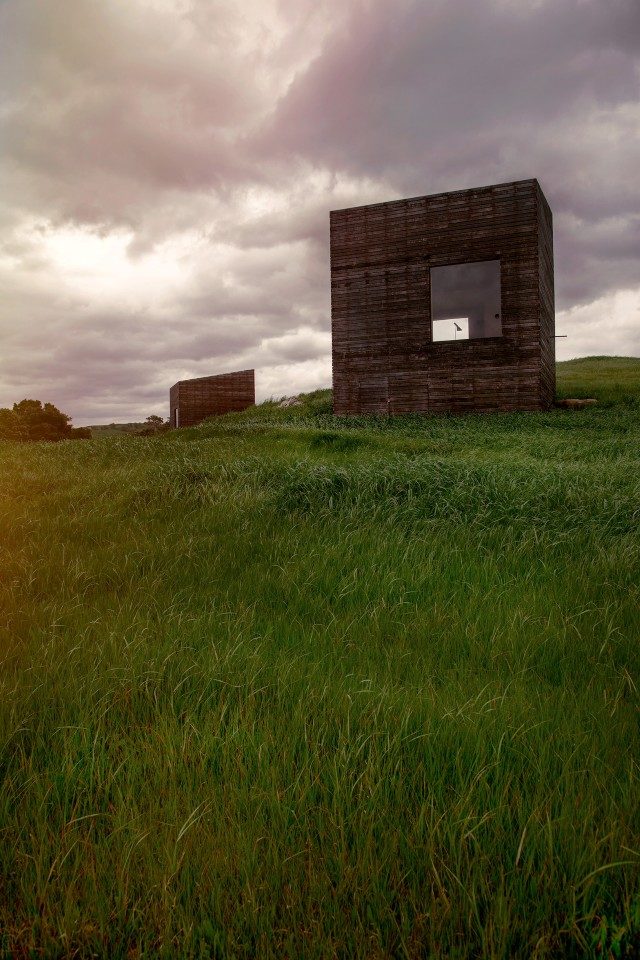 Award wining home "eyrie" is a “direct critique of they way others live their lives in the same way that Britomart is a critique of the laziness of High Street”, says Nat Cheshire Photo: Jeremy Toth

Cheshire acknowledges and almost enjoys the creative destruction necessary to remake a city. “Auckland required reconfiguration in order to have any believable exciting future. For decades this city has suffered, above all other things, from diffusion and we were always really clear that the promise of Britomart was not only in itself but in its ability to displace the mass of the city down towards its water edge,” he says.

“It is necessary for the total reconfiguration of Auckland that, in the short term, streets like High and Ponsonby and Parnell are stripped in order to pull that mass down towards the water. Because this is where it belongs. This is where the future of Auckland is. Auckland was a city without a city. And that’s been the fundamental battle. To give Auckland city it’s city.”

“What we are trying to do with the city itself is intimately connected to what we’re trying to do in the residential space. The city has to be a great enough place to live your life. Where you go home to sleep and love doesn’t necessarily have to carry the burden that our homes presently do,” he says. “That’s a far more exciting way to live. The city itself is your home.” And Cheshire’s home, Auckland, is his life. The restaurants and retail and homes are all part of a unified vision of city’s future. A vision that he has a unique opportunity to make concrete. “There’s nowhere else on earth where I would get to do what I get to do at the moment. I’m so f*&king lucky,” he says. “The opportunity is just so enormous I just think ‘F*&k you if you go to bed. F**k you if you sleep through this’.”

“It’s such a great privilege to have something so special to fight for and to actually believe in. And now, to see that it’s a fight that’s worth fighting and it’s winnable and it is being won. I just can’t ask for more than that out of a life.”

Nat Cheshire is speaking at Semi-Permanent Auckland, which is being held at the Aotea Centre tomorrow and Saturday.

This content is brought to you with funding support from New Zealand On Air.