As part of a project on reviewing and arts criticism, The Wireless is featuring reviews from the shows of the New Zealand Festival. Fleur Rodway looks at Deca Dance by the Batsheva Dance Company of Israel at the St James Theatre in Wellington.

Deca Dance began before I had a chance to take my seat. A suited figure alone on the bare stage flickered, jerked and rippled as the audience filed into the auditorium. With the house lights still on, he jived to a jaunty tune as other dancers joined him one by one on the stage. 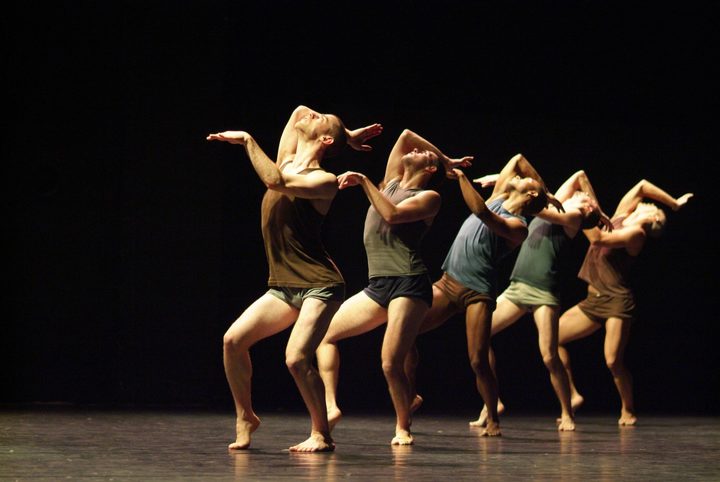 Founded in 1964 by the Baroness Batsheva de Rothschild, the Batsheva Dance Company started as a vehicle for the artistic visions of Martha Graham. Fifty years on and Batsheva now speaks in ‘Gaga’, the movement language of the company’s current artistic director, Ohad Naharin. As a way of moving, Gaga endows the dancers with gentle precision and explosive power.

Deca Dance was originally staged to celebrate Naharin’s tenth anniversary as artistic director of Batsheva. The work is a series of excerpts from Naharin’s other choreographic works and this structure makes Deca Dance an accessible and appealing introduction to his repertoire.

Accumulation of words, movement and music was a particular feature of the second choreographic sequence. The curtain rose on a large semi-circle of dancers seated in chairs around the outside of the stage. Spoken fragments of a Charles Bukowski poem, ‘Making It’, accrued in the silence.

‘Echad Mi Yodea’ broke the hush. This accumulative song performed by Israeli rock group Tractor's Revenge was loud. The movement was also loud and impassioned, particularly when the dancers flung their limbs wide and threw their sternums towards the ceiling in an explosive Mexican wave.

In a duet performed to the music of Vivaldi the dancers’ bodies rippled across the stage, their corseted figures interlocking as if they had never been parted.

Limbs skimmed through the air and beads of sweat hurtled from the dancers’ skin.

One of the most delightful moments occurred when a woman who had been escorted onto the stage to dance along with several other members of the audience was left standing alone, the bodies of the Batsheva dancers crumpled on the ground around her. She raised her palms to the ceiling with an exquisite and perfectly-timed expression of “what the?”. This fleeting moment demonstrated the ability of a simple gesture to convey emotion so effectively it could have been planned.

The section from Black Milk (1985) was performed with an incredible freedom of movement. Limbs skimmed through the air and beads of sweat hurtled from the dancers’ skin. The bodies of the leaping men created achingly beautiful arches in the air, though some did manage an extra release mid-air, which enabled them to hang just a moment longer above the ground.

The final section of the performance was the most challenging, but ultimately the most rewarding. Accumulation again was a feature of this section. The dancers, arranged in three lines of six, seemed to be improvising, sometimes following the dancer in front, sometimes coming up with their own sequences, sometimes dropping their pants. It was impossible to see all that was going on, but exciting at the same time.

In the final moment of the performance a figure threw himself across the darkening stage, looping and curling like calligraphic script. This image, I think, will remain with me for some time.

Advertised as a ‘degustation of dance’, Deca Dance did indeed offer a taste of Naharin’s choreographic oeuvre – and I now want more.