Members of a Tauranga hapū will be taking time off the marae this summer to keep an eye on visitors to a dangerous waterfall that has proved irresistible to snap-happy tourists. 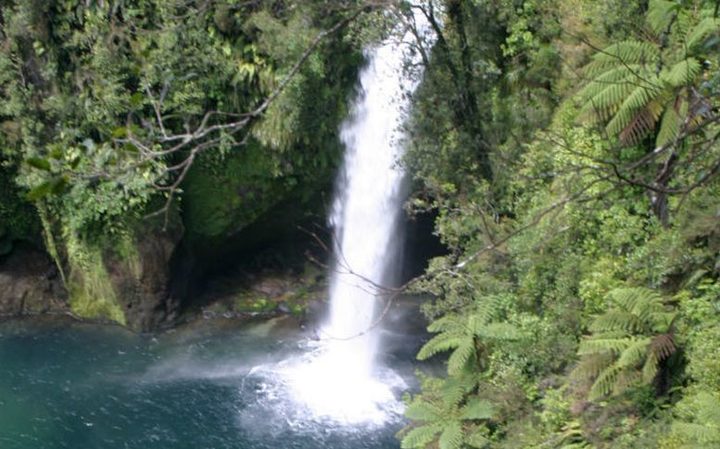 The Omanawa Falls in the Kaimai Range near Tauranga can only be accessed by climbing down a hazardous cliff face. The falls have always been closed to the public due to safety concerns.

In 2018, one person drowned at the falls, in addition to a number of people getting seriously injured getting to the falls or having to be rescued over the years.

But danger signs attempting to keep people away from the site - both locals and tourists - have been ignored for a number of years, as seen by the thousands of pictures posted on social media of the scenic waterfall.

As kaitiaki of the area, members of Ngāti Hangarau hapū will be stationed at the entrance of the falls until April 2021.

Hapū spokesperson Koro Nicholas said the main aim of kaitiaki being at the falls was to look after the whenua and the mauri of the Omanawa River by educating people on the significance of the site to local Māori.

He said people illegally climbing down to the waterfall - along with those who had been injured or died - affected the mauri and the wairua of the place which was precious to mana whenua.

"We've noticed over the years, no matter how wide or how high you build the fence, people will still find a way around it. It's such a huge social influence out there.

He said the hapū has been in the area for a thousand years and want to share their knowledge of the history with manuhiri (visitors).

"As part of our role as mana whenua, we want to be able to relay our stories and inform people of the kaupapa, the wairua and the mauri of the place, so they can use it appropriately."

He said this was the first time the hapū had tried the educative approach as kaitiaki.

"We're not going to put our people in harm's way. Some of the people that go up there aren't the nicest people, and they have a set course in mind," he said.

"If they still chose to go and something bad happens, well that's pretty much on their head. What we'd rather do is sit down and have a cup of tea with them at the gate, and then tell some stories."

He said the hapū wants to establish that respect for the falls in the local community, visitors and also companies, such as Trustpower.

"People don't know what they don't know. Some people are ignorant, some people are ambivalent about things like this. What we can do to be a bit more proactive and as a long lasting solution is to educate people instead of moaning and just saying no all the time.

"If you can educate them and tell them the reasons why, you've probably got a higher chance of changing their mindset and behaviour.

"In the end, we decided the best course of action in the long run is to provide safe access to the falls. It's not there yet, but we are in the process of getting that safe access built."

Ngāti Hangarau hapū was working with the Tauranga City Council and Tourism Bay of Plenty to create safe access to the falls, including a viewing platform.

Construction is expected to start in 2021.