Funeral home directors in Auckland are unsure what to tell whānau who have planned funeral or tangihanga services over the weekend or are expecting someone to die. 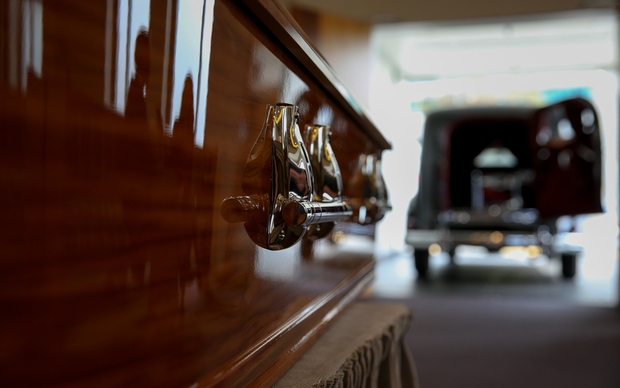 Under alert level 3 only 10 people can be present at a funeral home or service at any one time, and tūpāpaku cannot be taken home.

Funerals and tangihanga services must take place at a funeral home, and services at marae or churches should be avoided.

Haven Falls Funeral Services director Michelle Pukepuke said the three-day lockdown period was a difficult timeframe to be able to plan ahead, and whānau were growing increasingly anxious.

"It's really difficult, especially because it's only three days. We don't know what to tell people," she said.

She said some whānau already mourning loved ones would struggle to change their plans at such short notice.

"We've got a big funeral service in Auckland today in Waikumete. They are gathering in the chapel and then they're going up to the plot, and they've been anticipating 300 people.

"That is really our immediate concern, and the whānau we've got with services over the next couple of days."

She said many families were still confused about the rules.

"We are just reminding them that only 10 family members can be with the tūpāpaku at any one time, and tūpāpaku can't go home, they have to stay with us."

Places outside of Auckland need to follow level 2 rules for tangihanga, which include a limit of 100 people at a funeral service at any one time.

"For whānau who are in level 2, tangihanga can still take place at marae or in public spaces, however, we encourage them to undertake contact tracing, social distancing, sanitise, and consider how they practise tikanga in regard to harirū and so on," he said.

Funeral Directors Association president Gary Taylor said some families were differing their planned funeral services until next week in the hope that the restrictions would be lifted by then.

"Next week is still up in the air for a lot of families, and differing the next week doesn't necessarily guarantee them the ability to gather and mourn their dead but, certainly, deferring is one of the options that they are looking at."

However, the iwi trust chief executive Jamie Sinclair said they were not forced to cancel any tangihanga as a result of the restrictions coming into place.

The Ōrākei urupā was still open for burials.

He said if whānau did lose a loved one over the next few days, they should get in contact with the marae managers to set up alternative tangihanga arrangements.

"What we're looking after is the wellbeing of all of our whānau as well as the safety and security of those who are in and around the marae and that whānau who are connected," Sinclair said.

"We'd encourage our whānau to seek guidance from the guidelines established by the ministry but also through our connections through our marae manager to do it the best way that they can."