Supporters of an appeal to stop a major water bottling consent heckled from the public gallery of the High Court today, as lawyers for Creswell New Zealand Limited defended its bid to take a billion litres of water a year from the Awaiti Aquifer. 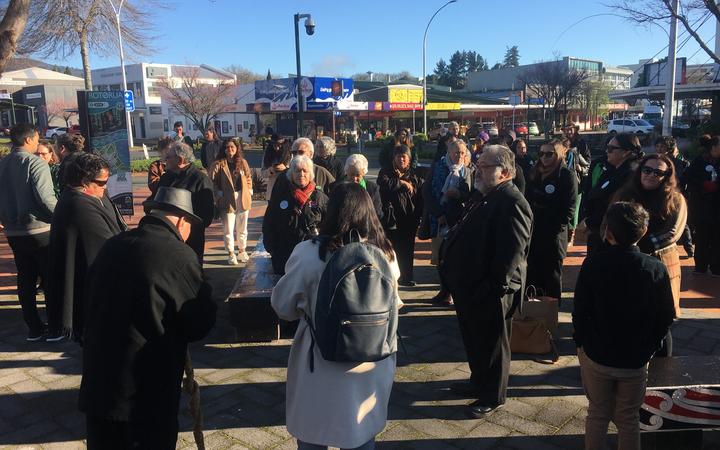 Ngāti Awa is challenging the Bay of Plenty Regional Council's decision to grant the company consent to expand an existing water bottling plant near Whakatāne.

The court was interrupted on several occasions as members from the public gallery shouted "greedy" and "we don't want your jobs".

Creswell New Zealand Limited - a subsidiary of Chinese Company Nongfu Spring - not only wants to take more water from the aquifer, but build two new bottling lines, each producing 72,000 plastic bottles an hour.

Te Runānga o Ngāti Awa believe that will have an irrecoverable impact on the mauri - or life force - of the water, because once the water is bottled and exported it's gone forever, making it impossible for its mauri to be restored.

Evidence provided to the Environment Court by the runanga noted: "Once lost from the system through the export of the water, the mauri cannot be restored. Only by retaining the water within the water cycle in Ngāti Awa's rohe can the mauri be retained."

"The Environment Court instead preferred the evidence of another esteemed kaumātua of Ngāti Awa, and indeed the vice chair of Te Kāhui Kaumātua... that's a body formally tasked with advising Te Runānga on matters of tikanga, and found that there is no loss of mauri from the water."

Creswell consulted directly with Eruera during its planning stages, and was advised that while mauri can be depleted it can also be restored through tikanga practices.

Evidence provided by Eruera to the Environment Court noted: "When water is extracted it carries mauri with it, but as it is replenished by rainfall the mauri is restored as it returns to its original source."

Randall told the judge every requirement under the RMA was met by his client.

Randall noted the proposed water take was well within the interim allocation of water.

He also referred back to a key finding of the Environment Court last year - that the impact of plastic waste was outside of the court's jurisdiction because bottles do not require a resource consent.

Ngāti Awa has argued that because the Environment Court constrained itself in that respect, it therefore failed to comprehensively assess how the bottling of the water - and the export - could have cultural impacts at a local level.

However the lawyer for the Bay of Plenty Regional Council, Mary Hill, rejected that.

"The issue was clearly framed in this way by the regional council before the Environment Court, that mauri and tikanga effects are personal experiences occurring at the source where tangata whenua are situated, rather than where the end-use occurs."

She said the three expert planners - who were called to give evidence at the Environment Court - supported her client's view that the proposal did not impede on kaitiakitanga.

"The important point in my submission, sir, is that all planners did agree that the plans provide comprehensive provisions regarding kaitiakitanga."

The Whakatāne District Council will present its submissions tomorrow.