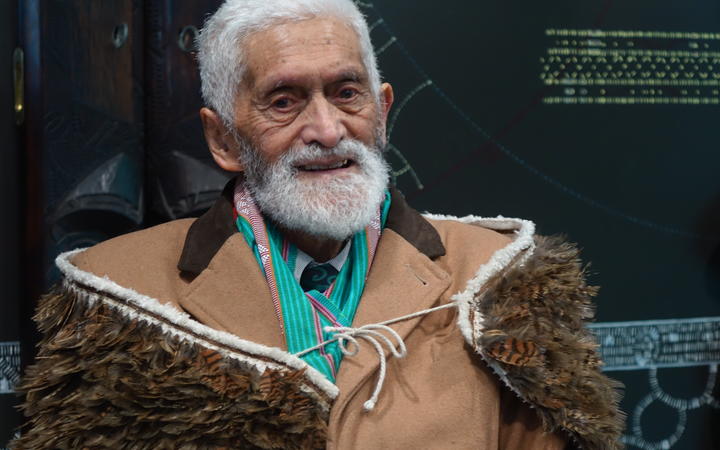 In 1985 he led the Wai 11 Māori Language Claim which asserted that te reo was a taonga, and the government was obliged to protect it under the Treaty of Waitangi.

Under his guidance, representatives from every major iwi appeared at the hearings to demand that te reo Māori be recognised as an official language of Aotearoa.

One witness told the tribunal, "Ka ngaro te reo, ka ngaro tāua, pērā i te ngaro o te Moa". If the language be lost, man will be lost, as dead as the moa.

"I met Huirangi first 30 years ago when my wife and I returned back to her base in Taranaki and Huirangi had returned as well," he said.

"There were very few speakers, Huirangi was one of the few, and their task was to try and revive the mita of Taranaki. From there, we built a relationship over many. We built up Māori language communities at Rangiātea, New Plymouth, and we've managed to get a radio station up and running."

He said Waikerepuru carried the aspirations of Māori to the government, and to the courts.

"This is a gentleman who was at the forefront of Ngā Kaiwhakapūmau i te reo Māori, who carried the claims, dreams and aspirations for Māori language to the forefront of the country as well as the courts of the lands, and to government.

"He never let go of tino rangatiratanga. At every hui he spoke at, he spoke of that ability, that desire and that dream, which our people have always had, to be independent and make decisions about our own lives.

"A huge legacy, a huge loss to te ao Māori. He was a wonderful man and a wonderful character. He will be missed."

Waikerepuru was a driving force behind the establishment of Māori media entities such as Te Māngai Paho, iwi radio and Māori Television.

He was a presenter on Te Ūpoko o Te Ika Māori Radio and an active union member in TEU, ASTE, and ATTI.

He was a Companion of the New Zealand Order of Merit and received a lifetime achievement award at the Maori language awards in 2016.

Flavell said his thoughts were with his whānau at this time, who were grieving during unprecedented times.

"It's a hard thing that I think everyone is grappling with, the ability to do what is inherently a part of us which is to tangi and grieve and see the person right in front of us.

"We're stuck here in Rotorua and we would have been in the car straight away to Taranaki to give our best wishes and to give our condolences to the family, to speak to him as he spoke to us, and to honour him.

"Whatever way we can, we will remember that gentlemen. One thing I hope that people do is to continue to talk about Te Huirangi Eruera Waikerepuru. If we keep mentioning their names they stay alive in our hearts."