The chair of Te Rūnanga Ā Iwi o Ngāpuhi says she has new hope and optimism about negotiations with the Crown following the Minister for Treaty of Waitangi Negotiations whaikōrero yesterday. 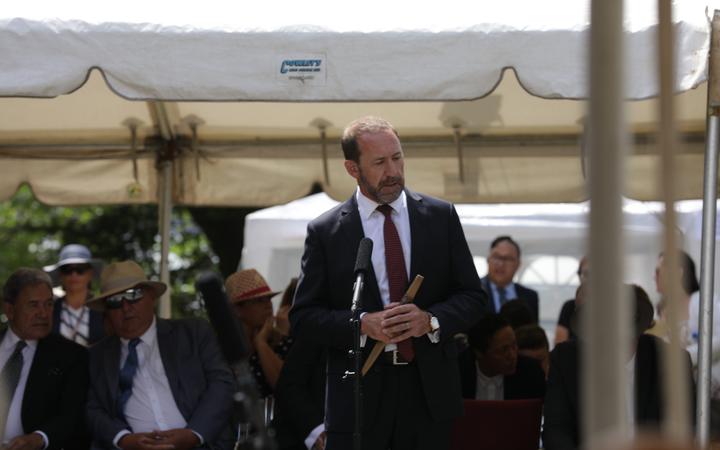 As the political day at Waitangi came to an end, there were many other politics in te ao Māori on display.

The new chair of Te Rūnanga Ā Iwi o Ngāpuhi, Mere Mangu, took to the paepae yesterday at Waitangi to welcome politicians - a move that faced both criticism and praise from those gathered.

A wahine taking the paepae at Waitangi is not new - Te Puea, Dame Whina Cooper and others have spoken at pōwhiri at te Whare Rūnanga.

But that didn't stop heckling from men telling her to be quiet and sit down.

Mere Mangu said they were ignorant - if they knew her whakapapa to the great ancestor, Hineamaru - they would not have thought that.

"He kūare, in every way about tikanga you would never do that unless you know somebody's whakapapa, no-one knew our whakapapa.

"It's time for change, I am in the position why should I be treated differently, ko au te reo o Ngāpuhi."

The coalition government was received well yesterday - with Minister for Treaty of Waitangi Negotiations Andrew Little doing his whaikōrero in te reo Māori.

Today Little told Morning Report that he started taking lessons in 2018, but the combination of his schedule and the person teaching him meant he didn't get a lot.

He said Kelvin Davis and the prime minister had talked with him about the prospect of delivering the speech in te reo Maori, and he was "happy to take up the challenge".

Mere Mangu said it had given her a new sense of optimism and hope for negotiations with the government with Ngāpuhi.

"Andrew Little made my heart sing, made me shed some tears, we have had him for two years walking with us during our settlement negotiation so far, just in chatting, he has taken all that learning to heart, learnt the reo, and opened his heart for us to see, to show much how he has learnt along the journey."

Little said that had shifted his thinking in how he would move forward with the settlement with Ngāpuhi - which had essentially been on hold since a new evolved mandate was voted down in 2018.

"The speech reflects the fact that after two years of engaging with Ngāpuhi I have learnt a lot more, I have found out what is important to them, I have engaged with some pretty amazing people.

"My journey has moved significantly and is continuing and that is the basis I hope that we can work together toward a redress."

Ngāti Hine has made it no secret they want their own treaty settlement separate from Ngāpuhi ,and Ngāti Hine kaumātua Waihoroi Shortland reiterated that message to Little again today, saying he wants the Crown to deal with them, and them alone.

"Ngāti Hine do not want an apology, we want acknowledgement, it will not be in our settlement clause, because an apology from the Crown only eases the Crown's conscious only."

With many meetings ahead for Ngāpuhi to discuss and design the new hapū and takiwā-based settlement structure - the question will be whether a well meant whaikōrero will truly go the mile.

Little told Morning Report that Mere Mangu had brought new energy and drive to the position.

"The sense I get is there's more kōrero going on, and constructive kōrero, about how do we pick up the opportunity and make this work?"

He said he stands by his message that he has been giving that he's open to ideas on how the settlement is structured.

"Whether it's six groupings of hapu, or it may even be more than that, but on top of that there are issues that are common to all hapu of Ngāpuhi, whether it's the economic deprivation, suppression of language, even the issue about He Whakaputanga and what that means and how we respond to that, that's a conversation we need to have with all of Ngāpuhi not just bits of it or in groups.

"We will find a way to have that dialogue."