An Auckland iwi displaced from their land for 180 years has called a compromise on the future of Point England reserve a "win-win". 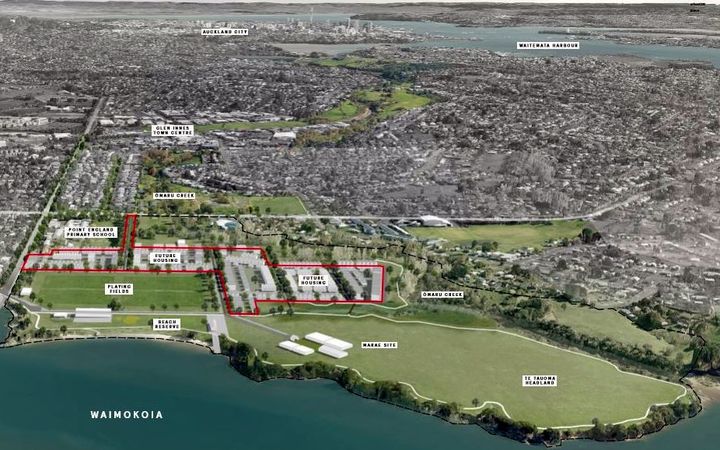 The area in red had been proposed for development. Ngāti Pāoa will now instead get an extra 2ha their marae and papa kāinga, as well as the option to purchase Auckland school sites. Photo: Supplied

Ngāti Pāoa are forgoing an almost 12ha property development at Point England after locals raised concerns about losing green space in Tāmaki Makaurau back in 2017.

Instead, the iwi will get an extra 2ha for their marae and papa kāinga housing plus the option to purchase Auckland school sites so they will still be able generate income.

Those who campaigned against the original deal were still not convinced the new plans would not disrupt the environment.

The reserve will be in Ngāti Pāoa's name, but co-managed with the Auckland Council.

Ngāti Pāoa Iwi Trust kaiarahi Haydn Solomon said it was a win-win for Crown and iwi.

"It's a very bright future in the sense that, one, it's the biggest piece of open space land that's this close to the CBD; two, it is our whenua - so, that's important to us, it's about that repatriation."

He said the iwi would restore Tāmaki River and Omaru Creek, to support native bird habitats.

"A promise was made that we're giving them an opportunity to a housing development - it was a commercial housing development so they would've expected to yield some income from it - but the reality is this deal gives them the same value but it's just a different format."

He said the rental income the iwi made from the Auckland school sites they could purchase would replace losing the commercial site.

Pt England resident Julie Chambers, who campaigned against the housing development, was not convinced the revised agreement still protected the reserve.

"While is seems to be that there's progress and that this won't be as damaging as the initial proposal for public housing right across the area I'm hoping that the footprint will be more sensitive of the open nature character of the Point England headland."

Chambers was still concerned that road access to the marae as detailed in the previous plan could still destroy the natural environment, but Solomon was confident the iwi could build in harmony with the Point England surroundings.

The revised deal will be voted on by Ngāti Pāoa iwi members from 3 February.

If it is supported by iwi members, and there are no overlapping claims, the Ngāti Pāoa Deed of Settlement will go to Parliament for approval this year.