Women on probation in Whanganui say learning about make up and fashion could be the ticket to turn their lives around. 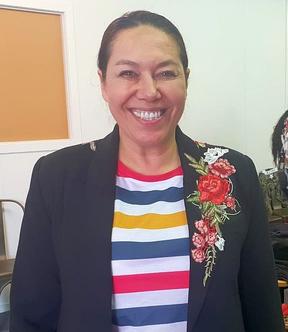 Te Korowai Aroha is a three-day workshop for women serving community-based sentences, some with ankle bracelets.

It includes teaching them about hair, make up and fashion, as well as how to walk down a runway - a daunting prospect for the women on the programme late last week.

"After the first march, I felt like an idiot, but I thought to myself 'well I'm not the only one who feels like idiot'," one woman said.

"So we'll all just be a great big bunch of idiots and have fun - you have to wiggle your butt."

The goal of the runway walk is to teach the women how to carry themselves with confidence, and one woman noticed immediate results.

"I had another meeting to go to last night and I walked into the hall and all these people looked and me and they said, 'there's something different about you'," she said.

"And you know what I did? I said 'I know' and I did the half twist and they said 'where have you been all day?'

Holding back tears, she said the programme had given her hope.

"Yeah, it really lifted me, and it's holding my shoulders back."

The women also learn how to wear natural make up and what clothes suit them.

Programme founder Carla-Jayne Smith said that was foreign territory for most of the women, many of whom said they never dressed up or wore make up.

"We take them through the three-day workshop, we talk to them about their hair, make up, putting together wardrobes.

"At the end we do a reveal and it is at that moment where we get that feedback from them where there's tears.

People donate clothes to the programme and there are also affordable options at second-hand shops, Ms Smith said.

Mrs Smith said once the women learned what clothes and fabrics suited them, they knew what to look for when going shopping. One woman reached for a pencil skirt and asked Mrs Smith what it was.

Presentation is important for a job interview and the ultimate goal was to help the women back into employment.

Women on the programme also work on their CVs and hone in their job interview skills.

Mrs Smith said those who have offensive tattoos that are visible can get them covered up at no cost.

The programme has participants create vision boards and encourages them to set goals for the future.

Sitting in a circle, some women talked about wanting to build their confidence after going through the justice system.

They talked about how hard it was to make time for themselves within their whānau, and that they often cast their own needs aside.

But one young mother said the programme was a game changer.

"For myself, I have been through a lot - and seen the darkest times I think, so this programme has really put me to a higher perspective of life," she said.

Another participant said she was pleased with the course, and surprised herself by wanting to attend all three days.

She said she had never participated in this type of programme in all her years in the justice system, and wanted to see it expanded.

During the workshop, Nayda Te Rangi gave a presentation about her road from being the wife of a gang leader to leaving the gang and earning her masters degree.

It's a story of bravery and triumph that offered some in the group a light at the end of the tunnel.