The spirit of competition is thriving amongst Māori elders in Whanganui as more than 50 people take part in the Taipahake kaumātua olympics. 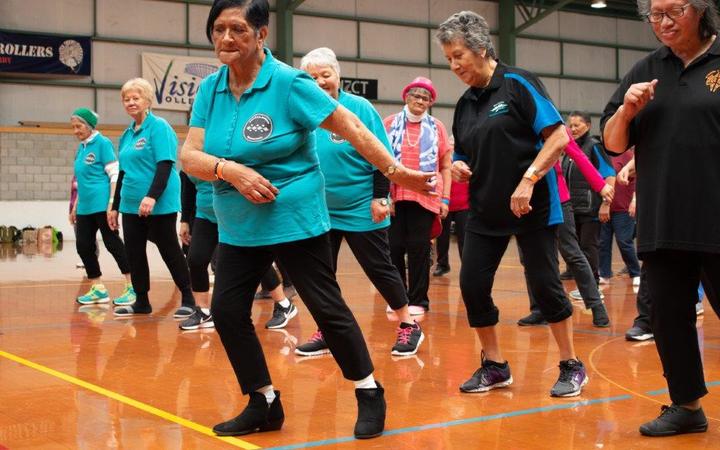 Despite many admitting their bodies aren't what they used to be, several groups participated in shot put, discus, javelin, and kicking a ball into a goal.

It was a hive of activity at the Jubilee Stadium today, with a live DJ and an old-school playlist to get the blood pumping.

Pūtiki kuia, Doreen Ngatoka Hogg, was happy to get amongst and said she played a lot of sport back in her day but that was not the case anymore.

"I like to join and learn to play all the games, because it is good for us the legs, the arms, the eyes, the ears! It is lovely to meet new people too," she said.

"I like sports, I really do. I used to play hockey, marching, netball, rugby - I love all sports.

"I'm a caregiver now darling, but it is good to be here with the people."

The kaumātua were advised that if the shot put was too heavy, or if they had a sore shoulder, that they could throw it underarm into one of the hoola-hoops on the court.

Ireene Paama, 71, said the event was about meeting people and having fun, which she said is easier to do when you're older.

"We are doing shot put and we have got one so far! It's fun," she said.

"It just gets better - because you are more relaxed, you haven't got any worries." 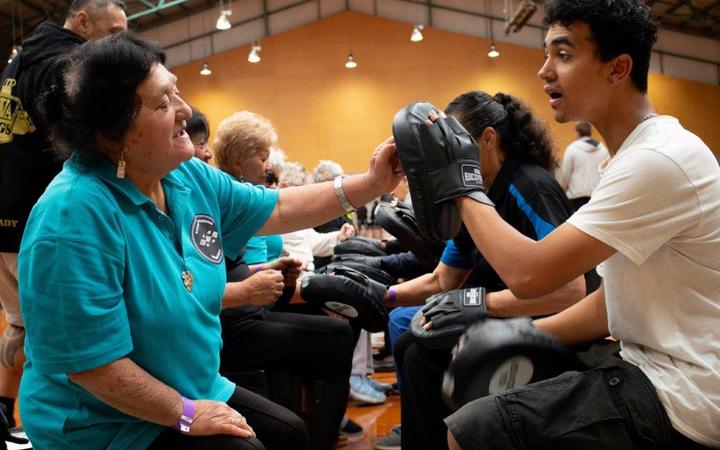 Kaiawhina Lee-Arna Nepia was running the javelin, where the traditional spear was replaced with a foam noodle equivalent.

She was thrilled to score four points at the goal kicking station - despite suffering a stroke that left her limping, and having cancer and diabetes.

"I am here to be with my whānau, to be happy and be stronger and be with my uncle over there - to be catching up with the whānau."

Rona Martin, 84, cast her zimmerframe aside to give it a go too, and was helped up to kick a few goals.

"I just love being here, even though I'm not 100 percent, but just the thought of being here makes me feel good," she said.

Like any official sporting event, first aid respondents were on stand-by, including nurse Sandy Taylor.

"We had to taylor the activities that they do because sometimes they get too hard out - and can injuure themselves quite easily," she said.

"But you can't take the competitiveness out of them."

If the traditional games were not their thing - there was also line dancing in the stadium - where a group of kuia who practice their steps every week got to show off their skills.

"There's something for them to come to - and a meeting place - just them mingling. I'm so proud of them coming out," she said.

Mrs Maihi said whakawhanaungatanga - or forming and nurturing relationships - was a key feature of the event - and everyone agreed.

Two koroua practicing some light sparring joked about needing to stop before they had a heart attack, before everyone received awards for taking part.