Wellington City councillors were divided today over the reference of the Māori god of the sea, Tangaroa, in a document referencing climate change. 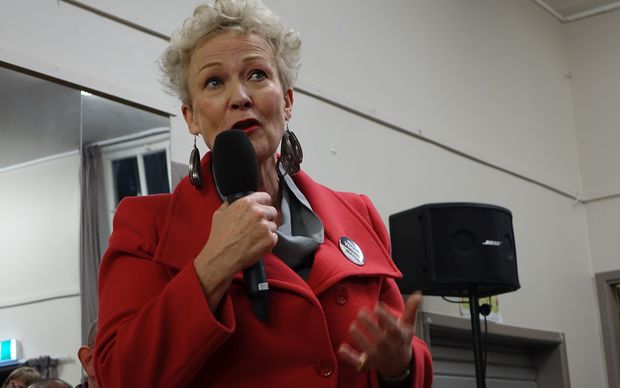 Wellington City councillor Nicola Young says all references to deities of any denomination should be removed from the climate change document. Photo: RNZ / Nina Fowler

Councillor Nicola Young wanted the wording "Tangaroa is taking back some of the reclaimed land in the CBD" removed from the document.

She wanted all references to deities of any denomination removed, due to the scientific nature of the document.

Some councillors agreed it may not be appropriate.

"I'm incredibly conflicted, I have tried to try to champion integrating Māori language and culture into our processes, but I'm also an atheist and will not support the introduction of religion."

Ms Pannett said the environmental movement have desperately tried get humanity to acknowledge they have caused global warming.

"We keep hearing about acts of gods, it is nothing to do with god, we did it," she said.

"It does stick out a bit in context of the rest of the text in that section, I'd be comfortable with it going elsewhere," said councillor Diane Calvert.

However, there was heavy push back from others.

Councillor Jill Day was one of the councillors who spoke out against the amendment.

"Actually, we're talking about trying to reach other communities to get them to interact and doing something like this helps people to interact," she said.

"I think also sometimes through amendments like this we show our lack of understanding of cultural context and I know it's challenging, but maybe we need to educate ourselves."

Ms Fitzsimmons said there should be more storytelling to encourage people to engage and understand massive challenges facing humanity like climate change.

"I'm pretty surprised to see this coming from councillor Young who is someone who holds the Arts portfolio and we know that through ballet and music often stories and metaphors are told," she said.

In the end, it was decided both Ms Day and Ms Young would come up with the wording together.