On the back streets of Onehunga, between the local primary school and a busy supermarket car park, a huge mural of wahine Māori is turning heads. 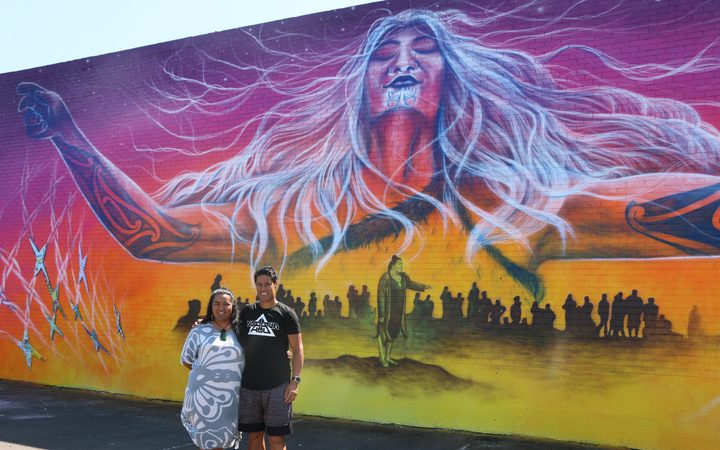 In a powerful message, the mural features local champion Amiria Puia-Taylor (Ngāti Te Ata Waiohua/Ngāti Tiipa), and it is more than her face on a wall. It's an acknowledgement of her work in the Onehunga community, said artist Bobby MacDonald.

They call her The People Weaver, a name that came about from a conversation she had with an uncle about her ancestor Huakaiwaka, who was a paramount chief of Tamaki.

"Hua saw value in everyone. He saw the strengths and weaknesses as value to weaving all of them together to make Tamaki a stronghold," said Amiria.

Amiria is a co-founder of the thriving community hub in Onehunga. Her mission is to help Māori and Pasifika youth thrive and succeed in the community.

In her line of work she's developed the same traits as Huakaiwaka.

"I see the strengths in everyone and I see the importance that everyone can be at the table."

Amiria said the colors of the mural spoke of her aura and energy.

"The concept of having the big beautiful Hineteiwaiwa, the artist has extracted my superpowers of a people weaver and gone and researched the Māori atua (god) that aligns best to it which to him has been Hineteiwaiwa."

Hineteiwaiwa was the Māori goddess of weaving and fertility.

"I still get emotional," Amiria said looking at the mural.

"Within our Māori and pasifika whānau we don't usually toot our own horn. We have a strong sense of humility but within that we miss out a lot on the moments to celebrate the achievements that we do do." 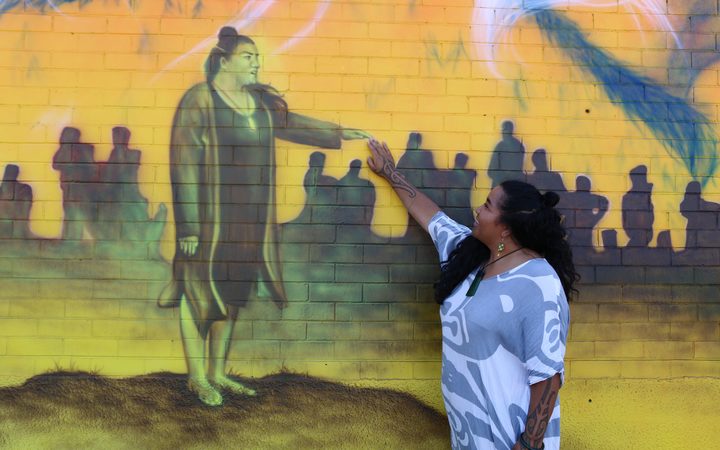 Amiria Puia-Taylor reaches out to the image of her on the mural. Photo: RNZ / Eden More

Today is International Women's day and Amiria is reminded of the recent celebration of 125 years of women's suffrage.

"It's really powerful to know that there was a period of time where we were male dominated and women didn't play a role.

"And now here we are we have the privilege and luxury of celebrating us as women being in the same shoes as men." she said.

Amiria said she has the freedom now of doing what she does and having a voice because of the women who paved the way before her.

However, she still acknowledges the men she has had in her life.

"I believe that the role of the mana wahine derives from being surrounded by mana tane." 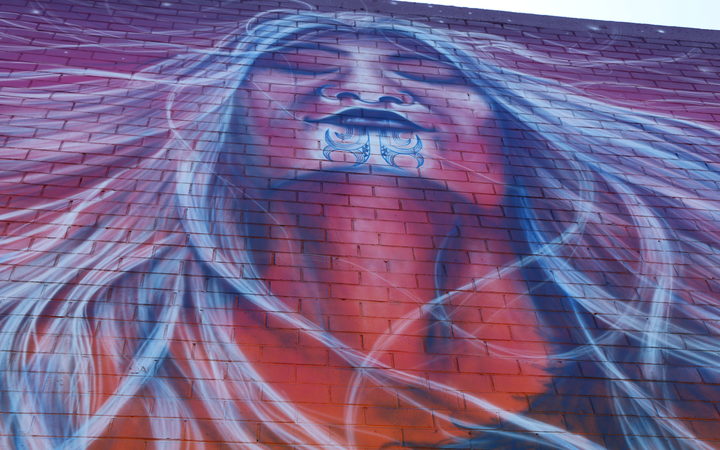 MacDonald says the mural is part of his Ngā Atua Hou project, aiming to return the mauri of the spaces that are painted.

The mural is 22m by 7m in size and was completed just over a week using an air-brush and spray gun, tools he chose as he wanted to protect Papatuanuku and the surrounding environment.

"This project was definitely a dream," he said.

"Dreaming it up with my sister Maria MacDonald, she actually came up with the name, made me think about how big it was."

"It's telling the stories of young tama toa and wahine toa in local communities that are doing awesome things for the people, culture and communities itself."

The project is also a way to tell the stories of Māori history which has helped him connect with his own whakapapa.

"If I'm trying to tell other people's stories, it's important for me to know where I'm from and to learn my language so I'm doing a te reo course."