One of the country's oldest and most well-travelled pounamu hei tiki has returned home to Canterbury for an exhibition. 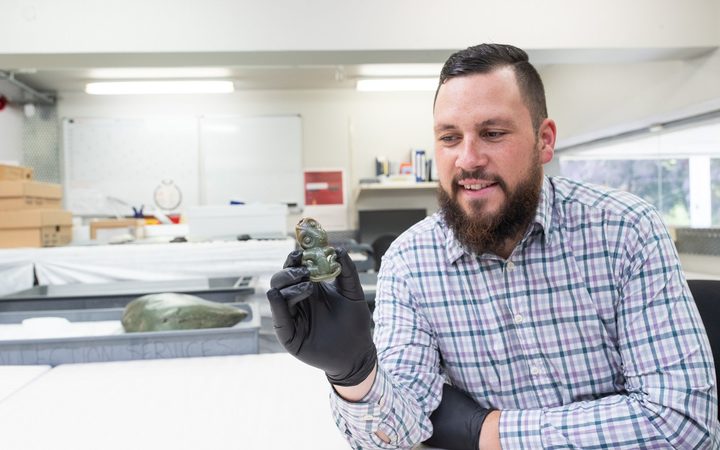 The Te Aika hei tiki greenstone pendant from the early 1700s features as part of an exhibition opening at Canterbury Museum this morning, called Kura Pounamu: Our Treasured Stone.

More than 200 other pounamu treasures are also on display.

For the Museum's Curator Human History, Corban Te Aika, it's particularly special to see the Te Aika hei tiki. It has been in his family for seven generations.

It was buried with his seventh great-grandfather near the Ngāi Tahu settlement of Kaiapoi Pā then exhumed in 1831 when the pā fell to the forces of the Ngāti Toa chief Te Rauparaha.

Corban Te Aika's fourth great-grandfather Aperahama retrieved the hei tiki to save it from being looted by the marauding warriors.

His second great-grandfather sold the tiki to a collector in 1922 when the family fell on hard times and it changed hands several times before spending nearly half a century in London.

In 1991 the Te Aika family, with support from Canterbury Museum, worked with Te Papa to bring it home.

"I'm looking forward to seeing the tiki on display here in Waitaha [Canterbury]," he said.

"It's a significant taonga in our whānau and we are excited that it will be home for the next six months. It is a symbol of the mana of our tīpuna, as are many taonga in this exhibition for other whānau."

Te Aika said it was a beautiful taonga and a fine example of a hei tiki.

"It's got a little chip up on the top but other than that it's probably near on perfect," he said.

But he said its story is its most interesting aspect - and each taonga in the Kura Pounamu exhibition has its own story to share. He said the exhibition covers the origins of pounamu from both a Māori perspective and a geological perspective, how it is carved and shaped, and what it is used for.

The exhibition is a chance for people to experience the "beauty and the might and majesty of pounamu."

"It's inherently connected with our identity as Kiwis, and with extra significance for Māori," he said.

The exhibition, curated by Te Papa and Te Rūnanga o Ngāi Tahu, was originally displayed at Te Papa from 2009 to 2011. It has also toured in China and France.

It will be on show at Canterbury Museum until June next year.