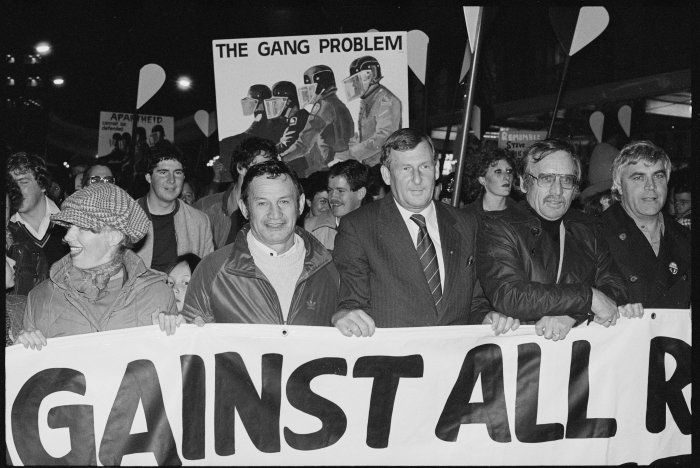 Hiwi Tauroa held the post of Race Relations Conciliator during the 1981 Springbok tour, struggling to heal the deep divisions between anti-apartheid protesters and rugby supporters.

He was born in Okaiawa, Taranaki, in 1927 but is from the Ngāpuhi iwi.

Hiwi Tauroa was the principal of Tuakau College, near Pukekohe, the first Māori to be appointed head of a secondary school.

He came to national attention in the late 70s as a rugby coach, leading the Counties team to three national titles. He was so successful that many thought he should have been appointed All Blacks coach.

In 1979 he was appointed to lead the Race Relations Office.

He became a controversial but respected race relations conciliator who believed a national consensus could be achieved only when Pākehā truly understood the essence of Māori culture.

Under his watch, marae courses for state services were developed and private companies moved to set up race relations units to assist their staff to move away from a monocultural approach.

He worked quietly with protagonists to settle differences that had developed ugly racial overtones and encouraged the use of te reo Māori.

In 1981, despite opposition from anti-apartheid groups, Hiwi Tauroa accepted an invitation to visit South Africa.

He went his own way when he was there and met the people he wanted to meet, including Bishop Desmond Tutu, who later described him as "extraordinarily naive".

When he returned to New Zealand, he opposed that year's Springbok tour.

The tour caused a bitter split in the country, and Mr Tauroa suggested that protests be called off in exchange for the final test being cancelled and replaced with a day of prayer for South Africa.

Neither the rugby union or the anti-apartheid groups accepted his proposal.

Some years later, Hiwi Tauroa said he had been in a no-win situation.

Hiwi Tauroa left the Race Relations Office after 6 years, saying the job entailed a great deal of strain and he did not want an early tangi.

In 1987 he stood unsuccessfully for the National Party in the Eden electorate.

Mr Tauroa established the NZ China Māori Friendship Association in 1984 at the bequest of Rewi Alley and cultivated many Iwi and Māori organisations relationships with Chinese businesses.

In 1988, he became a member of the United Nations Trust Board for Indigenous Peoples.

In the 1990s he was chair of Te Māngai Pāho, the Māori Broadcasting Funding Agency, and was a member of the Auckland Regional Council.

Hiwi Tauroa was made a Companion of the Order of St Michael and St George in 1994.

He is survived by his wife Patricia and six children, 16 grandchildren and nine great-grandchildren.

'He was always the gentlemen'

Māori educator Pem Bird got to know Mr Tauora when he was the foundation principle at Tuakau College.

"In whatever capacity he was always the gentlemen, he was always a very wise person whose presence brought immediate respect and admiration," Mr Bird said.

Mr Bird said he was a pioneer in his role as race relations commissioner.

"New Zealand was surprised when he decided to go to South Africa as part of informing himself about race relations on a global scale.

"He was very proactive in that role and he made himself accessible and he did meet people from all walks of life."

"He started off as a teacher and he was always a teacher.

"I thought his main role was in educating the general public in Māori matters and Māori approaches, their norms their values.

"Many Māori people thought of him as conservative, but ultimately [he was] successful."

Mr Durie said he found Mr Tauora easy to talk to and affable and someone who didn't take himself too seriously.

The pair worked together when the Waitangi Tribunal was being set up in 1975.

"What I thought he did was to help people understand what the tribunal was going to be about, what it's talking on about why is what there.

"There was a great deal of concern about its existence at that time.

"I thought he did the balance I thought he kept the peace very, very well - but by today's standard people would say well it was pretty conservative."

Mr Durie said he was able to achieve a lot from the remote Far North area of Dobutless Bay.

"He brought a great deal of hope to a lot of young people.

"He was a guy operating from a very remote part of the country who could still be successful out there in the public eye."