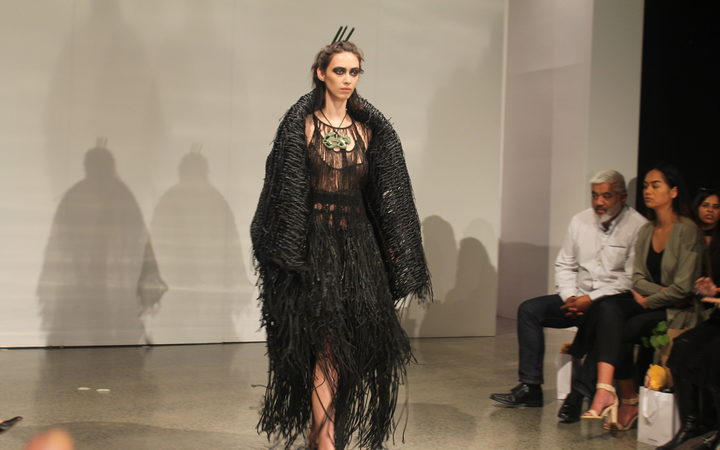 "We don't usually do shows, this is literally the first time in six years, we came in late so we've had four weeks to push out a full collection and that has been challenging," Mrs Nathan said.

Mrs Nathan was personally asked by the founder and strategic director of New Zealand Fashion Week (NZFW), Dame Pieter Stewart, to do the show and she saw it as an opportunity to give back.

"It's a really lovely way of acknowledging all the people who've supported us for the last eight years and to celebrate where we came from, and where we are and put a voice to that."

Mrs Nathan has been working in the fashion industry for nearly a decade and her husband Jason Nathan is the creator of the label's pounamu jewellery.

Her designs have been gifted to celebrities including Beyoncé, Mariah Carey, Demi Lovato and Ed Sheeran.

She is also among one of the 20 Wahine Toa members who exclusively met Barrack Obama during his time in New Zealand.

At the hui, she gifted the former President of the United States with a korowai and carved pounamu.

"I'm constantly being inspired by the whenua (land), the moana (sea), the maunga (mountains)."

She explained the theme for this year's show as "celebrating indulgence in a hard rock way".

"You can definitely tell this is a Kiri Nathan collection, there's lots of woven pieces and pounamu pieces," she said.

As a high-end Māori ascetic ethos company, they have struggled to fit into the retail wholesale market.

"These sorts of scenarios have happened time and time again and for us we're just not as strong if we're not together," she said.

"We're not willing to conform to try fit into other peoples ideas of what we should be."

"Like any business you go through those years of struggle and you're always learning, which is a good thing," she said.

"I don't know if I can have any affect on mainstream but I do know that I can make a difference within the Māori fashion space."