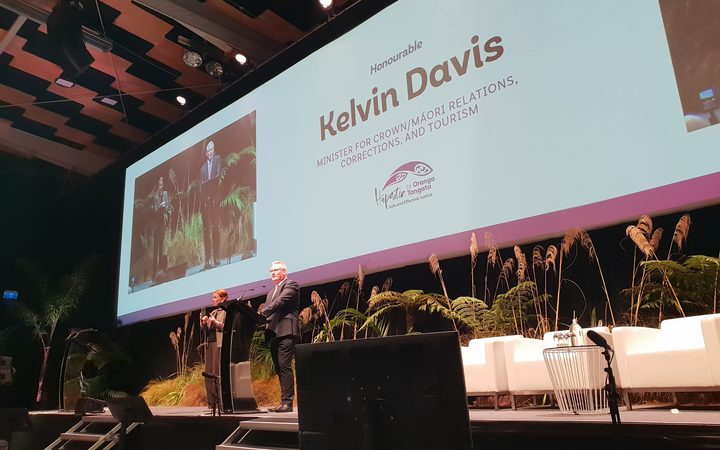 Mr Davis made the remarks at the Criminal Justice Summit today.

Hundreds packed the Te Rauparaha Arena in Porirua for the event, which runs until tomorrow night.

The Corrections and Crown-Māori Relations Minister began one of these sessions this afternoon with stories of his childhood.

"I've had whānau in prison, I grew up in a street where a number of people living there went to prison. They were my mates. I used to build huts with them, swim in the floods and play in the paddocks.

"That's not to excuse the offences these people have committed - but something has to be done to reduce the scale of this problem and the sheer waste of human potential."

And it's worse for women: Māori make up nearly two thirds of women in prison.

He referred to his tribe of Ngāpuhi, saying they're probably the most incarcerated tribe in the world, per head of population.

"There's a massive call for things Māori, and Māori-led things to happen in prisons. Whether it becomes a whole prison or not... There's a whole lot of stuff already happening in prisons around Māori tikanga," he said.

Mr Davis said that's what the summit is for, and why everybody was packed into these sessions today - to work these things out.

Attendee Jacob Leo Skilling, who has been in and out of prison, said he chose to change because of his daughter.

He's now a motivational speaker and was asked to come to the summit by the Ministry of Justice.

"Then incarceration numbers will lessen, re-offending and recidivism will lessen, as with all the bad stuff that happens in our country."

The chief executive of the Ministry of Justice, Andrew Bridgeman, said the officials are listening.

"We know that the only way to get traction is to listen to those people that have experienced the system, and have a view on how the system can change.

"We're not going to know that by being isolated in Wellington - that will never, ever work."

National's justice spokesperson Mark Mitchell agrees Māori have a big role to play if the country is to truly change direction.

"I do agree with that, I think that Māori and Iwi need to take responsibility in terms of stepping up and saying 'yes, we've got big social problems'."

"How can we work with government, agencies and the broader, wider community to actually affect real change in these people's lives?"

But he wasn't sure that, what he refered to as this week's giant "counselling session", was going to affect that change.

"They've got a lot of people here with a lot of knowledge, that have just been put into a very untargeted environment, where it's very unclear what's actually going to come out the other end of it."