A planned cycleway along the coast will cross an urupā - or Māori burial ground - as well as other sacred sites, and cut off access to traditional food gathering areas, Kaikōura iwi say. 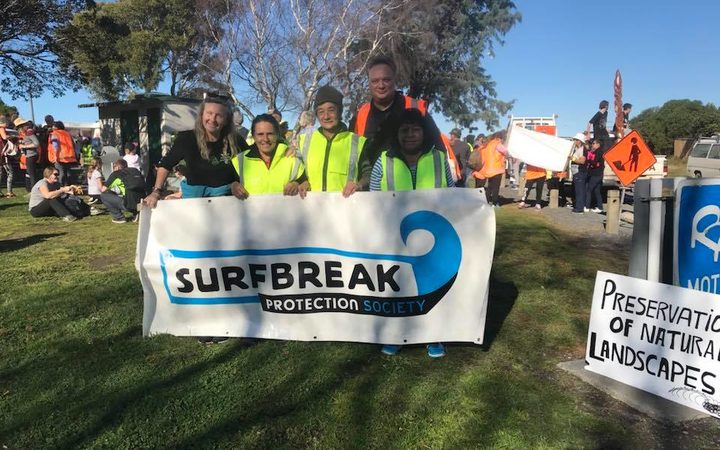 Kaikōura iwi marched marched from Mangamaunu Bay to the district council to protest plans for a cycleway. Photo: Supplied/Save Mangamaunu

Protesters angry about the cycleway that they say will ruin one of the country's best surf breaks took to the streets yesterday.

About 100 or so marched from Kaikōura's Mangamaunu Bay to the district council in protest against the plans.

The government had planned to spend more than $230 million improving State Highway 1 on either side of Kaikōura and creating the new cycleway.

The planned cycleway between Okiwi Bay and Mangamaunu would create a safer way for walkers and cyclists to experience the iconic coastline, former transport minister Simon Bridges said at the time of the announcement.

However, protesters said they were worried the cycleway would ruin the surf break and could stop people getting access to kai moana.

The march, which was posted online to Facebook, was at times confrontational with Kaikōura Mayor Winston Grey taking some flak from protesters.

"Winston, who do you represent? ... You don't represent me because you're standing for the wrong thing," one of the protesters shouted. 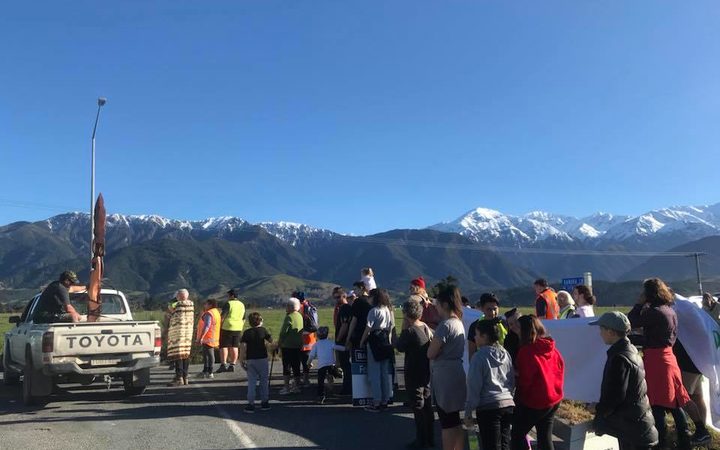 Kaikōura protest against plans for a cycleway which they say will block access Photo: Supplied/Save Mangamaunu

Hīkoi organiser Karen Starkey told Morning Report the cycleway went over urupā, wāhi tapu sites, and would blocked access to which they have had for generations.

"There has been no consultation ... [the sites] have been registered with the Māori land court and these people were actually ignoring our issues," Ms Starkey said.

There were five Wahi Tapu sites along that area of Kaikōura coast, she said.

The Save Mangamaunu Facebook page stated the planned cycleway also crossed over into significant features of the region, including the Kaikōura Whale Sanctuary, two protected Mataitais, and the surf break listed in the New Zealand Coastal Policy Statement.

"We've got trustees in place, they were not consulted so we actually felt really strongly about this," Ms Starkey said.

"Our tribal elders marched with us yesterday, we had an 82-year-old, we had about 10 of our people that are 65-plus who marched all the way. They're really upset about it as well.

"It's been completely ignored and it was put through legislation, under the emergency legislation OIC [Order In Council]."

Ms Starkey said they were asking for full consultation on the plans and designs.

"We were promised yesterday that they will bring us into the consultation with NZTA and KiwiRail with KDC [Kaikoura District Council] that's in the next couple of weeks."